Farruquito, Improvising Flamenco Back to the Future 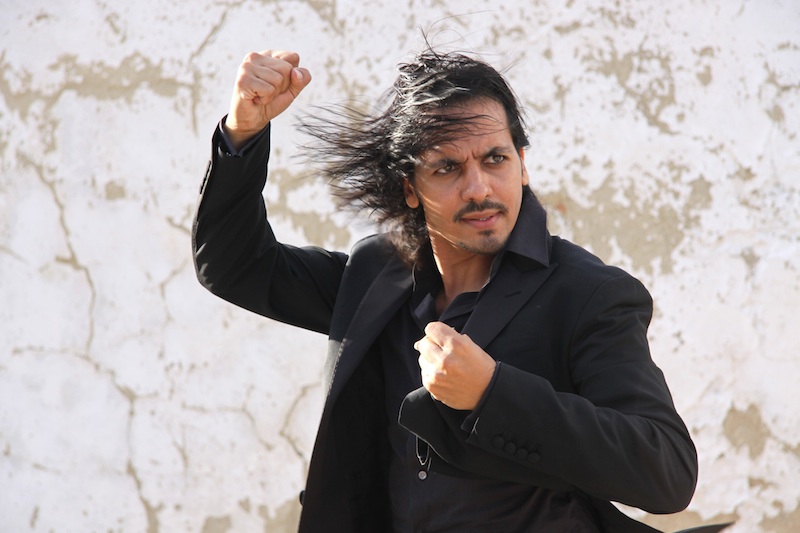 Juan Manuel Fernández Montoya, known as “Farruquito,” was born into one of the grand families of flamenco. His father was the late cantaor Juan Fernández Flores, “El Moreno;” his mother, the dancer Rosario Montoya, “La Farruca;” and his grandfather the legendary Antonio Montoya Flores, “El Farruco,” the founder of a flamenco school of dancing. He will be one of the headliners of the Arsht Center’s extensive Flamenco Festival this Thursday.

Farruquito, who will be 34 in August, was just eight years old when he presented his first show at a Madrid theater. At 11, he was part of a video about singer Camarón de la Isla. The following year he joined his grandfather in Flamenco, a film by Carlos Saura. He was growing up on stage, literally and figuratively, but in 1997, El Farruco died — and his childhood abruptly ended.

Overnight Farruquito, 15, became the repository of a flamenco dance tradition and his grandfather’s legacy. In fact, Farruquito’s life and career have been marked by tragedy. In 2001, just four years after the death of his grandfather, his father died of a heart attack. “On stage, in my arms,” Farruquito once recalled. In an interview published in June, 2003, his mother spoke of how “the child was in shock and spent three months without speaking. Sometimes he dances crying. I only have to look at his eyes.”

A few months after that interview, Farruquito was involved in a hit-and-run accident in Seville that resulted in the death of man. Found guilty of negligent homicide and leaving the scene of an accident, he served a jail term. His actions that night are “something I will have to live with the rest of my life,” he said in a whisper, during a recent interview.

Since the accident and its aftermath, Farruquito has been rebuilding his life and career and reclaiming his place in flamenco. His most recent show, Improvisao (Improvised) comes to the Arsht Center.

Farruquito spoke about the early experiences that shaped his career, the show and the place of improvisation in flamenco.

You first visited the United States as a child., and it seems it was a crucial experience for your development as an artist. How so?

It makes me smile when I see mentions that I “debuted on Broadway at the age of 5.” What happened was that my family was in the show and my mother didn’t have anybody to leave me with, so I traveled with them. I watched Flamenco Puro (which ran on Broadway in 1986) every day from the side of the stage. It was the cream of flamenco. Besides my family there were many other great artists in that show. It was incredible and I didn’t miss one night. I believe it was the greatest, most important experience I had in flamenco.

You have spoken of Improvisao as a return to the source for you. Can you elaborate?

I remember watching my uncle El Chocolate (cantaor Antonio Nuñez Montoya) going to my grandfather’s dressing room and he would start joking with him to loosen him up because Chocolate would get so nervous. And also that’s when he tried things out. He might ask the guitar player to change the key depending how he felt. Those are things I don’t forget. Nowadays that … just doesn’t happen. You know in which key you are singing three months in advance. But how do you know how you are going to feel that night? And things start to get a bit forced and lose spontaneity.

When you put this much time at your craft, as you perfect some aspects of it you also tend to lose others — a certain spontaneity, a certain naturalness. It’s been awhile since I dared to try something improvised. I remember how my grandfather would put me on stage and say ´Dance’ and I would tell him ‘What do I do?’ and he would say, ‘You just dance.’

What does Improvisao mean at this point in your career, then?

Improvisao is about freedom and a certain responsibility.

Freedom because I can do what I want within the structure I’ve created. It’s fun — but it’s also a learning experience, because you are rediscovering yourself every night.

And then there is also the responsibility of coming up with results. …You are exposed. And the people who really enjoy flamenco come to the show with the attitude that the performance is a shared adventure. They come saying: “Let’s see how Juan is tonight.”

So each night Improvisao is different, unrepeatable?

Absolutely. The structure of this show is the order of the palos [the different styles within flamenco] and even then, and depending how I feel, I would ask the people accompanying me to go this way or that.

What is the role of improvisation in the flamenco tradition?

To my mind, the origin of flamenco is improvisation. Flamenco did not start in an academy or in a school setting. Flamenco was born in home gatherings. I don’t remember when I started dancing. What I do remember from when I was a little boy is that while my mother was, say, cooking, and she had to go from the kitchen to the patio, and if she thought of something she would dance it. And any celebrations at home — be it a birthday or any good bit of news — it was all ole! and song and dance. That was not some sort of training, it was life.