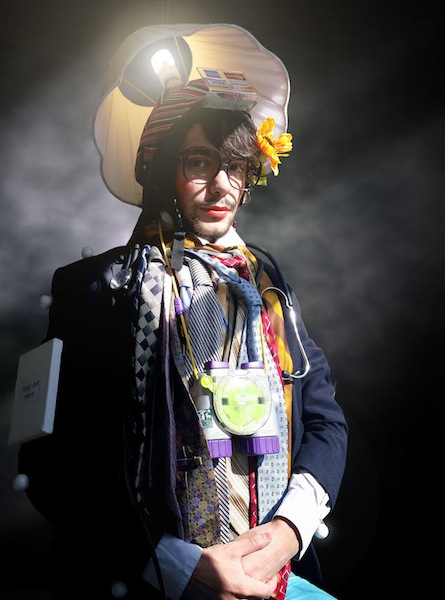 Has life ever felt like being trapped inside an iron maiden, spikes in every direction making relaxing out of the question and even breathing seem a risk? For Liz Ferrer and Charo Oquet, organizers of this year’s PerforMIA 2015 festival, In Between, the performances at this one night event are about being wedged into social spaces that, in curator Ferrer’s words, “have already been constructed for you.”

Catching up by phone with Ferrer, Oquet and Chicago performance artist Bow Ty, Artburst got the big picture behind the 16 noted performers coming to Miami this week from all over North America. Their common denominator is an art practice that challenges personal and social relationships with identity politics.

Both Oquet and Ferrer see the PerforMIA festival as engaged in a critique of Art Basel, and present In Between as an alternative to it. In sharp contrast to many of the events and exhibitions of the main art fair, the performance festival itself breaks that mold. It is free and anyone can come to the show. Their intent here is to forefront the “VIP space to the fourth power mentality” that has become a standard feature of the Art Basel aesthetic.

Both Oquet and Ferrer anticipate that this year’s performers will take the embodiment of critique as seriously as performer Kalan Sherrard did during last year’s festival. Sherrard was arrested for invading the collector’s lounge at the convention center and aggressively reading to the art collectors assembled there a how-to guide to collecting art.

As Ferrer explains, “We are challenging the art box aesthetic. Take, for instance, the performers Poncili Creacion, twins who take found foam rummaged from second hand sofas and morph it into all kinds of shapes including puppets and masks.” During the morphing performance the twins dialogue with one another as the foam shapes constantly shift. In the process they create performance art that is both thing-like and sculptural, and yet fluid, active and transitional.

In a similar vein, Chicago artist Bow Ty explained his work “is about restrictions and various rules that I create in different social situations and life practices.” In a previous piece, Ty memorized the names of the faculty and graduate students at the school where he was earning a Master’s degree. The space of his performance was his daily interactions with them. “I memorized more and more details about their lives and interests. I was motivated by the oppressive graduate school expectation that one is supposed to network constantly and in doing this I was exposing the expectations that framed that educational space.”

For Oquet, an artist herself and founder of Edge Zones, the non-profit that sponsors the festival, it is important that In Between happens concurrently with Art Basel, given the celebrity art fair’s emphasis on the art market and the art object as a commodity. “PerforMIA 2015 is not just about bringing in the paintings and having them filter the art experience,” she explains. “It is about bringing in the conversations and exchanging ideas, to share and have conversations with these provocative performers while they are here.”

Oquet added, “We don’t push the performers to have concrete ideas before they present, so that both audience and the performers themselves are surprised. The public should come ready to be surprised by an experience that they will not get from anywhere else.”

So, if the Art Basel crowds and price tags leave you feeling squeezed through some medieval machinery of torture, consider an unscripted evening with 16 performers who see art as more than a commodity and art negotiation, as a matter of freeing themselves from social constraints.