Down the Rabbit Hole, On The Fence 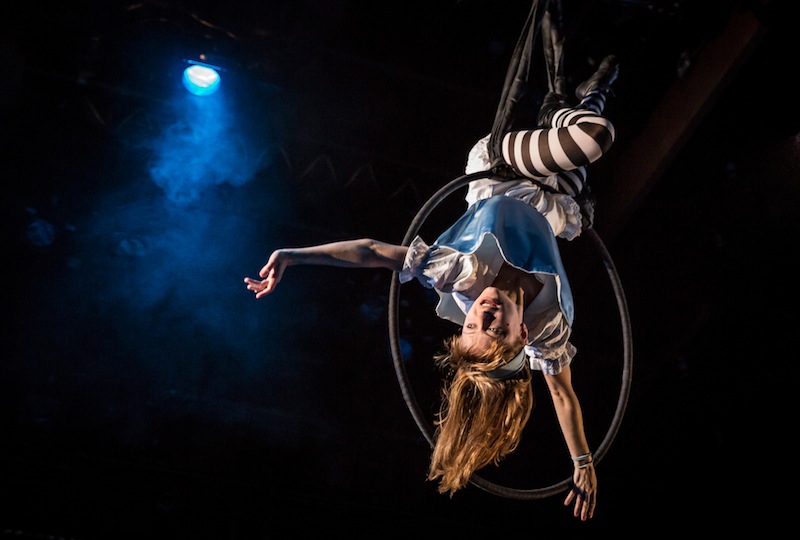 There are dual worlds in Lookingglass Alice, the Adrienne Arsht Center’s summer offering in partnership with Chicago’s Lookingglass Theatre Company.

It’s quite fitting indeed that this summer theatrical event (it’s not really a play, it’s more of an improvisationalistic-performance piece-acrobatic-circus inspired spectacle with some play elements tossed in) takes place in a manic world of opposites. This is one of those shows where audience opinion may be split (catch the intended pun when you see the show. Unlike many critics who gave away one of the most surprising elements of the evening, I will purposely resist a spoiler. Off with their heads! as the show’s Red Queen would say).

With this circus-themed retelling of Alice, you’ll be either enthralled or you’ll be sneaking the light on your iPhone to check the time to see how much longer the shenanigans will ensue. I was caught somewhere in the middle.

For Lookingglass, The Arsht Center has creatively imagined the world of the storybook. They’ve transformed the Ziff Opera House into a smaller theater, much like the performing arts center’s compact Carnival Studio Theater, where black-box type shows are usually performed. Lookingglass’s show could’ve easily been staged in Carnival Studio, but the inventiveness of the staging begins the fun.

The audience enters the back of the house, then walks to the stage area where they climb the stairs into either the Alice or the Lewis Carroll section, depending on ticket assignment. Both sections will have the same view. It’s the first time the Ziff’s stage has put an entire audience on stage.

Then the real show begins. The idea of descending down the rabbit hole with Alice is full of promise and possibility — danger lurks in a dream state in Charles Lutwidge Dodgson’s (a.k.a. Lewis Carroll’s) surreal story, which has been adapted umpteen times since its release in 1865. A 7 ½ year old Alice wants to be queen in this dream, so she’s challenged to a game of chess. In this incarnation, the duel is set by a ceiling-high tall Red Queen (Molly Brennan) in one of the most eye-popping spectacles of the show. (The costume by Maria Blumenfeld is arresting and the illusion plays well until stagehands wheel the Queen off stage like Two Men and a Truck transporting an overly large piece of furniture.)

As Alice is trying to win the game to claim her crown, she meets odd creatures on her way to the finish line.

Lookingglass Theater’s David Catlin’s adaptation of Alice’s Adventures in Wonderland was first produced by the company in 2005. It is, most definitely, original in its approach. While Catlin says some of the inspirations for the show’s acrobatic feats were born after he and fellow company members saw Cirque du Soleil, the Cirque grace is missing from Sylvia Hernandez-Distasi’s choreography. But it only slightly takes away from the gravity-defying tricks, especially the ones she’s assigned to Alice (Lindsay Noel Whiting). There are plenty of tricky acrobatics using ropes, metal rings, and even a spinning aerial that involves two large balls that will astound as well as entertain.

Noel Whiting, who started in the show as an understudy and took over as the lead in 2008, is a double threat talent as Alice; she can act as well as skillfully perform the physically challenging, high above the stage, aerialist routines. She even holds the full weight of a man on her shoulders. Spectacular.

Four other actors double in a number of roles including Brennan, Kevin Douglas as a nimble Mad Hatter, a vocal beatmaster as the White Rabbit, one of two hip-hop Tweedles, and a ladder hugging Humpty Dumpty. Adeoye as the slinking Cheshire Cat also gets to show off his muscular acrobatic skills during a game of musical chairs. Delightfully accessible as Mr. Carroll himself in the opening scenes and then a quirky delight as the unicycle riding White Knight, Samuel Taylor brings a spark to every role — even his high-pitched White Queen is a scene stealer. Eggplant anyone? Taylor has wonderful comic timing that makes every line delivery seem improvisational.

There are some distractions that serve to interrupt any illusion that’s built on stage: Catlin’s decision to call attention to the fact that we’re watching a play — a stage manager calls light cues into a microphone from high above the stage and stagehands move pieces and converse with Alice for a prop exchange is meaningless. Also, the choice to not mic the actors make dialogue sometimes inaudible and are in such a contrast to booming sound effects.

How about playing to every seat in the house? One of the most (I guess) hilarious and intriguing stunts in the play was an oversized picnic basket that tossed out people and chairs, but from my row in the Lewis section, I couldn’t see the gag since it was blocked by the front row.

And for the sake of mentioning it, why couldn’t audience members stay in their seats for a mere 90 minutes? Another illusion buster is the parade of regular folks walking back and forth and obscuring stage action since there is no obvious demarcation between the stage and the sidelines. Off with their heads.

The best should-you-go advice for Lookingglass Alice is much like deciding to indulge in the contents of a bottle marked Drink Me (as happens in the play). Why not? Go ahead, give it a try. Perhaps you’ll find this re-imagining of Carroll’s 150-year-old tale to be curiouser and curiouser.