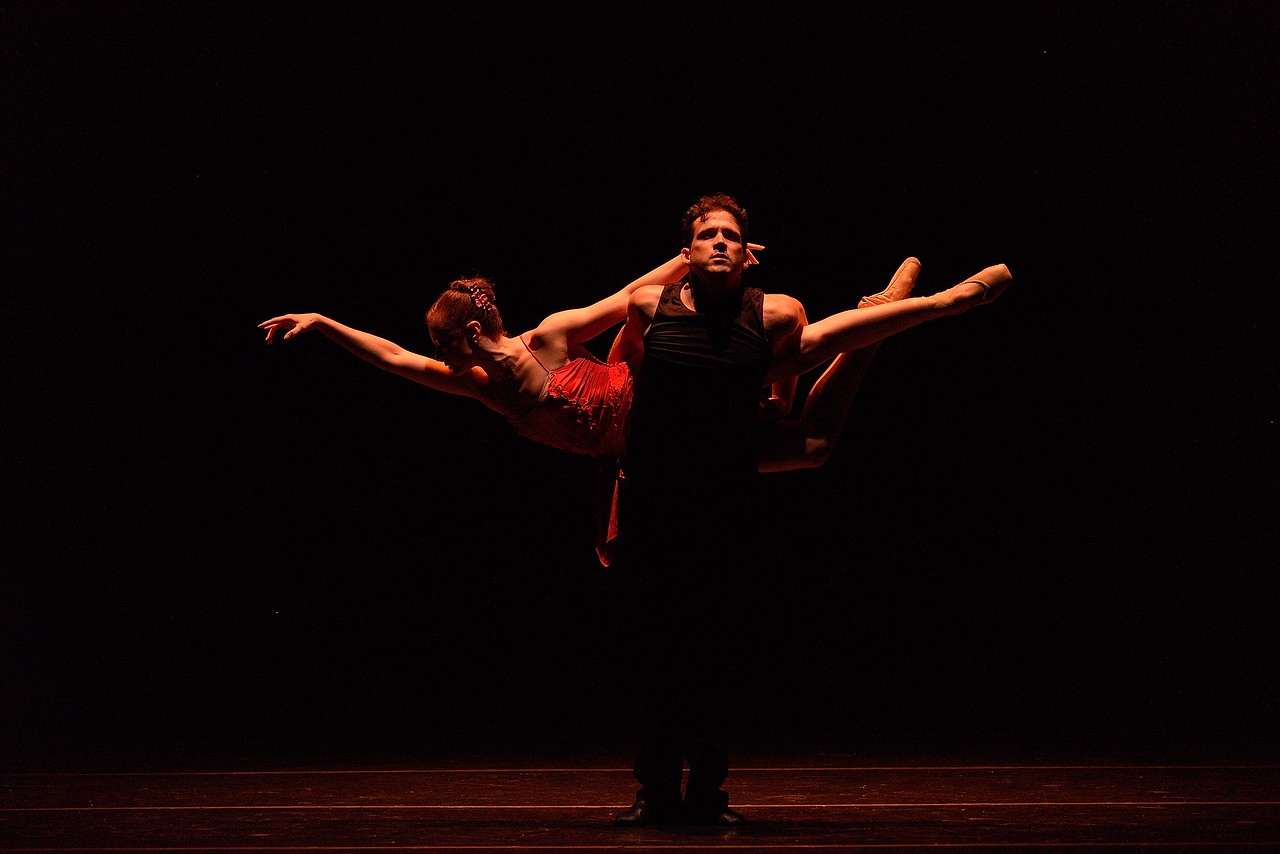 Dimensions Dance Theatre of Miami opened their 2018-2019 season with “Ballet: Bold and Beautiful”, performed November 17th and 18th at the South Miami Dade Cultural Arts Center.  The 3:00pm show on the 18th was well attended by a mixed age audience that responded enthusiastically to the young company’s versatility, obvious technical skills and appetite for risk.

The program kicked off with the company premiere of Gerald Arpino’s 1971 “Reflections” set to Tchaikovsky’s “Variations on a Rococo Theme for Violoncello and Orchestra”, women in pale pink shifts, men in pale blue tights.  Arpino chose a nuanced title for a piece that “reflects” elements of Russian and Balanchine classical technique interspersed with accents of modern and jazz and, in doing so, “reflects on” the place classical dance occupies among competing paradigms of movement.  A couple missteps detracted little from how well the technical requirements of “Reflections” fit with DDTM’s talents.

The three pas de deux that structure the piece were breathtaking. In the first, Claudia Lezcano exhibited intricate pointe work partnered by Kevin Hernandez who repeatedly floated her across the stage into deep arabesque penchées.

The well-honed technique of Mayrel Martinez was the centerpiece of the second, but the sequence also allowed a peek at dancer Natanael Leal, in the background much of last season but superlative on Sunday solidly anchoring Martinez through a succession of difficult lifts.

Gabriela Mesa and Fabian Morales were riveting in the final pas de deux.  Mesa presented a gorgeous calligraphy of arms, legs, wrists and fingers amplified by Morales’ physical power for whom it was effortless both to hold a standing Mesa at his shoulder and to hover her above the floor while she touched down en pointe.

Next up was the company premiere of “Ardor” by former English National Ballet choreographer and soloist, Jenna Lee.  Danced by DDTM artistic directors, Carlos Guerra and Jennifer Kronenberg, the piece was set to the Max Richter re-composition of “Summer” from Vivaldi’s “Four Seasons”.  Structured as a classic chase marked by tango-like confrontations, Guerra in black hunted Kronenberg in startling red through whiplash direction changes, floated splits and lifts that swung her both overhead and over his back.

The world premiere of “If” followed, a gem choreographed by DDTM dancer Yanis Eric Pikieris who danced the male role opposite Claudia Lezcano. Chords in the piano opened the movement with Lezcano alone in a yellow body suit against a blue backdrop, leg stretched forward, leaning back, both arms folded onto her chest. With the oboe solo Pikieris began to mirror her, shadowing her skillfully through pirouettes or gently turning out Lezcano’s leg stretched in arabesque before tucking her into a lift.

Venezuelan choreographer Vicente Nebrada’s, “La Luna y Los Hijos que Tenía” (“The Moon and the Children that She Had”) closed the program accompanied by the Venezuelan Percussion Ensemble performing on stage.  Special thanks go to choreographers Zane Wilson and Yanis Pikieris (the father of Yanis Eric) who rescued this extraordinary work from oblivion.

“La Luna” presents human beings in the state of nature.  In sequence after sequence Nebrada explores the primitive as a Dionysian drive toward excess and the origin of dance in all of its forms.

Sequences frequently showcased the male dancers.  In “Yopo” (a kind of hallucinogen) Stephen Fons, Natanael Leal, Yanis Eric Pikieris, and Gilberto Rodriguez assembled a pulsing human pyramid at the center while the drummers set the hall thundering. Kevin Hernandez circled the group, leaping repeatedly in corsair saute de basque, legs bent in at the knee whirling like blades.  The audience burst into applause.

Chloe Freytag and Natanael Leal were show stealers.   Leal exploded onto the stage, pumping outward through the chest like a wind-whipped sail.  With Pikieris the two freely wove elements of African and classical dance until, as the flute screeched, Freytag joined them, waves of rhythm cascading through her sternum.   The percussionists began to chant and she took the center, arm snapping forward like a snake strike, imperiously gesturing to Leal and Pikieris to follow her lead.

From the depths of the jungle Nebrada granted a glimpse of the town. During the sequence “Joropo” – a Venezuelan folkloric dance – Trisha Carter, Diana Figueroa, Mayrel Martinez and Selah Jane Oliver teased and joked to the flute and maracas with flirtatious shoulder rolls, light springs in place and skips across the stage.  Miming conversations with comedic touch, they joined hands and positioned their legs in complicated group chains or laid down signature sequences as when Martinez pirouetted rapidly along the diagonal and ended with a final blurring pivot on one foot alone.

“La Luna” ended with the audience on their feet. The output of these performers on Sunday showed that DDTM, at just sixteen dancers, punches far above its size.