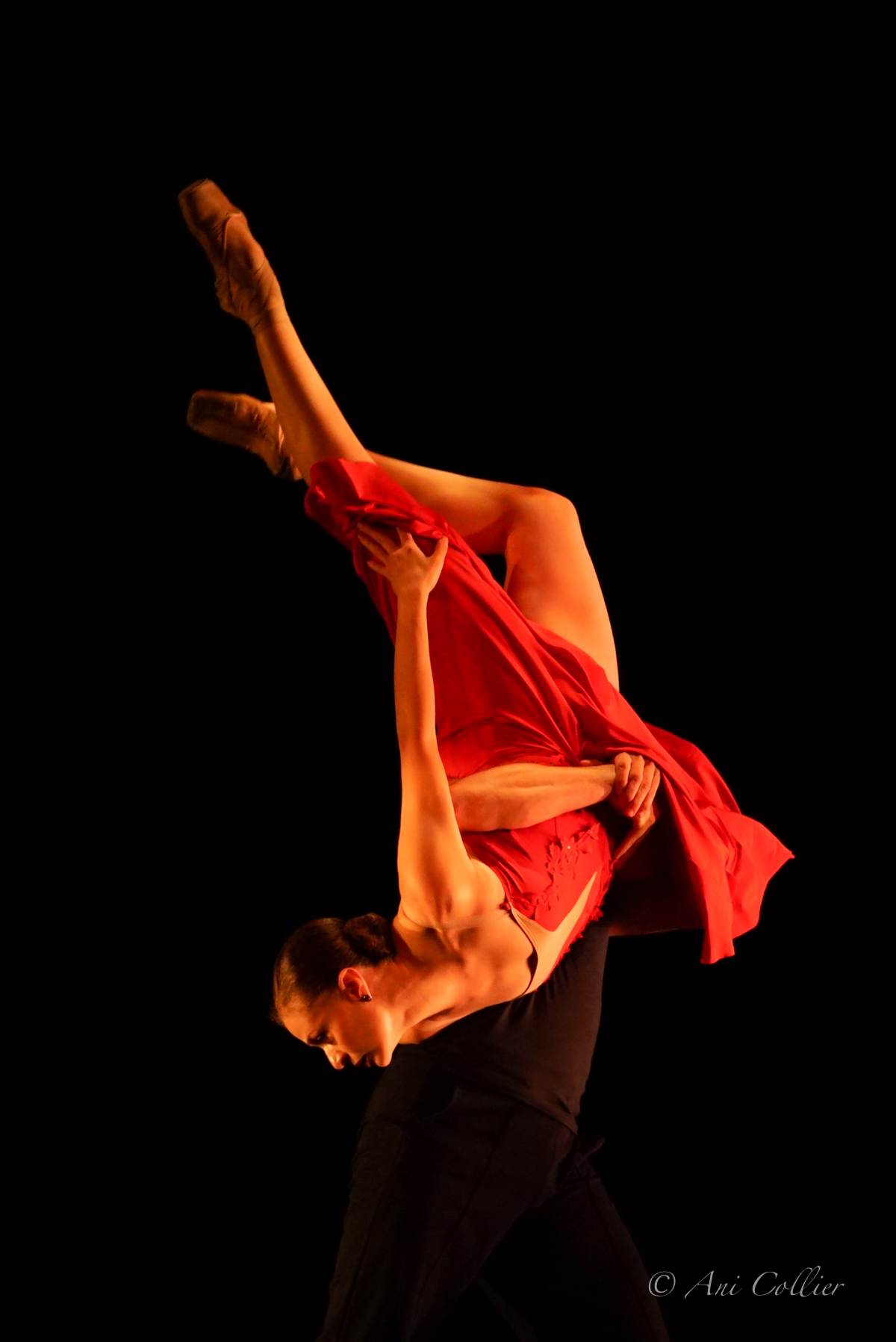 Walking into the Mencia-Pikieris studios during Dimensions Dance Theatre of Miami’s Wednesday rehearsal of Gerald Arpino’s “Reflections” felt like plugging in just when the battery hits 1%.  The atmosphere oozed energy as dancer Kevin Hernandez lifted a petite and wiry Claudia Lezcano and swept her across the floor, setting her down en pointe, her leg snapping back in arabesque.    They played a quick game of catch and release to Tchaikovsky’s “Variations on a Rococo Theme for Violoncello and Orchestra” until Lezcano made a run for it, chopping across the floor in tight chainé pivots.

As Hernandez caught and held her waist, she snapped to face him. Choreographer Cameron Basden coached, “Ok, good, but now give me a ‘Te adoro’”, and the sequence ended with Lezcano’s head on Hernandez’s heart. The DDTM dancers watching from the sides burst into applause.

After the rehearsal, Hernandez admitted to feeling challenged by Arpino’s choreography.  “Success here depends a lot on feeling and hearing the music in the same way”, observed Hernandez then added, “if one of us misses our cue it spoils the timing of the piece”.

Lezcano also found the timing of “Reflections” a challenge: “This is a really technical piece and if one of us is ahead it can feel like we are boxing with one another”. She must have read the surprise in my face because she added, “I know it looks easy and fluid but if our timing is not just right it can feel like I might hit the floor – in a bad way”.

For choreographer, Cameron Basden, who sits on the Board of Directors for the Gerald Arpino Foundation and herself danced “Reflections” with the Joffrey Ballet when it was revised in 1985, this piece plays to all of DDTM’s strengths: “These dancers have a lot of technical prowess and they’ve been honing Arpino movement quality, becoming more comfortable with rolling through the hip and upper body and what Arpino called a torso-infused back.  This choreography plays to their technical strengths.  They’re gorgeous in it.”

Next up was a neglected choreographic gem by Venezuelan choreographer, Vicente Nebrada – “La Luna y los Hijos que tenía” (The moon and the children that she had).

President of the Vicente Nebrada Foundation, Zane Wilson, and South Florida choreographer and former principal dancer with Nebrada, Yanis Pikeiris watched as dancer Chloe Freytag articulated the phrasing of the opening flute solo through her chest and abdomen.   She crouched then pinned back her arms, wing-like, before throwing herself across the floor in a circle of grand jetés.  She then paused to lilt with the melody through her chest and arms until the percussion heated up.  She finished the sequence furrowing across the room in chainé pivots, her hands forming opposing fists.

Wilson and Pikieris were so intently absorbed in the sequence they sometimes accented Freytag’s movements with a shoulder roll or half pivot of their own. Pikieris admitted that he and Wilson were on a mission to revive Nebrada’s works. As he explained, “Nebrada’s pieces were dead, and so ten years ago Zane and I started reviving his works for whatever company would perform them.  Even “La Luna y los Hijos”, performed first in 1975, nearly vanished until someone discovered an old video of it that helped us to piece it back together”.

A startling testimony to the fragility of art given that his son, DDTM dancer Yanis Eric Pikeiris, will also be premiering his choreography, “If”, during DDTM’s November program.

When asked to comment on the palpable focus and uptick in energy exuded by the company Freytag later confessed, “When you know everyone in the room is rooting for you, you internalize that – and we do that for one another.  Because of that everyone is progressing at light speed.” Freytag also attributed the change to the enthusiastic response the company received at New York’s Joyce Theater and at the Jacob’s Pillow dance festival this past June.

“We all come from this misfit background,” Freytag added.  “Everyone in this company has either quit a dream job or been fired.  We’ve all been told we can’t do it, so to end up with two standing ovations back to back at the Joyce Theater – an experience like that says, yes, you can really do this – and more.”

For more information and to reserve tickets: https://smdcac.org/events/dimensions-dance-theatre-miami-ballet-bold-and-beautiful