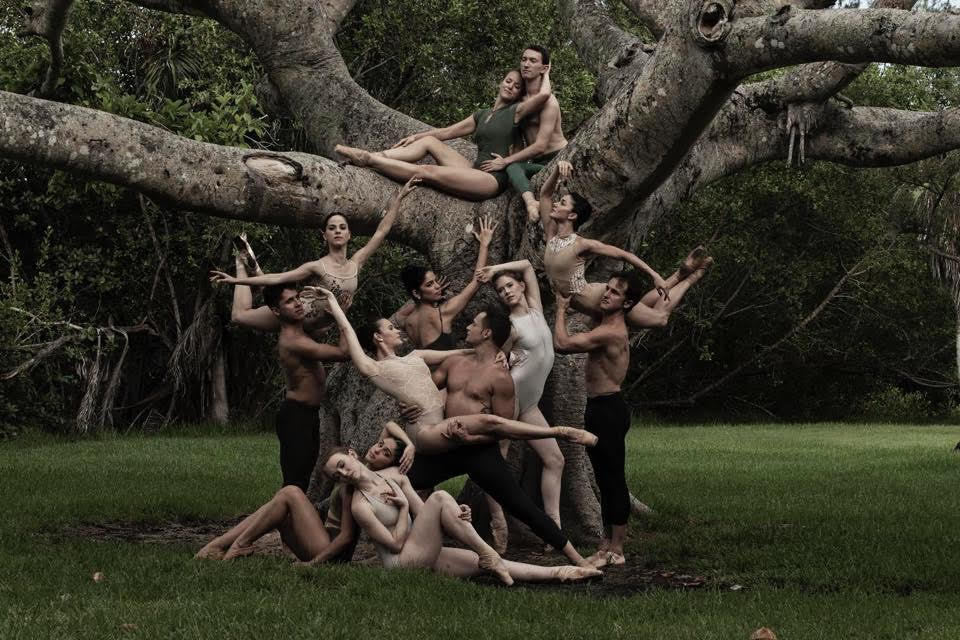 Arms poker straight, dancers Chloe Freytag and Selah Oliver pivot and chop the air then spring to the corners of the room.

Freytag powers two jetés back to the center then high-steps, lunges to both sides, and slams full-body onto the floor. Oliver slowly paces behind her, steps samurai-like and meditative, one hand over her heart, the other at her hip.

His eyes fixed on the dancers, Yanis Pikieris, who is co-founder and co-director of the Mencia-Pikieris School of Dance in Miami, leans over and explains that both will wear pleated full-length robes and carry Japanese fans for the performance. He adds, as Oliver stabs the air, “those fans will also act like daggers.”

Dancers crowd into the room to rehearse Atlanta-based choreographer Tara Lee’s “Under the Olive Tree,” which the young company will perform for the first time since its November 2016 opener. As they set the pose, the dancers’ bodies sculpt a great tree at the center. Some form the arches while others, held shoulder height, complete the canopy with outstretched arms and legs.

“We wanted to present a program that avoided elaborate costuming, stories or scenic elements, and just to concentrate on beautiful people in beautiful choreographies,” says Jennifer Kronenberg, the former Miami City Ballet principal dancer who is DDTM artistic co-director with dancer-husband Carlos Guerra.

Vivaldi’s “Four Seasons” opens with a swell of violins as the dancers sweep their arms up and out to the sides. For a moment, they tremble at the center. Then like a dandelion seed tugged apart by the wind, they scatter. 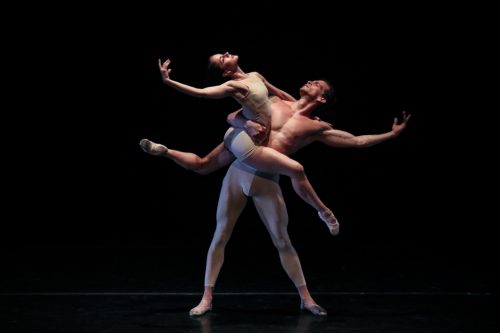 Lee saturates “Olive Tree” with classical references. As Freytag (who dances the part of Aphrodite) explained, “Olive Tree” is loaded “with lots of emotional difficulty” since each pas de deux spotlights an encounter between two Greek gods with loaded histories. It is one of two classically themed works on DDTM’s Saturday program; “Apollo & Daphne” by Ben Needham-Wood of Smuin Ballet is the other.

Ryan Nicolas, who is new to DDTM this year, solos as Ares, the Greek god of war. A former dancer with the San José Dance Theatre and Ballet Memphis, he snaps his left leg back in arabesque then lunges forward with the entrance of the winds. His solo concludes, and his colleagues erupt in appreciative applause.

Asked about his experience with the company, Nicolas emphasizes the warm welcome he received during his South Florida transition.

“DDTM is unique,” he says. “They have a lot of finesse to offer, and it has, of course, been an incredible experience working with Edward Villella [the storied principal New York City Ballet dancer and former artistic director of Miami City Ballet who frequently consults with the company].”

Next up are Natanael Leal in the role of Dionysus (god of the theater) and Mayrel Martinez as a composite of Hera (queen of the gods) and Anankē (goddess of fate). They are among the company’s visually heart-stopping couples. Leal catches her at the waist then floats her counter-clockwise. From a backbend, Martinez throws herself into a pivot then swoons, falling leadenly backward. Leal catches her, his palm on the back of her neck, and folds her to the floor.

DDTM has built a reputation for having great dancers and spotlighting emerging choreographic talent. Audiences were given a teaser of “Genus” — the newest work by Yanis Eric Pikieris (son of Yanis Pikieris) – last spring at the South Miami-Dade Cultural Arts Center’s lab theater. The show on Nov. 16 presents the complete ballet. 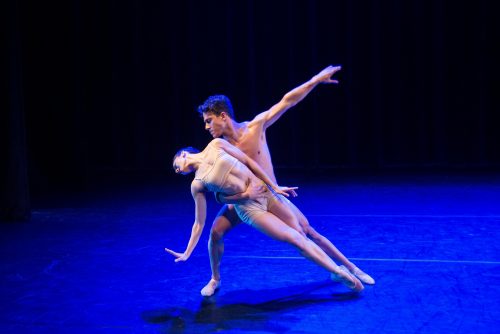 The choreography takes its name from Talbot & Deru’s album “Genus” (think electronic soundscapes layered around solo strings and chorus). Philip Glass-like repetitions fire up in the violin, and Yaima Mendez, Calista Olson, Meisy Laffitte, Miranda Montes de Oca, Freytag and Oliver spring open, pivot on demi-pointe and freeze, legs to the side, backs to the audience.

Olson, Laffitte and Montes de Oca are new to the company, but already their synergy with the DDTM veterans is impressive. It doesn’t hurt that Pikieris has a clear knack for showcasing their talents.

Maikel Hernandez, Kevin Hernandez, Stephan Fons and Leal jump and lunge or crouch powerfully in plié before folding over and turning heavily. To the side, Trisha Carter and Oliver shape intricate gestures with shoulders, wrists and fingers, their movements so precise they seem to speak with their hands.

Pikieris stops the group and makes adjustments. Though the choreography is abstract, Pikieris points to an evolutionary sub-text in the ballet, framed as an encounter between two very different species. For those who remember last November’s DDTM gem – “If” – another work created and danced by the young choreographer – Pikieris has a genius for framing his innovative sequences within a minimalist aesthetic that feature bold choices of costuming, lighting and staging.

When: 8 p.m. Nov. 16 (with a pre-show conversation set for 6:30 p.m. in the Dance Rehearsal Studio, moderated by journalist Jordan Levin with Jennifer Kronenberg, Carlos Guerra and guest speaker Professor Han Tran, a senior lecturer in the Classics Department at the University of Miami)