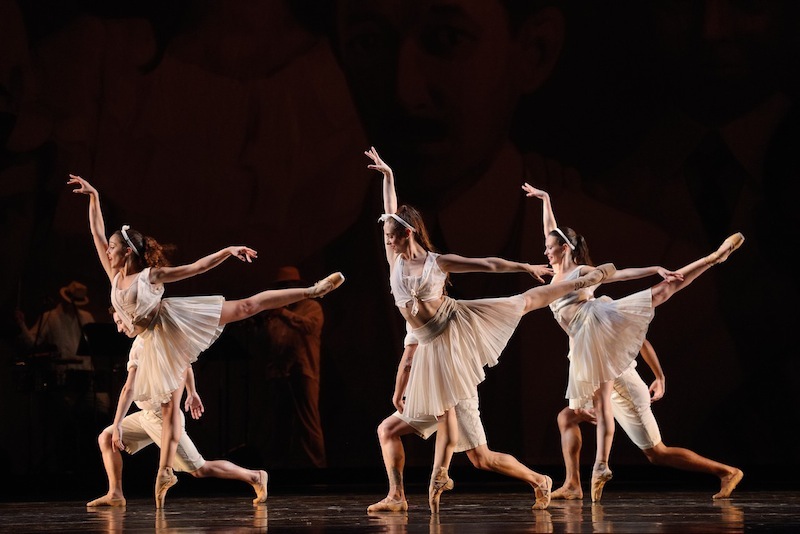 Blessed by good parentage and nurturing support, a hale and hearty ballet company has just been born in South Florida. Under the direction of Jennifer Carlynn Kronenberg and Carlos Miguel Guerra, much-admired former Miami City Ballet principals, aided by a dedicated production team, Dimensions Dance Theatre came into our midst at Miami-Dade County Auditorium in late November with the program “Between Havana and Heaven.”

Ahead lies the hard work of bringing up baby: expanding the repertory to establish a clearer artistic identity, polishing up performances to better serve the dances, and—perhaps most daunting—building a solid financial base. Still, this first show held promise and established a worthy mission to include women choreographers and, whenever possible, live music.

Welcome, then, Under the Olive Tree, a multi-segmented work by Tara Lee, an Atlanta Ballet member who choreographed this (to Vivaldi and Max Richter) for New Orleans Ballet Theatre last summer. Drawing from Greek mythology, the ballet traces a passage from static divinity to vigorous human striving as gods forsake their majesty, stamped on the olive tree, to enter the world’s fray. But it was just as well to withdraw from that reading and merely enjoy the excitement of emotion-laden encounters in solo, duet, and ensemble work.

True, after a looming formation of entwined dancers split up, the curve of their arms and raised hands with twig-stiff fingers illustrated the transformation of arboreal rigidity into pulsing flesh. Yet the ensuing push and pull of movement, sweeping across the stage, served the senses more than the concept. Dancers brushed by each other, joined up, and opened their bodies to the light; the eight women were slinkier than the three men, who—bare-chested and blocky-muscled—stayed closer to their woody origins, each one quite a looker nonetheless.

Who wouldn’t want to see Katia Carranza dance here again? Elegant of line and declarative in technique, the former MCB principal can bring an engaging directness to her moves—evidenced even in the hoary medium of The Talisman Pas de Deux, extracted from the 19th-century Russian repertoire, which she laudably polished. Her partner, Maikel Hernández, though somewhat odd in carriage, still showed off his obligatory turns and leaps with enough force.

Desire was in the air to see Kronenberg and Guerra do what they do best: exult in a pas de deux.And they fulfilled expectations for that feast of thrust and trust, though in the relatively unassuming mode of Yanis Pikieris’ Ante El Escorial.To a solemn piano composition by Ernesto Lecuona (played by Marcel Guerra on stage), this didn’t portray, as so many duets, a mere romantic dalliance, but—aloft on the resonance of the music—more of a vital alliance. Fitting for this married couple at the cusp of an artistic adventure.

Juanita y Alicia is Septime Webre’s memory-stitched valentine to his Cuban heritage, at once aching with intimacy and arching toward cultural lore; overall lively and not without wit. The musical selections, played with fervor on stage by Alain García and The Latin Power, are familiar island classics, most recently made popular for wider audiences by Buena Vista Social Club; a passage of pure percussion, however, unearthed deeper African roots to nourish the hot-blooded fusion of Masiel Alonso and Ignacio Galíndez.

Most interesting here was the use of popular rhythms and crooning vocals for high-gear classicism in the dancing, Cuban accents used as condiment. The scenes, arising from the choreographer’s family history, kept close to the commonplace: white-clad youngsters in childhood games, endearing flirtations on festive occasions. But when a shirtless carnival figure (Todd Fox) came on the scene, a bolder sensuality flared. Chloe Freytag (another MCB alumna) met this wholeheartedly in a duet with Fox in the bolero Dos Gardenias. Then the cast got down to party in El Cuarto de Tula, a joy the audience readily embraced.

Dimensions debuted during an especially busy dance week. Among the events, Miami City Ballet’s Open Barre, a company-studio series, showed excerpts from Balanchine’s Gershwinsuite, Who Cares?,with reminiscences and on-the-spot coaching from Patricia McBride, a thoughtful advocate of an exquisite legacy. At Miami Light Project, Pat Graney’s Girl Gods illuminated women’s social history, packing critique and tribute in arresting vignettes. And, most thrilling, Britain’s Michael Clark Company concluded its residency at YoungArts by presenting three works—silken or steely but always shimmering—at extreme close-up and duplicated in the long mirrors of the Jewel Box space; to great effect, the music ranged from David Bowie to Eric Satie, leading to Patti Smith’s raw-throated outpouring of The Land of a Thousand Dances. If Dimensions Dance Theatre keeps adding to the wealth of movement celebrated in that song, our corner of geography will be a happier place indeed.