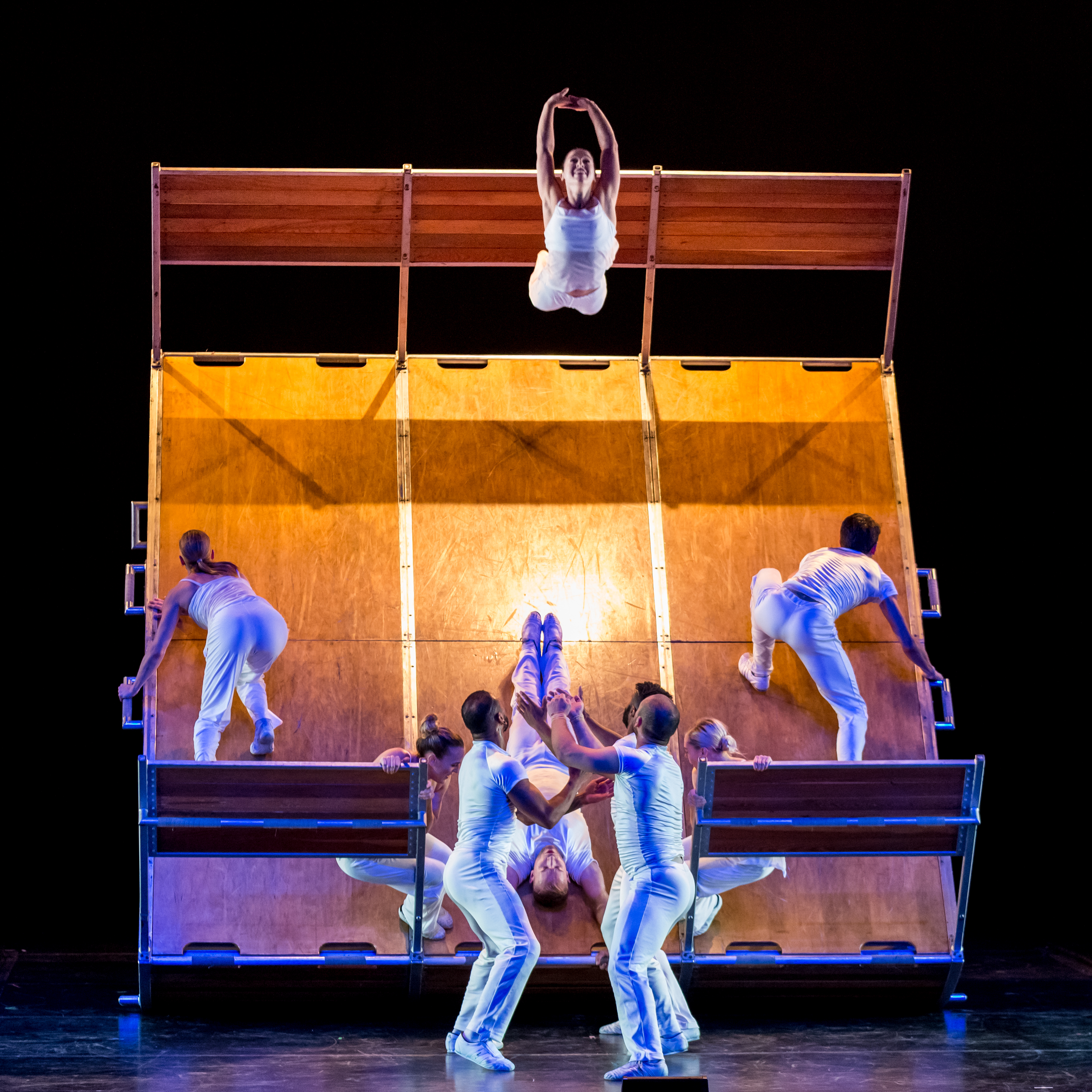 The Los Angeles based dance company, Diavolo, had its Miami debut at the Arsht Center, Friday October 12th. The hall was packed when founder and artistic director, Jacques Heim, addressed the audience with a quick survey that found most would be viewing the company for the first time. He then explained that the evening’s performances would explore how structures in the environment affect people physically, socially and emotionally.

Had Diavolo fulfilled that objective the evening would have been a success. Instead, the program’s first part presented a confused mash-up of themes and props interspersed with spectacular acrobatic sequences while the program’s more unified second half presented genuinely lovely and visually lyrical passages that grew stale through repetition.

The program opened with the company’s 2018 work, “Voyage”, and recordings of the Apollo mission that predictably closed with Neil Armstrong’s statement, “that’s one small step for man, one giant leap for mankind.” A large, white semi-sphere perforated with holes and a door were rolled onto the stage. An athletic Kelsey Long, in tight dark purple pants and white top, stretched out in front of the door then climbed its frame as a narrative voice over wondered what earth would look like from outer space.

The door opened and other dancers spilled onto stage. Together with Long they maneuvered the open doorway by passing through it, climbing the frame, rolling it from one part of the stage to the other as a heavy rock beat set the hall vibrating. Then the men rolled forward a long transparent tube containing performer Aubrey Lawrence. She slid out and Long crawled in then began to climb its length as the men, in crushed velvet wraps and mustard halter tops, lifted the tube to vertical.

As the narrator’s voice over peppered the audience with pop psychology, a dark wall pushed to the front of the stage then suddenly sprouted arms. A rhythm of synthesizer chords and pulsating bass set up a club atmosphere as the company pulled the cube apart into large triangular prisms. While the men ran up the sides and leapt from the edges, four of the women lunged and pirouetted from side to side in one of the night’s few dance sequences.

This sets the basic pattern of “Voyage,” which involved hazy transitions between vignettes where acrobatic sequences explored the geometries of different props to the beat of loud techno-music, the whole loosely pasted together by the theme of outer space and a confusing love story between Long and a Klingon looking Simon Greenberg.

One memorable sequence featured Lawrence lit from the front forming gorgeous sculptural shadows on the lowered scrim as she climbed among the metal bars of a circle segment. Lawrence’s segment would be gradually fitted to other segments to form a whole circle that was then rotated across the stage, swallowing up and throwing off dancers. In the end, only the admirable athleticism of the performers saves “Voyage.” Why the piece is titled “Voyage” and not “Trajectoire”, or why one vignette comes before another, or why all the male dancers at the end look all vaguely like Kirk clones from the ’66 Star Trek – these are just not questions that Diavolo pursues.

When he addressed the audience at the start of the night Heim had recommended the crowd have a couple drinks during intermission to prepare for “Trajectoire.” Puzzling advice since the evening’s second piece didn’t need that kind of help. One of the company’s signature works, “Trajectoire” uses a single prop – a huge vessel-like platform – and this focus unified the piece. Kettle drums laid down the beat as the performers rocked the vast platform, generating sequences that mimicked a boat at sea. At one point three men stood on the platform as the remainder of the company, all in white, undulated and lunged in front of it. The effect was that of a ship at high sea among white-topped waves.

The evening’s most impressive acrobatics occurred during “Trajectoire” with the performers playing daredevil, rolling right up against the hull and then rolling away just in time as it tumbled forward. Forced to a right angle, the platform launched performers across the stage in impressive arcs and into the arms of waiting company members.

The audience ended the evening on their feet and, of the two works certainly “Trajectoire” merited their appreciation.