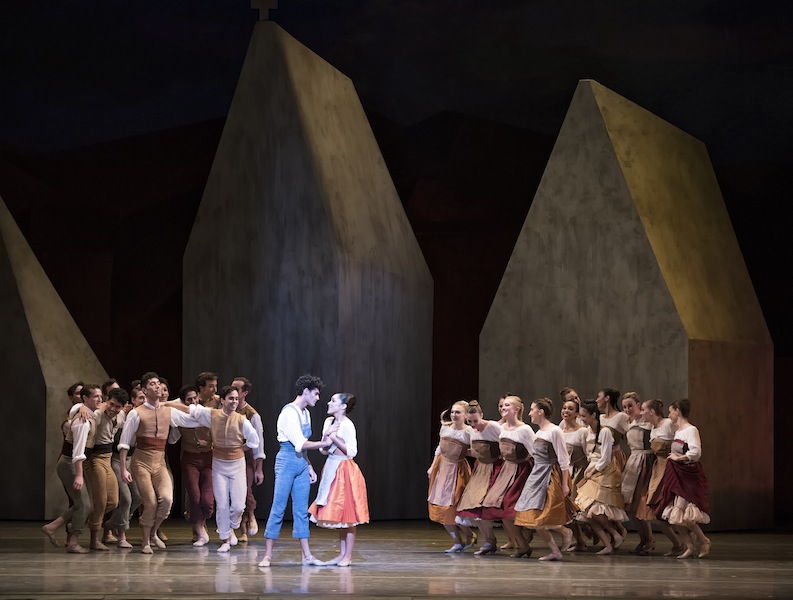 New life for a legacy ballet—a veritable choreographer-magnet—created a great buzz about Miami City Ballet’s third program this season. But at the Arsht Center for the Performing Arts, it was the accompanying pieces surrounding The Fairy’s Kiss that held the most honey.

As one of Balanchine’s ballerina feasts, Walpurgisnacht Ballet set the bar high for bounding choreography. While using music from Charles Gounod’s Faust, the work revealed, in its sunny science, a pact with Apollo and not the devil—though the closing part paid homage to Bacchus in an unbridled frolic.

Lustrous but demanding moves, pretty but unpretentious costumes, and simply a bright stage: all this gave rise to the pleasure of prized fundamentals. And, of course, there was that corps of 16 females in spun-sugar tulle—32 arms and 32 legs for rollicking locomotion and imposing architecture, further bolstered by demi-soloists. Nathalia Arja rejoiced upfront in whizz-by propulsion and balances with six-o’clock extensions. Her dancing was bracingly open and generous.

In an extended duet with Jovani Furlan, solo variations wittily interspersed, Lauren Fadeley proved to be a robust interpreter. No need for gilded phrasing, each shape spoke straightforwardly of strength and intelligence. Her partnership with Furlan—his princely stance a solid personal development—showed exciting promise.

Christopher Wheeldon’s Polyphonia made a big splash in its 2001 premiere and for good reason. The segmented work to piano pieces by György Ligeti—fomenting sometimes otherworldly, sometimes surprisingly sociable dancing—engaged the senses and excited the mind. The opening and closing four-couple ensembles, with mostly duets in between, explored rhythms and melodic moods embraced by Mark Stanley’s velvety lighting. And, with immediacy and deftness, MCB dancers endowed this with a binding commitment as Francisco Rennó cast a spell at the piano.

Prominently, Tricia Albertson, and Reyneris Reyes turned their union into an evolving organism, which—here a suspension, there an entwinement—drew us into an alternative biosphere. Also providing striking anatomical perspectives, other pairings were as meticulously measured but became more expansive, as was the case of Furlan and Ashley Knox and later Kleber Rebello and Jennifer Lauren. None looked more hauntingly poetic than Renato Penteado and Emily Bromberg, however, in shared exploration. In her eventual solo to pattering notes—with bourrées as smooth as streaming water—she went through linear progressions as if on a transformative journey.

Whoever lamented the end of football season after the Superbowl might have found interest in the opening section of Alexei Ratmansky’s The Fairy’s Kiss. Here a newly orphaned baby (mercifully a doll) got tossed around by a team of eerie creatures (think Snowflakes from The Nutcracker who drifted to the Dark Side) as if carrying out an unsanctioned game plan. Talk about tough love. This introduced a disconcerting tone: was it sinister humor or flashy horror? Either way, nice to have Simone Messmer quarterbacking as the fairy queen, gleefully reckless yet unflagging in her mission to mark the infant with enchantment.

A curious agent of fate, Messmer really had to take up three roles in one: the regal fairy—most exclamatory in haughty balletic feats—and also her avatars–a palm-reading gypsy, and an ersatz bride. Each demanded of the ballerina pronounced modes of characterization—earthy huckster, say, or airy seductress—which she grandly delivered. These apparitions intruded upon the boy’s life, with prophecy and subterfuge, diverting him from a mundane path toward his apotheosis as an artist. Sure as stamping a visa, the fairy kissed him to initiate travel to an extraordinary realm.

Jeanette Delgado, the object of Cerdeiro’s desire, added rays of sunshine to her dancing in a village feast and nuptial preparations—all the more to contrast to with the dejection she wrapped herself in after her sweetheart turned away.

Rustic fun and wedding ritual, cheerful yokels and bewitching beings— many elements in this work provided a digest of famous story ballets. Down to some gestures and passages, Ratmansky honored that heritage—not so different from Stravinsky’s own resuscitation of Tchaikovsky through references in this score.

And it was in that tribute to creative instrument that The Fairy’s Kiss gained transcendence. The epilog became a rousingly beautiful portrait of the contemplative artist. First lying down toward the audience—as if enthralled by his future in our appreciative eyes—and then taking in the action from different points, Cerdeiro surrendered to his calling as a full cast of dancers joined him. The gauzy drape of their costumes revealed humanity in the flesh, but a sublime purpose guided their cumulative configurations. In the end they lifted Cerdeiro—his art, so to say, elevating him—to put him in full view. The fairy had claimed the boy, but now the artist through his creations belonged to us.