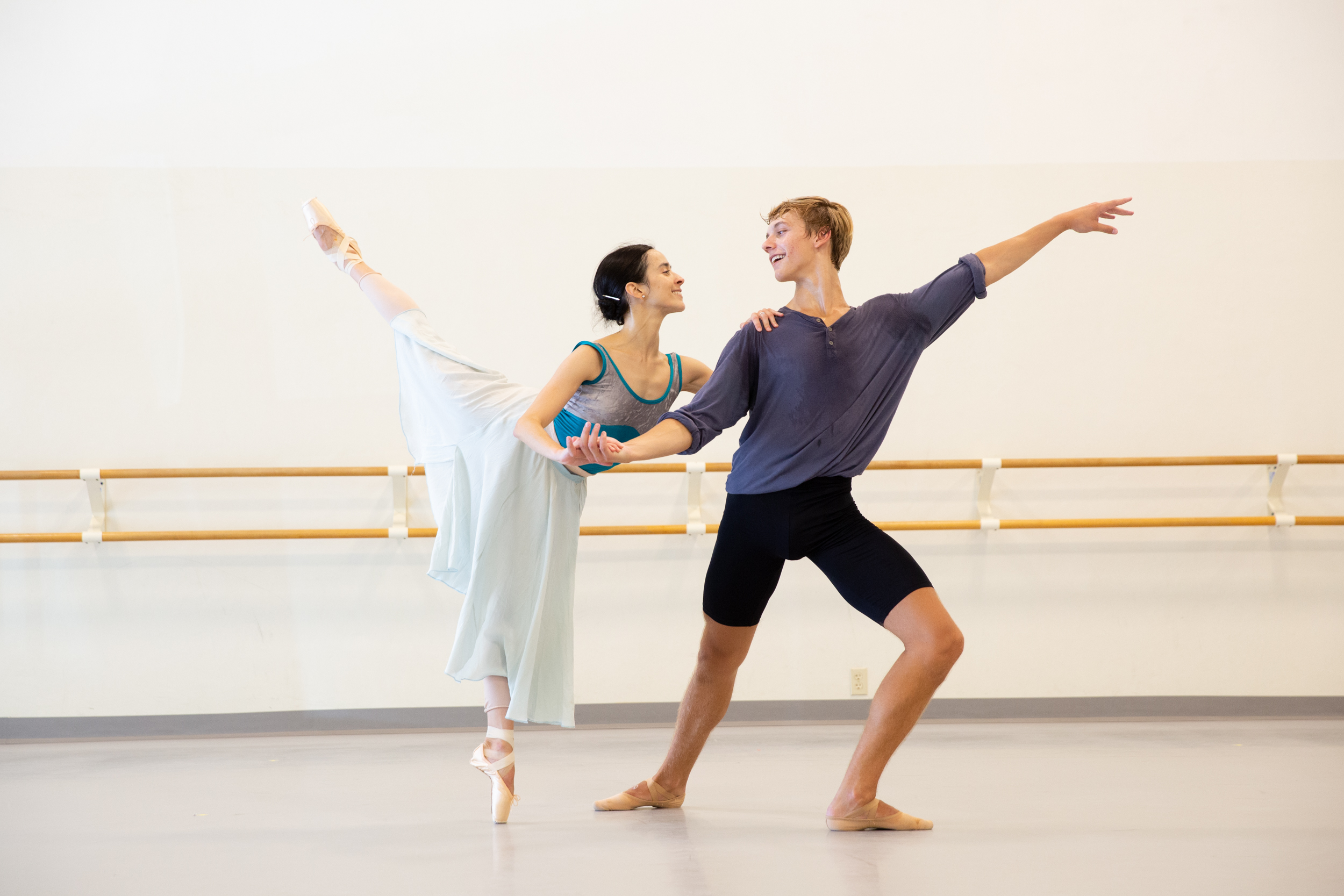 With their cloud-nine highs and rock-bottom lows, who or what can rein in the passions of teenagers in love? The question that’s put fizz in pop songs and shudders in drama reverberates throughout John Cranko’s “Romeo and Juliet,” a full-evening ballet with a Sergei Prokofiev score. Beginning its run at Miami’s Adrienne Arsht Center on Friday, Oct. 21, Miami City Ballet will stage this take on Shakespeare’s tragedy about Verona’s star-crossed lovers with dance steps turning into poetry.

In addition to showing how a famed romantic story translates into a storied ballet—its music deftly spectacular—the season-opener from MCB brings a noteworthy casting choice: two corps de ballet dancers, hired just this year, debuting together with their new company in the title roles. Isadora Valero, a 31-year-old Venezuelan, and Brooks Landegger, a 20-year-old New York City-native, have arrived at this auspicious—and out-of-the ordinary—career juncture through different paths, but they share a steady, straight-ahead artistic focus. 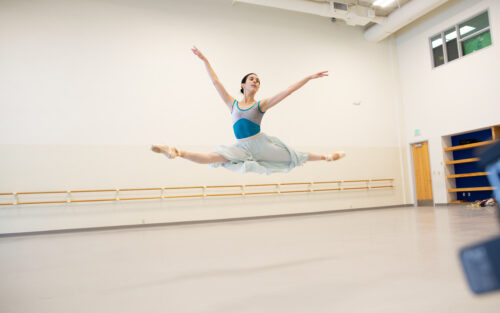 Isadora Valero is Juliet in Miami City Ballet’s season opener, “Romeo and Juliet,”  with a score by Sergei Prokofiev and choreography of John Cranko. (Photo courtesy of Alexander Izilaev)

“A great opportunity means a great responsibility,” says Valero, appreciative as is Landegger of the support MCB artistic director Lourdes Lopez has lent their endeavor. “I’ve got to give this two-hundred percent. Brooks and I have been discovering our parts together, and that’s a beautiful thing.”

(Principals Katia Carranza and Renan Cerderio, with long-established “Romeo and Juliet” credits, and another pair of corps members, Cameron Catazaro and Nina Fernandes, will alternate as the leads in the production.)

After weeks of rehearsals post-summer hiatus, the dancers are putting the final and demandingly fine touches on their interpretations under the watchful eye of a former Romeo and now artistic director of Czech National Ballet, Warsaw-born Filip Barankiewicz. As the répétiteur, it’s his mission to preserve the choreographer’s vision in the 1962 work for Germany’s Stuttgart Ballet, where South-African born dancer and choreographer Cranko was director until his untimely death in a 1973 plane crash. Both Valero and Landegger credit Barankiewicz’s curatorial skills, bolstered by MCB’s ballet masters, as the basis of an artistically transforming experience.

“I just find Cranko’s dramaturgy so amazing,” says the ballerina. “It gives his choreography such a natural feel, letting flesh-and-blood individuals shine through. And it tells me to always ask of my character, ‘What will you do now, and why?’ “  For her, this becomes a search for mental and situational stimuli, fuel and framework for the dance moves. 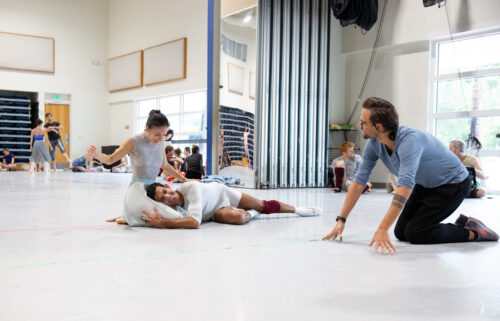 Landegger remains thankful for a deep dive he took into Shakespeare’s play in middle school under the guidance of a favorite English teacher.  And, for a through-line in the ballet, he relies on the notion that “the music is the dance,” part of a foundation built upon the guidance of Peter Stark (whose own mentor was Cuban-American ballet star Fernando Bujones) and School of American Ballet’s Jock Soto.

But Landegger emphasizes that in a ballet with so much bustle—the ballroom scene in the first act, the hubbub of the marketplace in the second—the most valuable lesson he’s drawn from recent coaching has been “to find the power of stillness.” Sure, the big moments are there for him to charge through, whether cavorting with his Montague cohorts or against Tybalt, his Capulet antagonist, and—strong arms at the ready—raising Juliet heavenward in her swoons. But, as Landegger has learned, double aerial turns and effusive lifts must leave room for quiet moments illuminated by the contained power of love.

To bring this popular ballet a personal voice also requires, according to Valero, “digging through the work’s layers.”  Luckily for her, this has involved incisive conversations with her mother, a specialist in adolescent psychology, about the teenage brain. 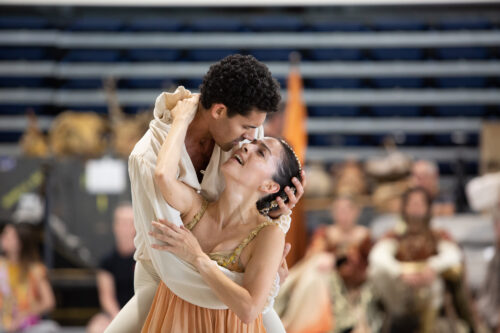 “Decision making is so different for teens—more intuitive, intense,” Valero points out. “This is related to hormones, of course—to discovering sexuality, with the personality still in development. It can be wonderful but also over-the-top. You see that in the ballet from the start.  As things get heavy, Juliet feels she can plunge through them. So tragedy develops. But this is a crescendo. There’s also incredible joy here. As an actress, a ballerina, I must play this one step at a time, as if with no knowledge of the ending, making sure the audience feels what Juliet does at every moment.” And rarely as in “Romeo and Juliet” have dopamine surges and perilous choices, based on the amygdala’s emotional hiccups, found such splendid portraiture.

Valero further connects this choreography to her own training and early career at Hamburg Ballet, directed by John Neumeier, once a Cranko protégé and himself a creator of notable narrative ballets. At her former company, Valero even got to perform in Cranko’s Onegin, inspired by Alexander Pushkin’s verses in another thwarted-love story. 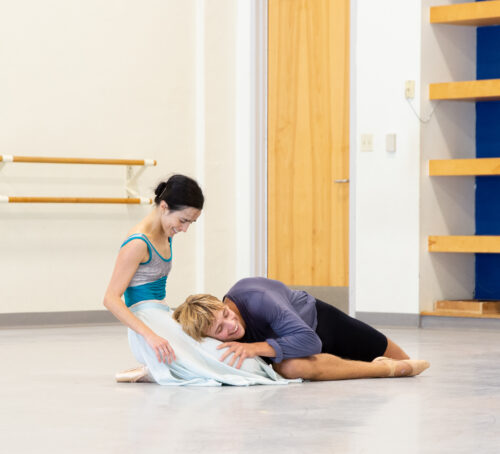 For his part, Landegger is no stranger to the stagecraft of storytelling, having toured in the lead of the musical “Billy Elliot” for over a year in his early teens. “That’s a story with great happiness but also great sadness,” he says, linking this to his current role. “And it’s all about the journey.”

Landegger’s experience in musical theater strengthens his bond with Andrei Chagas, a fellow corps member and live-wire friend Mercutio to his Romeo. Chagas, who danced different roles the previous two times MCB has put on this ballet, now brings a fresh perspective returning to the company after a period of dancing on Broadway and appearing as a Shark in Steven Spielberg’s film version of “West Side Story.”

“I am a different artist today,” says Chagas. “I’ve learned to make sure I know a character’s story inside out.”

Not diminishing the physical challenge of staying aloft in Mercutio’s whirlwind—including some tricky sword fighting—Chagas emphasizes, “You really have to hold the narrative, which calls for a lot of emotional stamina. There’s a showy, funny aspect to Mercutio, but he’s not a clown. He sees his friend struggling in love and wants to clear the way by challenging Tybalt’s hostility through teasing. He can’t foresee his own death.” There’s that teen brashness again, and as Valero also indicates, the step-by-step, multi-threaded weaving of the tragedy.

“This is all about a thoughtful partnership,” underscores Chagas, who through his musical-theater stint gained a deeper respect for how all involved in complicated productions—not unlike “Romeo and Juliet”—cultivate their craft. He says, “Every time I step into the studio, I try to figure out ways to better help not just me but the whole collective. Whoever we are, whatever we do, we’re better by working at this together.”