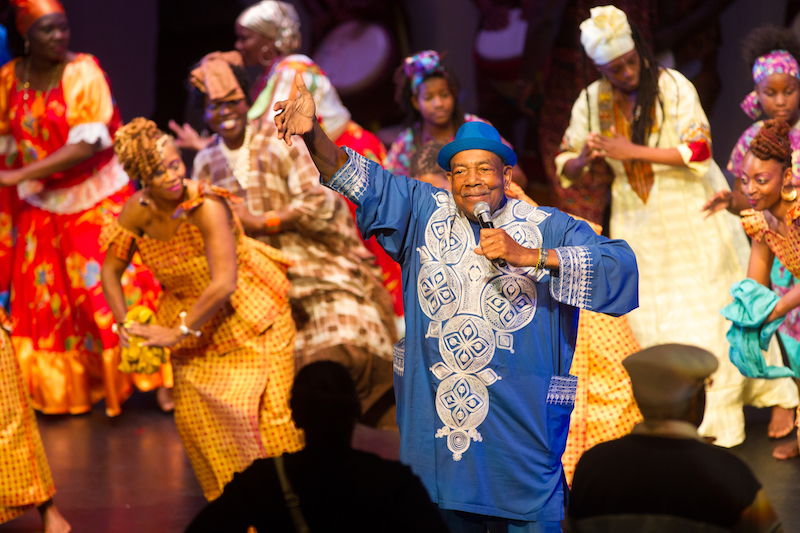 Miami-based organization Delou Africa has been the ambassador of African dance and drumming in South Florida for the last 30 years. It started as a performing company, and has since expanded into a small dance empire. Coming up this weekend, Delou will again present its annual DanceAfrica Miami, a three-day festival of African dance and drum classes and performances.

Eight years ago, the organization started a dance and drum festival to bring guest artists to Miami (at the time, it was known as the African Diaspora Drum and Dance Festival of Florida). But in 2011, African dance legend Chuck Davis, affectionately known by students of African dance as “Baba Chuck,” paid a visit. With his blessing, Delou was invited to operate yearly programming under the umbrella of Davis’s widely known DanceAfrica, a network of annual festivals held in major cities around the country.
Davis passed away in May, a death marked both by sorrow and celebration. Honoring his life, Delou’s 2017 DanceAfrica Miami festival is all about “Baba” chuck Davis’ legacy, with performances dedicated to him, plus a full program of classes presenting the African and diasporic dance traditions that he so passionately cultivated around the United States.
We spoke with Folayan Griffiths, vice president of Delou Africa, Inc. and the oldest daughter of Delou’s founder Njeri Plato. As a woman whose life has been shaped by the rhythms of African dance, Griffith crossed paths with Davis over the years and bore witness to his ever-growing circle of influence.
She filled us in on the details for this year’s festival and shared some of her experiences with Davis.
How long have you been a dancer?
I’ve been dancing since I was a young girl. In the womb I could almost say!
Is there a particular style of dance that Delou focuses on?
Usually it’s West African folklore. So from any of the West African countries: Guinea, Senegal, Gambia, Mali, Ivory Coast. We do other countries, but our expertise is more geared towards the west.
Are there commonalities among the dances from these countries?
Some of the dances are shared between surrounding countries, but for the most part, the dances are pretty different. What’s similar between them is the dances are usually done for a particular reason: a marriage, or a birthday, rites of passage, death. So usually African dance is done for a specific reason.
What is the overall goal of DanceAfrica Miami?
In general, the festival is used to bridge the cultural gap, to bring communities together to experience the African diaspora.
We try to make it very diverse — not only [dance from] Africa, but also countries in the African diaspora, which means Haiti, Cuba, the United States. We try to showcase all of that at our festival.
Your program includes both dancing and drumming?
Yes, it has dance and drumming, or dance and music. The reason I say music is because we teach classes that deal with other instruments as well: the balafone, which is like the American xylophone, or the shekere, which is a gourd that has beads on it and is used as a shaker.
You are now operating as DanceAfrica. What does that mean?
DanceAfrica is a network of African dance festivals, in New York, in D.C., in Georgia and Pennsylvania. We are the newest city under this dance network. We transitioned to this over a couple of years. In 2011 we invited Baba Chuck Davis, the founder of DanceAfrica, to give him our Cultural Community Outreach Development Award. And when he came, he … basically endorsed us. He came every year after that. He set us up and put us in the right place so we can be successful with DanceAfrica Miami.
He passed away earlier this year. Do you have any reflections on his legacy?
He was such a free spirit. Even if you didn’t know him, you felt like you did. As a young girl, I had encounters with him — and I’m sure he probably didn’t remember me. But when he came in 2011, he knew Folayan was Njeri’s daughter and that’s all it took. He was like, “Are you doing good in school? Are you dancing? Are you smiling when you’re on stage?”
It seems he really was a leader in the largest sense for the African dance community.
Absolutely. What made him special is that he’d been dancing since he was a young boy, and he continued to create. He kept it authentic, but he was also very creative at the same time. And anyone who danced with him or around him, they know the discipline he portrayed. If you see somebody dancing, you might admire their dancing; you probably don’t know where they trained, but then when you talk to them, they say, “Oh Baba Chuck was my teacher.”
For this year’s festival, how will you acknowledge his passing?
We’re doing tribute dances to him. We’re also going to have a libation for him. Once he transitioned [to death], we changed our program around. At the beginning we’ll do a slide show, and then we’re performing his favorite dances.
DanceAfrica Miami, Delou Africa’s African Diaspora Dance and Drum Festival of Florida. All-day dance and drum workshops, Friday through Sunday; concert Saturday, 8 p.m. Little Haiti Cultural Complex, 212-260 NE 59th Terr., Miami. Prices vary, adddff.delouafrica.org.