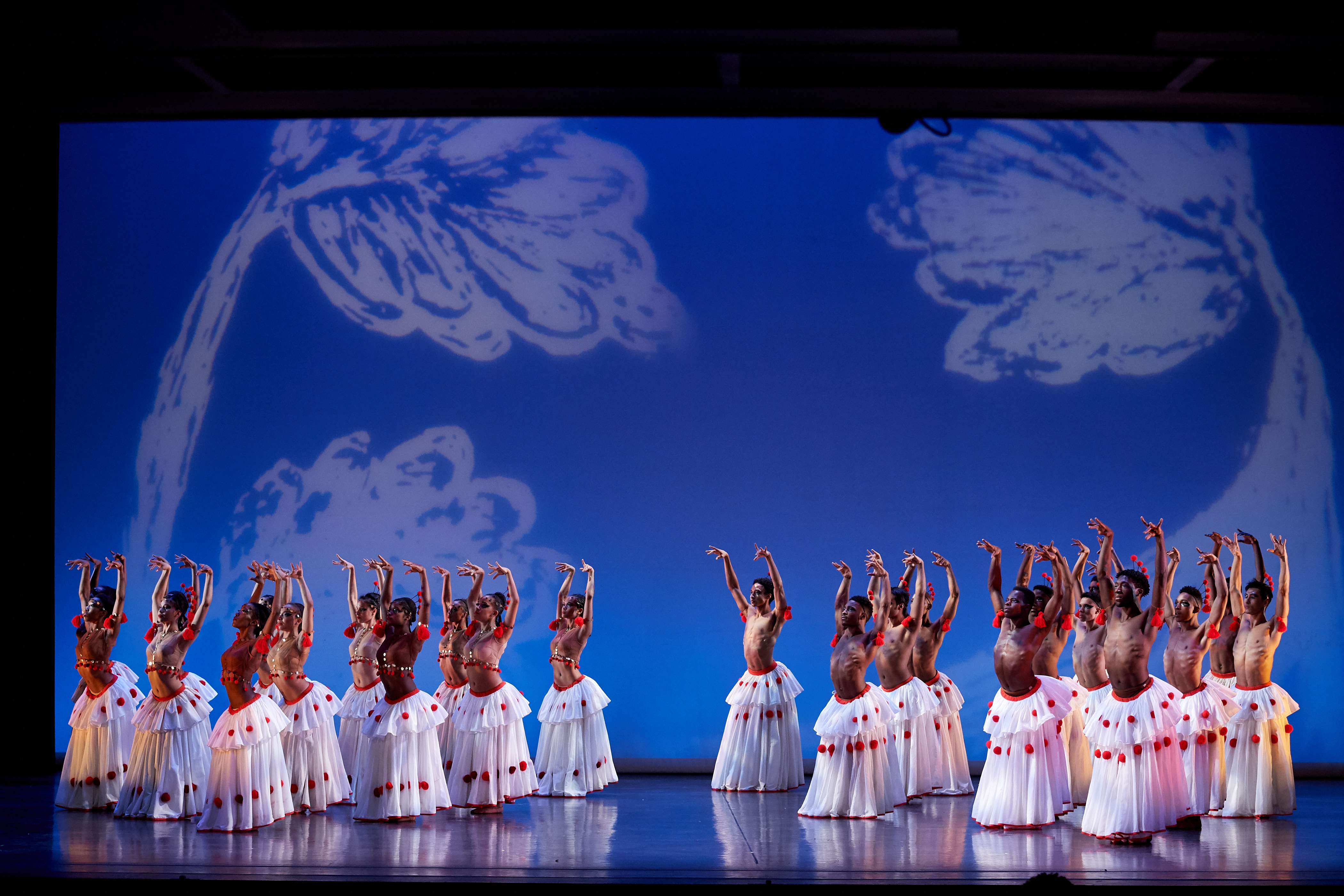 A night at the ballet can turn into lifelong inspiration when Dance Theatre of Harlem comes to town. The excitement the company generates onstage has a way of radiating into every corner of the dance community, with the wide range and high reach of its repertory supported by racial and social inclusivity, central not just in productions but also in workshops and master classes.

For a second year in a row, Dance Theatre of Harlem will perform at South Miami-Dade Cultural Arts Center Jan. 26-27, increasing its local impact with a varied program that includes “Dougla,” choreographed and designed by magician of the footlights Geoffrey Holder. This blazing, 1974 signature work will feature members of South Florida’s Peter London Global Dance Company alongside the DTH cast, creating the kind of bond that has all the markers of extraordinary fortune.

“The collaboration is a tremendous opportunity in its performance and educational aspects,” says Peter London, Global Dance’s artistic director. “Two companies working together in this manner isn’t common in the dance world. And one can only hope it sets a precedent for what is possible.”

The venture has required vision and dedication, benefitting locals while adding needed personnel to the New York-based company for such an elaborate work. Four men and four women from Global Dance were chosen to dance in “Dougla” by DTH artistic director Virginia Johnson after she saw the Miami group perform during her visit here last year. Since then, DTH ballet master Donald Williams has come down to polish the dancers’ interpretation through intensive coaching. It’s helped that London and the late Holder, both natives of Trinidad, grew up amid the multicultural heritage of the island, ground for a robust expressiveness that Global Dance has come to grasp and will let fly in “Dougla,” which enacts the boisterous wedding of an Afro-Caribbean man and an East Indian woman.

For Global Dance ballerina Reshma Anwar, dancing in “Dougla” brings double satisfaction, as a boost to her artistic growth and an affirmation of her background. A native of Germany, the 26-year-old grew up around classical Indian dance — which Holder incorporated into his choreography — because her mother hails from India. In rehearsals, Anwar was interested to learn that “dougla” is slang for a person of mixed African-Indian heritage.

“I love how this dance joins African movements to those of my heritage. It feels so natural to my body,” says Anwar, who singles out the choreography’s emphatic eye and hand motions — rare in Western dance — as a fascinating way to signal intense feelings.

Anwar finds further appeal in the streaming rainbows of Holder’s costumes and the keenly percussive score by the choreographer and Cuban-born Tania León, DTH’s first music director. “I’m more open to wherever dance will take me after so much enrichment,” says the ballerina, impressed by the dimension of the piece.

“This has really been a big project,” director Johnson agrees. “Usually, we look for dances that are, yes, elegant but also streamlined, allowing for the practicalities of what we can pack and take on planes. But ‘Dougla’ is about pageantry, visual spectacle. So it’s a more difficult show to take on the road. We have to be very selective about what cities we bring this to.”

Miami is only the second place — after New Orleans last fall — where audiences will enjoy the revival of “Dougla” outside New York. “It’s unique and welcome that we’re getting to spend so much time in Miami,” Johnson emphasizes. “We don’t often have the chance to return to a city on consecutive years. The residency is a beautiful idea the Arts Center had. This way even those who saw the company already can enjoy another side of it.”

And the bill that includes “Dougla” upholds Johnson’s belief that “ballet can be many things.”

Choreographer Darrell Grand Moultrie continues to contribute to the company’s repertoire with “Vessels,” reflecting different phases of spirituality and legacy, with a score by contemporary composer Ezio Bosso. The piece differs greatly from the same choreographer’s jazzy “Harlem on My Mind,” which DTH staged here last time. “An ensemble for 10 dancers in various movements, ‘Vessels’ is pure dance and very dynamic,” says Johnson, thrilled with the rise of this artist from the neighborhood who grew up watching DTH.

“Adagietto #5” is a trio to the slow movement of Mahler’s Fifth Symphony. Johnson describes Royston Maldoom’s work as “very sculptural and sustained. Pulled up and soaring, it’s what ballet does so beautifully.”

For classical fireworks, there will be Petipa’s “Le Corsaire Pas de Deux.” “This is something we’ve been doing since the ’70s,” says Johnson, underscoring the importance of strutting out a 19th century heirloom for historical perspective. “Now, we have a new generation of dancers, and I wanted them to have this challenge. It’s something everyone’s familiar with and really shows how grand ballet is.”

With “Dougla” in prominence — taking community engagement to a new level — this lineup has particular meaning for the director, as Dance Theatre of Harlem celebrates a half century of dancing since its founding by the legendary Arthur Mitchell, who died in 2018.

“At its very deepest level, this fulfills Arthur’s belief in the power of art to transform lives, and that’s especially important for young people today as arts education keeps getting cut,” Johnson says. “Letting them see these works, which maybe they didn’t even know existed, is a way to give them a better life, a more expansive way to look at the world.”