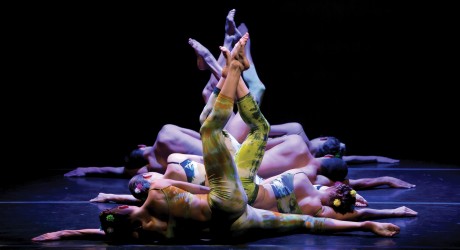 A man and a woman exchange seats on a pair of wooden chairs at the center of a dance studio at the Little Haiti Cultural Center. Each takes turns partnering with a second man, who is torn between the two. The woman appears unaware of her rival, even though he mimics the spirals and lifts of her duet on the floor behind her. Collapsing into the second man’s arms, spinning away from him, then back again, the first man gradually displaces the woman as the second man’s partner. “Nice,” a tall woman with cropped blonde hair, calls out as the two men sway in a tender embrace. During a rehearsal of the dance piece “Nocturnus,” Hannah Baumgarten is serving as a second pair of eyes for choreographer Diego Salterini, her long-time collaborator and co-artistic director of the Dance Now! Miami ensemble. Both choreographers are giving each other feedback on new pieces that will premiere this weekend. The two have been dancing their own complicated duet since they met at the Miami Beach dance studio of the Performing Arts Network in 1997. “We had this amazing synergy from the moment we met,” Baumgarten recalls. The handsome Italian had recently followed a romantic interest to Miami from Rome, where he was a featured dancer on television variety shows. In a reversal of the love triangle depicted in “Nocturnus,” that romance ended, but Salterini and Baumgarten’s creative and professional partnership has endured more than 16 years. “We are an old married couple,” Salterini jokes. The he adds seriously, “I never had a person before where I could say, ‘I’m stuck [choreographing a piece]. Can you finish this please?’” “Our greatest strength is our teamwork,” Baumgarten adds. “What we do together.” In the beginning, the choreographers worked with a group of 14 dancers, all performing without pay because they believed in their friends’ work. After incorporating as Dance Now! Miami in 2000, a limited budget from grant funding and donations demanded the company shrink to half that size. “The irony is that as the company becomes more professional as an organization…” Baumgarten begins. And Salterini finishes, “…the more turnover we have in dancers.” That’s because the length of the dancers’ annual contract for rehearsals and performances has fluctuated from 13 weeks a year to as many as 24. Though some of the dancers have remained with the company for as many as eight years, all eventually leave for longer term or more lucrative jobs. The company’s possibilities changed dramatically in 2009, when Dance Now was awarded a long-term residency at the Little Haiti Cultural Center that provides class, rehearsal and performance space. “We were able to reallocate funds to dancers and production,” Salterini points out. Dance Now also has been eager to share this windfall with the rest of Miami’s dance community, hosting events such as the annual Daniel Lewis Dance Sampler and a variation on open mike nights for dancers, called Open Stage, in the Cultural Center’s 260-seat theater. “It’s a great resource for the community,” Baumgarten notes. The Dance Now directors have a clear sense of their place in that community. “We’re not avant garde,” Baumgarten observes. “We both love the traditions of modern dance created in this country at the turn of the last century.” “I firmly believe that the real revolution right now is to bring back technique,” Salterini insists, dismissing post-modern dance movements that rejected technical virtuosity in favor of everyday movement. Gesturing toward the dancers, who are relaxing during a lunch break, he adds, “People come to see what these bodies can do — that no other bodies can do.” For Baumgarten, it’s the experience those bodies represent that matters most. “We just want to bring this city to light on stage,” she explains. “We have our Cubans. Our Caribbeans…” Typically, Salterini breaks in: “… my gayness and your Jewishness.” Rather than attempt to break new ground, Dance Now attempts to establish common ground through beautiful movement. IF YOU GO WHAT: Fall For Dance Now! “Nocturnus” and “Water’s Edge, The Long Walk: Stories of the Seashore” WHEN: 8:30 p.m. on Friday, Nov. 22 and Saturday, Nov. 23 WHERE: Little Haiti Cultural Center, 212 N.E. 59th Terr., Miami Tickets cost $10 to $20. Information at 305-975-8489 or dancenowmiami.org. This article first appeared in the Miami Herald Photo credit: Jenny Abreu