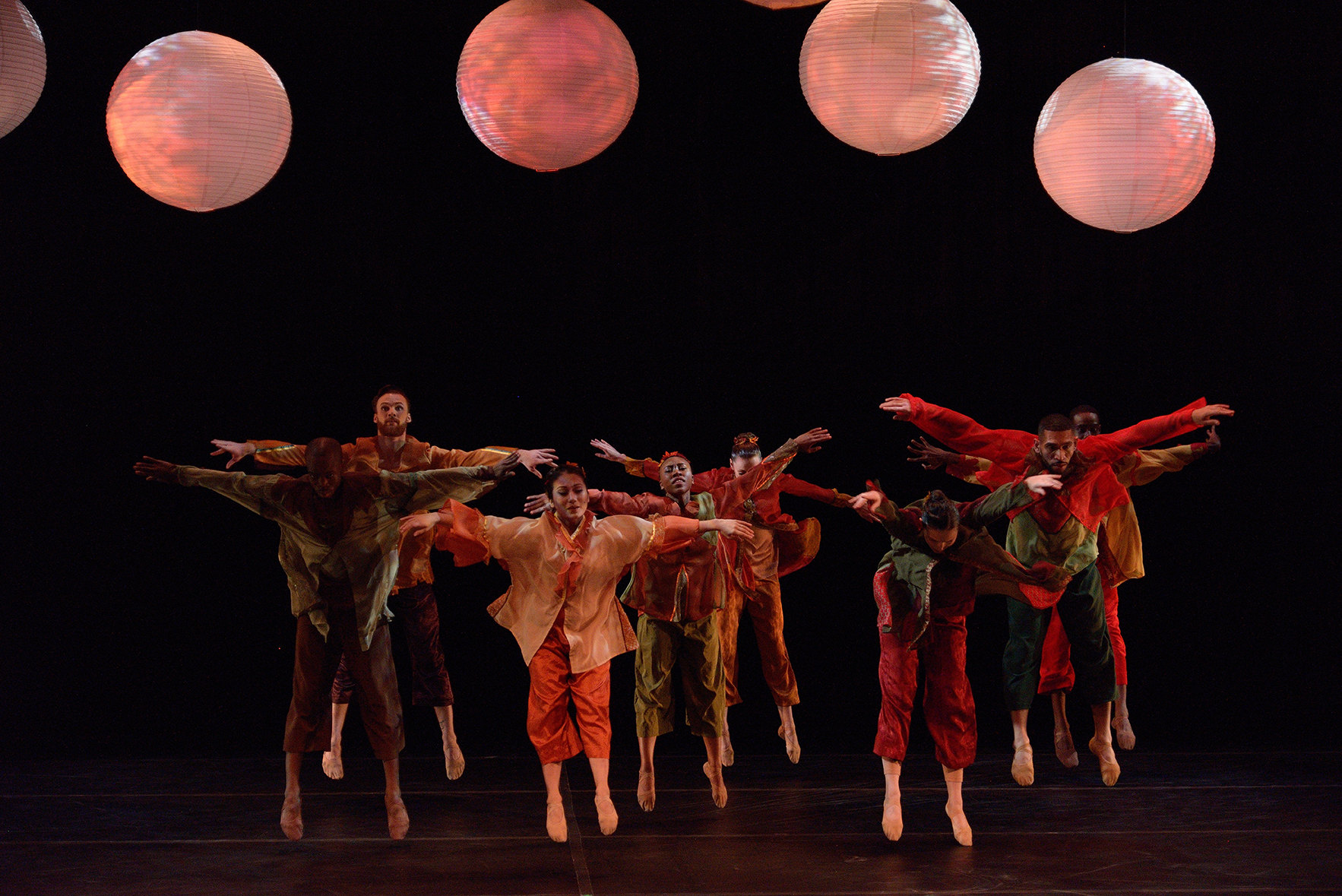 Dance NOW! Miami artistic directors, Diego Salterini and Hannah Baumgarten addressed a full house at the Colony Theatre for the start of their 2018-2019 season on Saturday December 1st, observing a moment of silence to mark the death of former President Bush and welcoming Miami Beach political and cultural luminaries in attendance.

Program I was marked by provocative works whose diverse choreographies showcased bold experiments with narrative and startling logics of movement.

For instance, on Saturday the company premiered Baumgarten’s “Grace” – a work based loosely on the Biblical story of Hannah.  The work opened to dancer Allyn Ginns Ayers, dressed in loose fitting black, seated on the floor cradling her lower leg in her arms.

The scrim rose on columns of white fabric as the piano took up a waltz.  Ayers pirouetted to the ¾ time circling between the columns then was joined by Marcus McCray in the role of a young child, hugging the petite Ayers at the waist or flailing his arms at his sides with toddler-like lack of control.  Throughout the sequence Ayers hovered above him, and some of the most moving passages from Program I were of the two playing, Ayers tickling McCray with light touches to the body or teasing him to stand by gently tapping his collarbone.

With a shift in the music McCray began to pirouette and support Ayers through lifts and turns.   “Grace” closed with McCray lifting Ayers overhead, her legs locked around his neck, arms arched back, facing toward the light.  There was a lot to like in this piece.

This was followed by the world premiere of guest choreographer Christopher Rudd’s, “F(l)ight”. Divided into two parts, Rudd’s choreography – especially in the first half – followed a merciless logic of transformation where Rudd allowed the logic of the positions taken by couples and groups to dictate resolutions that dripped with surprise.

“F(l)ight” opened to Jenny Hegarty Freeman seated on the back of Matthew Huefner, both dressed in grey and bathed in bright light.

As the cello soloed, Freeman snapped her fingers then kneaded the muscles of her arm. She dominated Huefner into forming two interlocking pushups, their arms held rigid like molecular bonds. The sequence completed with Huefner anchoring Freeman in a deep and gorgeous attitude.

Renee Roberts and Anthony Velazquez entered with many of the same movements but introduced reversals of position.  For instance, the pair repeated the interlocked pushups but with the much smaller Roberts suspending the much larger Velazquez above her. The moment was riveting and characteristic of many of the surprises Rudd’s choreography had in store.

The dancers showed impressive unity through challenging positions.  For instance, in one sequence, Benicka Grant undulated over the stage as if swimming in mid-air while Roberts, Velazquez, Freeman and Huefner anchored her legs.

Act II opened with “Random Patterns of Falling Leaves”, a lovely work by Baumgarten and Salterini from 2012.  The sound of wind, a scrim marked with patterns resembling pine needles and ten large white Chinese lanterns suspended above the stage accented the feel of late autumn.

For instance, with the first chords of the violin Ayers at the center took her arms up and over, wrists loose, into a pirouette, then repeated the sequence.   One by one the other dancers joined her.  Patterns emerged in twos and threes that suddenly coalesced into shared group sequences.   Small issues with hesitation in the transition from small to large group formations distracted little from the overall effect of the piece.

Another notable performance was a solo by Roberts.  With her right hand on her shoulder she reached back then arched over before opening up into an attitude that she gradually pivoted at the center.  The passage was built on this signature pirouette, and it worked magic with the music.

Also important was the pas de trois between Velazquez, Huefner and Freeman.    First the two men mirrored one another in sudden drops to the floor, pressed up through side plank then flipped.  Then they partnered each other in lifts as when Velazquez pivoted with Huefner held in a childlike embrace.

Particularly gorgeous here, Freeman joined them with the most musically sensitive performance of the night, at one point leaping at Huefner only to snap around and have him catch her in a seated position.  Huefner then lifted her effortlessly overhead to Velazquez who floated her back to the stage.

Program I: NEW VOICES presenting Chris Rudd will be performed on Sunday, December 9, 2018 at the Alper JCC. For tickets, or to learn more about Dance NOW!, visit their website at https://www.dancenowmiami.org.