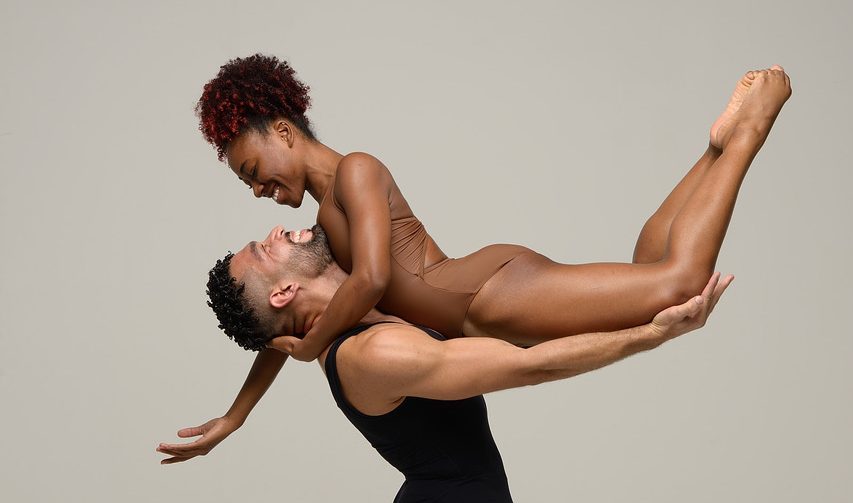 Dance NOW! Miami’s Anthony Velazquez and Benicka Grant will perform in Program I: “This Moment, Here,” on Jan. 10. (Photo courtesy of Simon Soong)

Amid the struggles of 2020, dance companies were forced to innovate at every stage of the artistic process – with performers doing their strength-conditioning in kitchens, rehearsals taking place in “pods,” and shows reaching audiences online.

Few dance companies have encapsulated the pandemic experience like Dance NOW! Miami. Since company shutdowns started in March 2020, DNM has rolled out 12 new programs working every angle of the pandemic, from the biomedical to the sociopolitical.

On Jan. 10 at the North Beach Bandshell, the Miami-based modern dance company will push the envelope even further with “This Moment, Here,” an emotional, eight-part archive that chronicles the events of 2020 in DNM’s most powerful treatment to date. The production, which will be offered virtually through its YouTube channel, tackles subjects ranging from the quarantine to civil unrest at the death of George Floyd to the 2020 election.

In a joint email statement, DNM co-artistic directors Diego Salterini and Hannah Baumgarten described “This Moment, Here” as having emerged “from the need to reflect on this moment in time and how 2020 is the culmination of many years of dissonant vibrations that continue to attempt to unravel the fabric of our society. The virus, Trump, police brutality, the political divisions are the manifestation of a world that is losing its humanity; a world where, through the fake illusion of easy mass communication and social media globalization, everyone is more and more alone.”

Several vignettes reflect on early moments of the pandemic, when shock prevented many from connecting emotionally with events as they were unfolding.

For instance, in “Prologue,” DNM dancers circle the floor to a jazzy, syncopated mesh of winds, strings and percussion, part of a new soundtrack created for the work by composer Federico Bonacossa. Matthew Heufner and Isabelle Luu Li Haas jog a circle while, in a corner, Benicka Grant and Anthony Velazquez anchor each other through lifts and turns. At the front of the stage, Renee Roberts solos in a half-dance, half-pantomime of quotidian tasks that range from gardening to washing dishes.

An emergency alarm screeches. The dancers freeze, scanning the room for threats. The action resumes, but the alarm again interrupts, and this time a dancer exits the floor until, finally, with the third alarm, those who remain don black masks.

Another vignette, “The Kitchen Table,” opens with Haas, Julia Faris, Joshua Rosado and David Harris seated or leaning around a table. None wear masks as they exchange sides, roll beneath the table, pile up in one corner, or scatter to the sides of the room, miming a heated conversation as they do so. The dancers’ circuits of activity repeat until Rosado falls to the floor.

At first, he struggles to return but soon falls again. Haas, Faris and Harris first hover over him before withdrawing to regard his outstretched body at a distance. They, too, then don masks.

Salterini says the vignette acknowledges the crescendo of deaths in Italy during the first wave: “It shows, in the beginning, families gathered together during the quarantine, fighting and playing, but then also transferring virus to one another as they did so.”

A prominent feature of “This Moment, Here” is its visceral treatment of events that are still in process.

In a brilliantly funny nod to the election cycle, “The Debate” opens with dancers perched on buckets, hands on knees, each in their respective corners. At the music, they fly to their feet, confront one another, jump in place, whirl and return to their corners. Their movements reflect the violence of the election’s rhetoric, but the tongue-in-cheek character of the movements playfully transforms it.

“This Moment, Here” closes with “8:46,” a work whose title refers to a period of time associated with the May death of George Floyd. Though the exact length of time that Floyd was pinned beneath a Minneapolis police officer’s knee has become unclear, the 8:46 number became a symbol for police brutality, and the company’s choreography symbolically lasts the full 8 minutes and 46 seconds.

The piece opens with streaming arpeggios, and the dancers in three lines. They turn, then first push out through their arms before pressing hands on their hearts. A duet begins between Velazquez and Grant. Starting from opposite sides of the floor, they first perform on their own. While Velazquez stretches out and spins freely, Grant repeatedly snaps her arms behind her back as if handcuffed or halts with her hands around her throat.

But as the melody turns pizzicato, they begin to circle, first Velazquez supporting Grant through lifts and pivots. The duet ends with them facing, their palms and forearms pressed against the other’s.

For Grant, the duet embodies the opposite of what happened to George Floyd. “The duet between Anthony and I portrays something else that could have happened in that time frame. He and I are two people who have no knowledge of one another at the beginning of the duet but somehow feel connected. Eventually, as the duet progresses, we form a relationship. We are full of joy and happiness. There are many moments within the choreography where I see it as, ‘I got you.’”

DNM dancer and rehearsal director Allyn Ginns Ayers thinks this is precisely the right time to look back on the past year’s issues and emotions.

“Of course, the pandemic and all of the societal issues that accompany it (social justice, health care, housing insecurity) are still unfolding and, undoubtedly, perspectives will change and evolve, as they have already,” she says. “But I don’t think the moment has to pass before one can or should comment on it.

“To the contrary, the process of creating – and consuming – art can allow us to reflect on, to understand, and ultimately to heal from this moment.”

WHAT: Dance NOW! Miami presents Program I: “This Moment, Here”

WHERE: On DNM’s YouTube channel, livestreamed from the North Beach Bandshell. The venue will be closed to the public.

ADMISSION: $10 “virtual ticket” is required to watch the performance online; available  at dancenowmiami.org or northbeachbandshell.com.

MORE INFORMATION: Check out the websites above, call 305-975-8489, or email info@dancenowmiami.org.