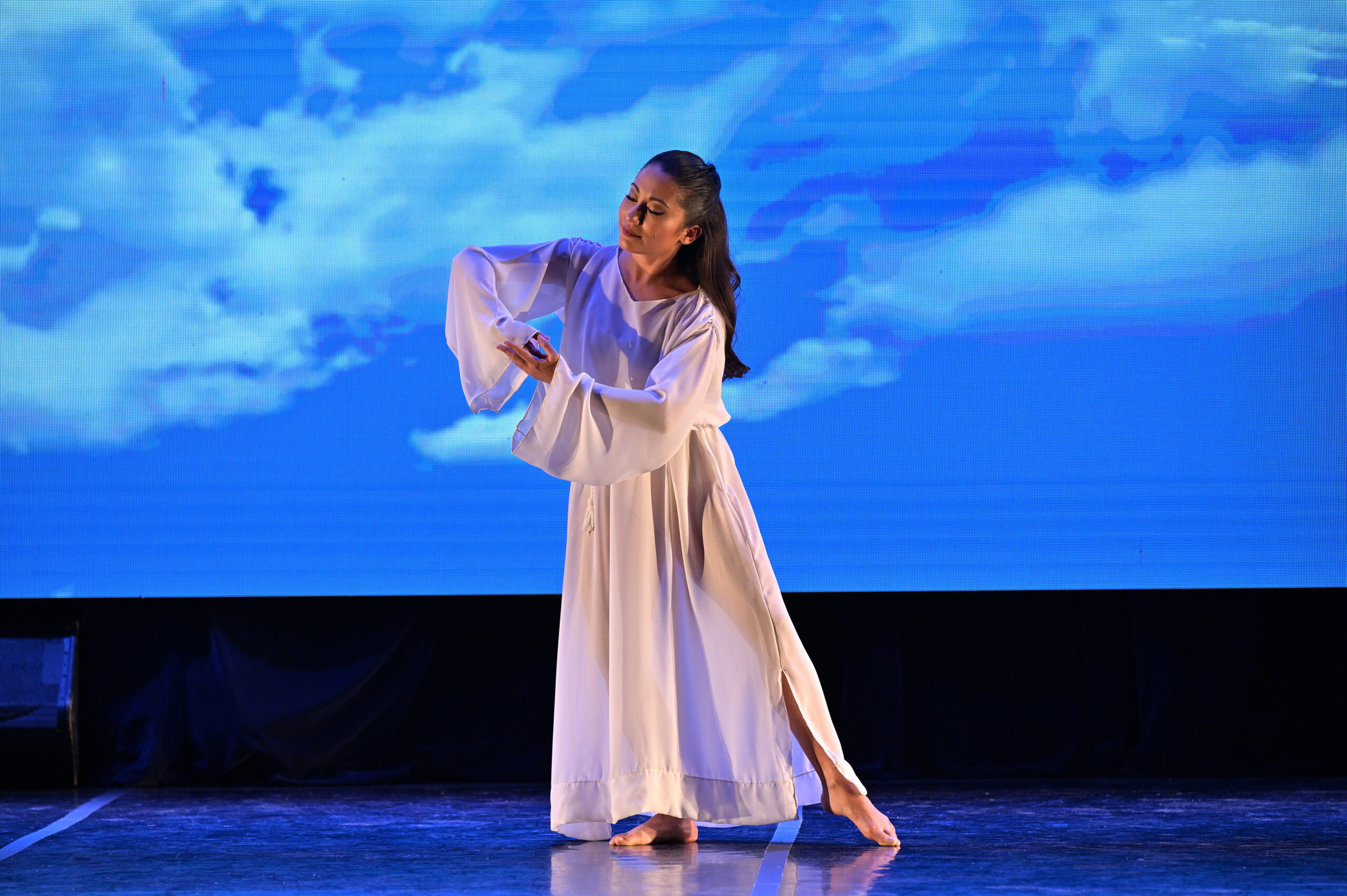 Allyn Ginns Ayers will dance the role of the mother in Isadora Duncan’s “Ave Maria.” (Photo courtesy of Simon Soong)

Imagine you could go to the theater today to enjoy a dance concert with Isadora Duncan.

Considered to be the “Mother of Modern Dance,” Duncan died in 1927 at age 50 when her scarf got caught in the wheels of a car while traveling in Nice, France.

Dance Now! Miami (DNM) will offer audiences an exciting journey back in time to see some of her works and appreciate a certain way of doing things, from a time when a viewer’s attention did not depend on a succession of stimuli, which often suffocates today’s creative projects.

At 8 p.m. Saturday, Dec. 11, in the Miami Theater Center (MTC) in Miami Shores, the company founded and directed by Hannah Baumgarten and Diego Salterini will present  a program titled, “Stories for the Holidays,” which includes four short pieces from Duncan.

With this performance, DNM wants to give its audience “the opportunity to enjoy the beauty of dance by presenting a series of short works with straightforward messages of love, passion, joy, and resilience,” says Salterini. “Each piece is a small vignette, from Duncan’s angelic figures in ‘Ave Maria’ and ‘Harp Etude’ to the nonbinary genre of Hannah’s ‘Die Frauen’ that celebrates the feminine in each of us.

“I will be presenting ‘Lunatico,’ an ode to the moon, masterfully danced by our youngest member David Jewett,” he continues. “And ‘Three Moments in Time,’ a series of duets that portrays three couples (or maybe it’s the same couple) in three moments of their relationship from the first date to the 10th anniversary. “

Adds Baumgarten: “The program also includes Jon Lehrer’s ‘Solstice’ and ‘All Shook Up,’ originally created for our former rehearsal director, Jenny Hegarty. It will be performed by an exceptionally talented DNM Youth Ensemble dancer, Nicole Espinel, who trains at Miami Arts Charter School.”

On this occasion, the South Beach Chamber Ensemble (SBCE) will accompany Dance NOW! on “Three Moments in Time,” “Ave Maria,” and “Lunatico.” Salterini tells us that, “the relationship between DNM and SBCE is almost two decades old. Every time we have the opportunity to work together, we do it. Using live music just improves everything.” 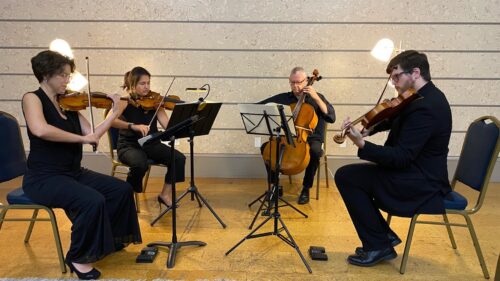 Baumgarten also explains how the idea of incorporating “Solstice” into the DNM repertoire came about: “Jon Lehrer is a contemporary choreographer based in New York. We love his energy and sincere approach to dance and invited him to come to Miami in the fall of 2020, but COVID derailed our plans, and we were only able to bring him now. His work is very dynamic, and a lot of fun, and he fits in perfectly with the company. His style is, in a sense, very similar to Diego’s and mine.”

Salterini predicts “it will leave the audience with a pleasant and serene smile. It is very satisfying to see it and, according to the dancers, it is also a pleasure to dance it.”

But Duncan’s works are the highlight of the program, and Andrea Mantell Seidel, former artistic director of the Isadora Duncan Dance Ensemble in Miami, has been in charge of restaging them. So, in addition to “Ave Maria” and “Harp Etude,” the show will feature “Varshiavianka,” and “Dubinushka,” two of Duncan’s so-called “Russian revolutionary dances.” 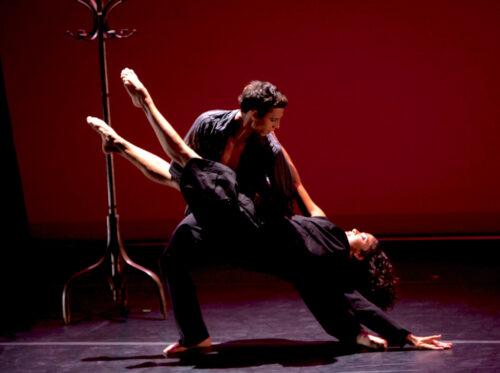 Asked about Duncan’s style and Mantell Seidel’s process of working with the company, two DNM dancers shared their thoughts.

For dancer Allyn Ginns Ayers, “Isadora Duncan’s technique consists mainly of simple walks, jumps and gestures. It sounds easy, but it is not. While in recent years, the trend in dance has largely been towards virtuosity, Duncan’s steps are trimmed and shed of any excess. Instead, we are asked to start with the ‘truth’ of the dance or character and let the emotion reveal the choreography. It is a precise way of approaching movement that has influenced my approach as a dancer even in works that have nothing to do with Duncan.”

After the death of two of her youngest children in an accident, Duncan choreographed Franz Schubert’s “Ave Maria” to revive her spirit, and as a tribute to them. This work has two versions: a solo and a group piece for six dancers. On this occasion, Allyn Ginns Ayers will dance the role of the mother with four other women around her. 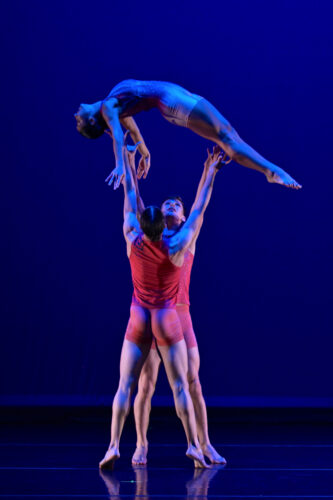 Even though DNM dancer Anthony Velázquez prepared for this show last season, he will not dance at this concert because of an injury. Still, he shares his point of view with us: “It’s different from other jobs I’ve done because I usually approach the choreography with a more technical approach, then the emotion follows. But Andrea Mantell Seidel demanded ’emotion before movement,’ and her words stayed with me since she staged Isadora’s works for us. I then used that approach for ‘La Malinche’ where I played a native Mexican, and it helped me connect with what José Limón was trying to convey. Duncan and Limón’s works offer stories that to tell them correctly we must start from a real place.”

And that is something always recognized and appreciated by the public. Limón’s “La Malinche” was a huge artistic achievement for DNM last April, and Duncan’s works promise to provide a stellar year’s end for the company.

To read this performance preview in Spanish, click here.

WHAT: Dance NOW! Miami presents “Stories for the Holidays”

COST: $40 for general admission, $25 for Miami Shores residents, and $15 for students with valid ID

SAFETY PROTOCOLS: Face coverings will be required inside the theater at all times unless proof of full vaccination is provided, according to the website.