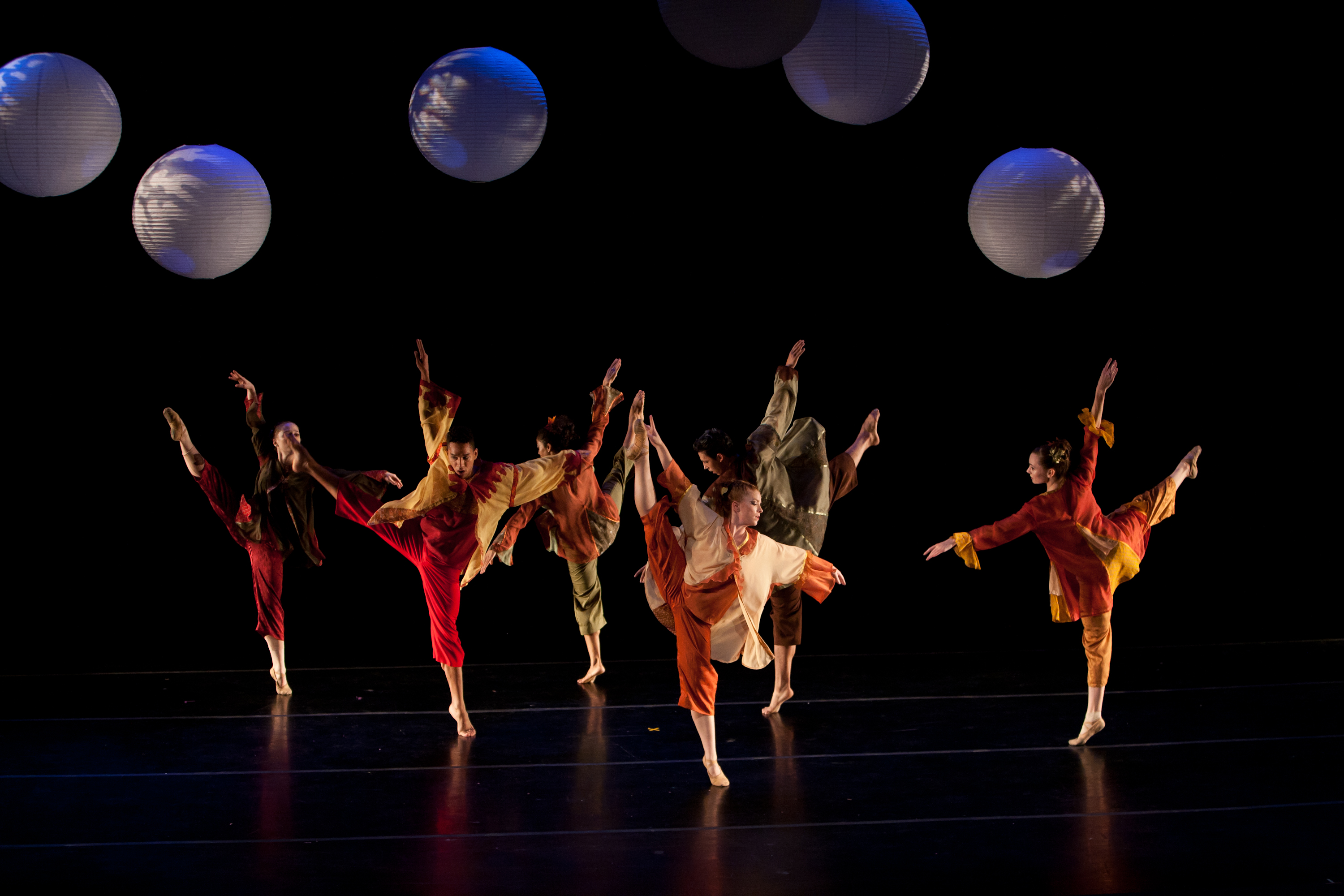 Slap. A hand hits the floor. Slap, another hand hits, then another, as each dancer takes turns hitting then falling to the floor. The dancers then move on to the next movement, their breathing barely audible as they move to another formation, each dancer connecting with another as if seeking some kind of balance between them. Modern dance has always had a ubiquitous relationship to the ground, to the pull of gravity towards the earth, as much as ballet desires to escape gravity.

Choreographer and dancer, Christopher Rudd, is a graduate of the New World School of the Arts. He is back in Miami to choreograph F(l)ight, a commissioned work for Dance Now! The piece is making its world premiere on December 1 at the Colony Theater as part of the New Voices initiative.  Developed This is the inaugural program for New Voices which Dance Now developed to give opportunities to the next generation of choreographers.  “What makes dance survive? Look to the future and at the past,” comments Diego Salterini, co-Artistic Director of Dance Now! Miami.

Daniel Lewis, founding Dean of Dance of New World School of the Arts, watches from the side. He has been Rudd’s mentor for many years, passing on his considerable knowledge of the arts to the younger man. Lewis loves to share his experience as a mentor as he benefited from mentor relationships with renowned artists: Anna Sokolow, Jose Limon and Martha Hill. “I took the best of each and passed it on,” Lewis says.

Since leaving Miami, Rudd has expanded his horizon. His New York based troupe, RudduR Dance, spent time in France and also time in West Africa. He was a founding member of the Carolina Ballet, performed and choreographed for Les Grands Ballet Canadiens de Montreal, the Elizabeth Streb company and Cirque du Soleil. “I speak with my art,” says Rudd.

Working in the studios of the Little Haiti Cultural Center, Rudd is preparing his piece. The dancers are working with concentration and intensity, they are lifted, placed back on the floor and push the rules of physics with their bodies. “My goal is to communicate with what I’m working with. Physicality is innate,” comments Rudd. “I try to create movement so that the audience can feel that they are in the work,” explains Rudd.

Dance Now! Miami is entering its 19th season. “Miami has developed enough that we are in our third generation of choreographers,” says Hannah Baumgarten, co-Artistic Director of the company.  Each generation is helping the other, and the evidence is evident in the numerous choreographers now working in Miami. This year Salterini and Baumgarten are bringing back two pieces from previous seasons and a world premiere. Melody in Four Parts: Just Traveling and Random Patterns of Falling Leaves are revivals. Grace is a world premiere by Baumgarten.

Melody in Four Parts: Just Traveling, is choreographed by Salterini and takes us through the cycle of life: birth, life, death, and the beyond. The original poem is powerful as is the dance. The dancers intertwine with each other, go over and under each other, as the cycle continues they lift and hold up each other and when death arrives in the form of a trio, it is not a surprise but a part of the cycle. The movements are earthy at times, light at others, but the connections between the dancers are always charged with humanity.

Grace, choreographed by Hannah Baumgarten tells the story of the biblical figure of Hannah. Baumgarten delivers a work which depicts the sorrow and the sacrifice of Hannah’s story.  Allyn Ginnsayers, the dancer who portrays Hannah says she “thinks about longing for something, the joy of having what you long for; thinking that a relationship has to change, has to evolve and grow to turn into something different, letting go of what you love.” Ginnsayers brings a realistic performance to the dance which starts as a poignant solo then evolves into a memorable duet. Hannah moves us with her unshaken faith and devotion.

The final piece on the program is Random Patterns of Falling Leaves, choreographed by Salterini and Baumgarten. It is an ode to fall, to nature moving onto the cold of winter, pulling us along its deadly path. The dancers begin together like trees in a forest. The movements are at times calm and at others chaotic. The dancers’ movements make it clear that fall is upon us and winter is not long behind. Dancer Renee Roberts delivers a solo full of tenderness and hopefulness. “I try to manufacture the feeling of fall. I think of lightness and inner peace”

Back in the studio, the dancers are at ease, on a break. Daniel Lewis prepares to leave, his job is complete. What, I ask, does he look for at this stage of the rehearsal process: technique or artistry. “Artistry,” he says without hesitation. The studio is immersed in artistry.