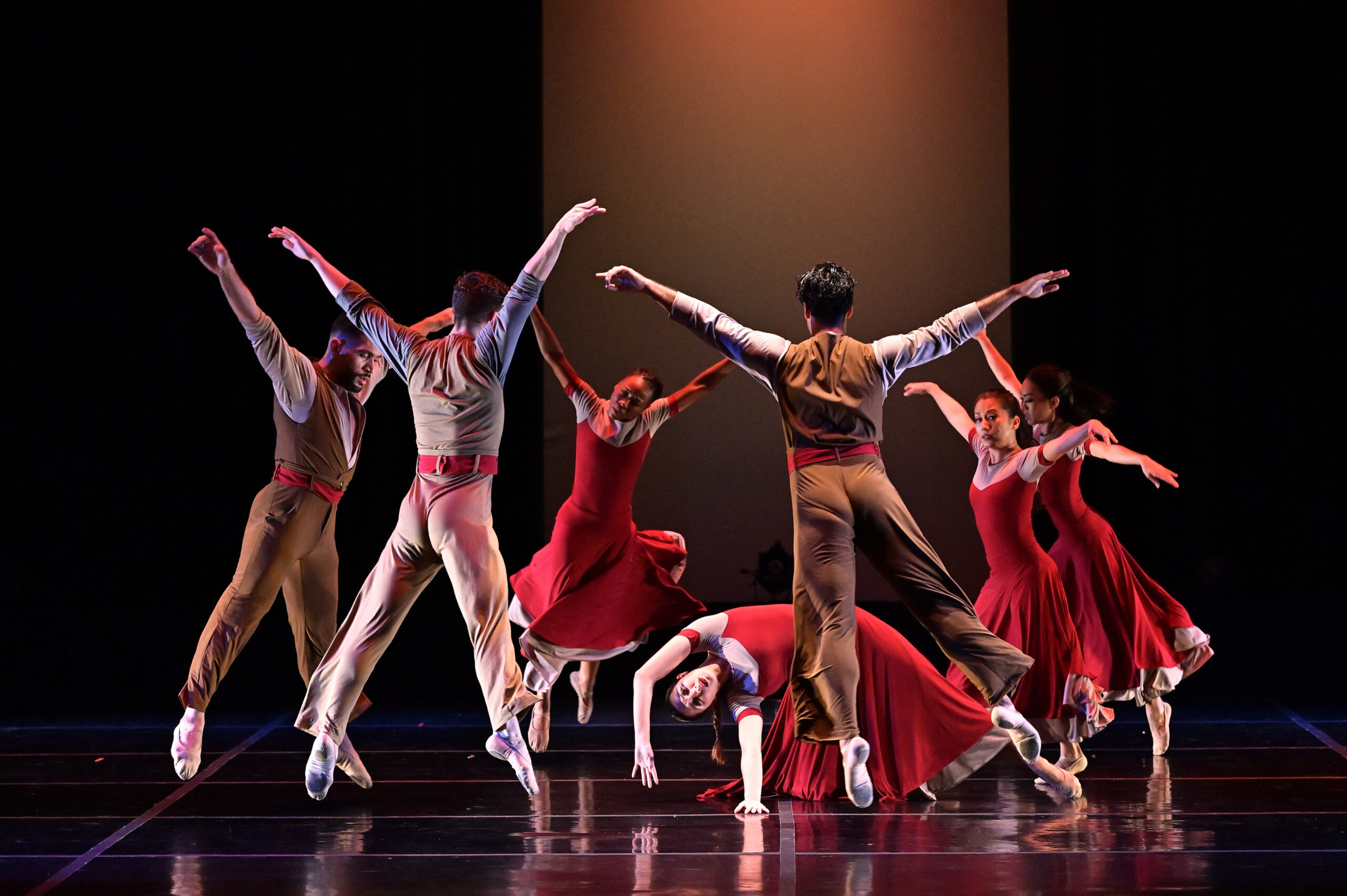 Dance NOW! Miami in “Anusim, What is Hidden is Never Lost…”, a work by Hanna Baumgarten and Diego Salterini will be performed in Program III, which also features New York’s Limón Dance Company. (Photo courtesy of Simon Soong)

The Limón Dance Company celebrates its 75th season and returns to live performances in a historic team-up with Dance NOW! Miami.

Born in México, José Limón was the only major Hispanic choreographer to co-found and lead an American dance company during the formative years of Modern Dance. Limón died in 1972 but his works thrive 50 years after his death.

Dante Puleio is a former Limón dancer and has been the company’s artistic director since 2020. He identifies Limón’s continued influence as a key to understanding 20th-century dance. 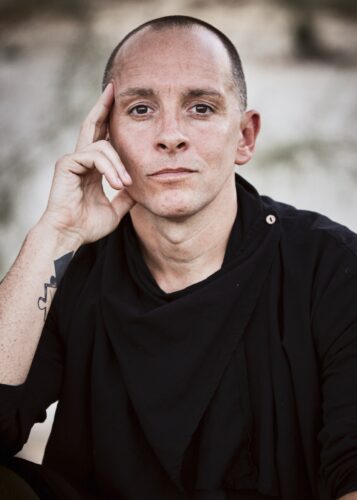 Dante Puleio is a former Limón Company dancer and has been the company’s Artistic Director since 2020. (Photo courtesy of Kelly Puleio)

“There are legacy companies in New York City like Martha Graham and Paul Taylor whose founders died and yet their works continue to live,” says Puleio. “We were the first Modern Dance company to survive the death of its founder.”

Puleio continues: “People like Danny proved that a dance company founded by a charismatic founder could survive.” He’s referring to former Limón dancer and founding dean of dance at New World School of the Arts Daniel Lewis who plays a key role in the upcoming team-up between the two companies.

In three South Florida performances on Thursday, May 12, Friday, May 13, and Saturday, May 14, Limón Dance Company will perform, “Waldstein Sonata,” a work for eight dancers based on Beethoven’s Piano Sonata No. 21 in C Major. Jeffrey Hodgson, provost at New World School of the Arts, will play the live piano accompaniment.

Although other dance companies have performed “Waldstein,” the Limón Company premiered the work for the first time on April 26 at its Joyce Theater season opener.

Limón originally intended to create dances to all of Beethoven’s piano sonatas but his death from cancer left the work unfinished. Three years later, Lewis took on the task of completing the work.

Lewis’ dance career is closely connected with that of the Mexican choreographer. He was already dancing with Limón Dance when he graduated from The Julliard School in 1967. Within a year, he began teaching dance at Julliard, taking over Limón’s introductory dance classes and serving as the Limón Company’s Artistic Director until 1975. 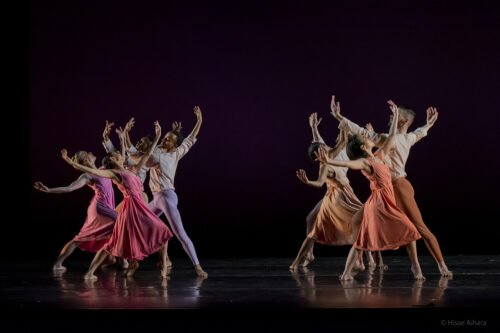 “It was Martha Hill, and the President of Juilliard, Peter Mennin, who commissioned me to complete “Waldstein Sonata” at Juilliard in 1975,” explains Lewis by phone. “Although the work has been performed all around the world, this is the first time the Limón Company has performed it,” he adds.

After the follow-up performances with Dance NOW! Miami in May, Lewis intends to donate the performance rights of the work to the Limón Company. 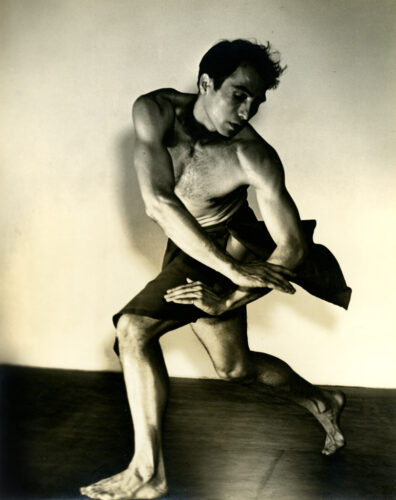 José Limón in “Danzas Mexicanas,” which he created in 1939. (Photo courtesy of the José Limón Dance Foundation)

“There are many styles of Modern Dance, and you have to be trained to express them properly,” explained Baumgarten. “Danny has been coming to teach DNM’s dancers. After all, he did write the book on the José Limón technique. Over the last five years, our dancers have become steeped in it.”

DNM will also reprise Limón’s 1947 “La Malinche” or “The Traitor” last performed by the company in 2019. A work for three dancers, it tells the story of a young Indian woman, Malintzin, given to Cortez when he arrived in Mexico.

“The two fell madly in love,” explains Baumgarten, “and she revealed all the secrets of the Mexican people – one of the dancers performs the role of ‘El Indio’ who represents the people of Mexico, and another role is performed by ‘La Malinche’, which means – ‘ The Traitor’ – in Mexican Spanish.”

The collaborative program will also include Limón Dance performing the choreographer’s 1967 work, “Psalm.” Originally inspired by Andre Schwarz-Bart’s 1959 novel, “The Last of the Just,” the dance is based on the ancient Jewish tradition that all the sorrows of the world rest within thirty-six Just Men, the Lamed-Vav. 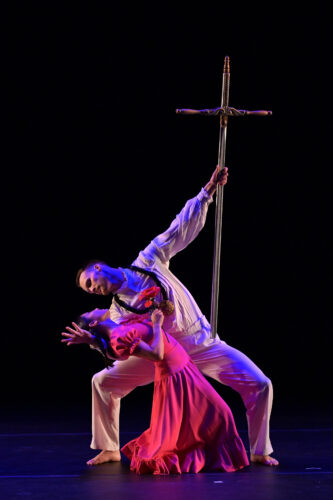 “It is about these men who uphold the world and its suffering without even anyone knowing that they are even doing it,” explains Puleio. “It feels like his spirit triumphing over death.”

Program III concludes with a DNM original “Anusim, What is Hidden is Never Lost…”, a work by Baumgarten and Salterini. “Anusim” depicts a rarely told story in Jewish history about the 1497 decree in Portugal forcing all Jews to be baptized as “New Christians.”

For Baumgarten, Program III captures DNM’s mission both to entertain and educate audiences.

“I think that the work of Jose Limón is essential to understanding modern dance. He’s not Isadora Duncan or Doris Humphrey, who of course later became his artistic director and mentor and created many works with the company,” says Baumgarten. “But Limón was one of those choreographers who established that dance could speak to the real living conditions of people.”

TICKETS: $50 for reserved seating and $20 for students with ID.