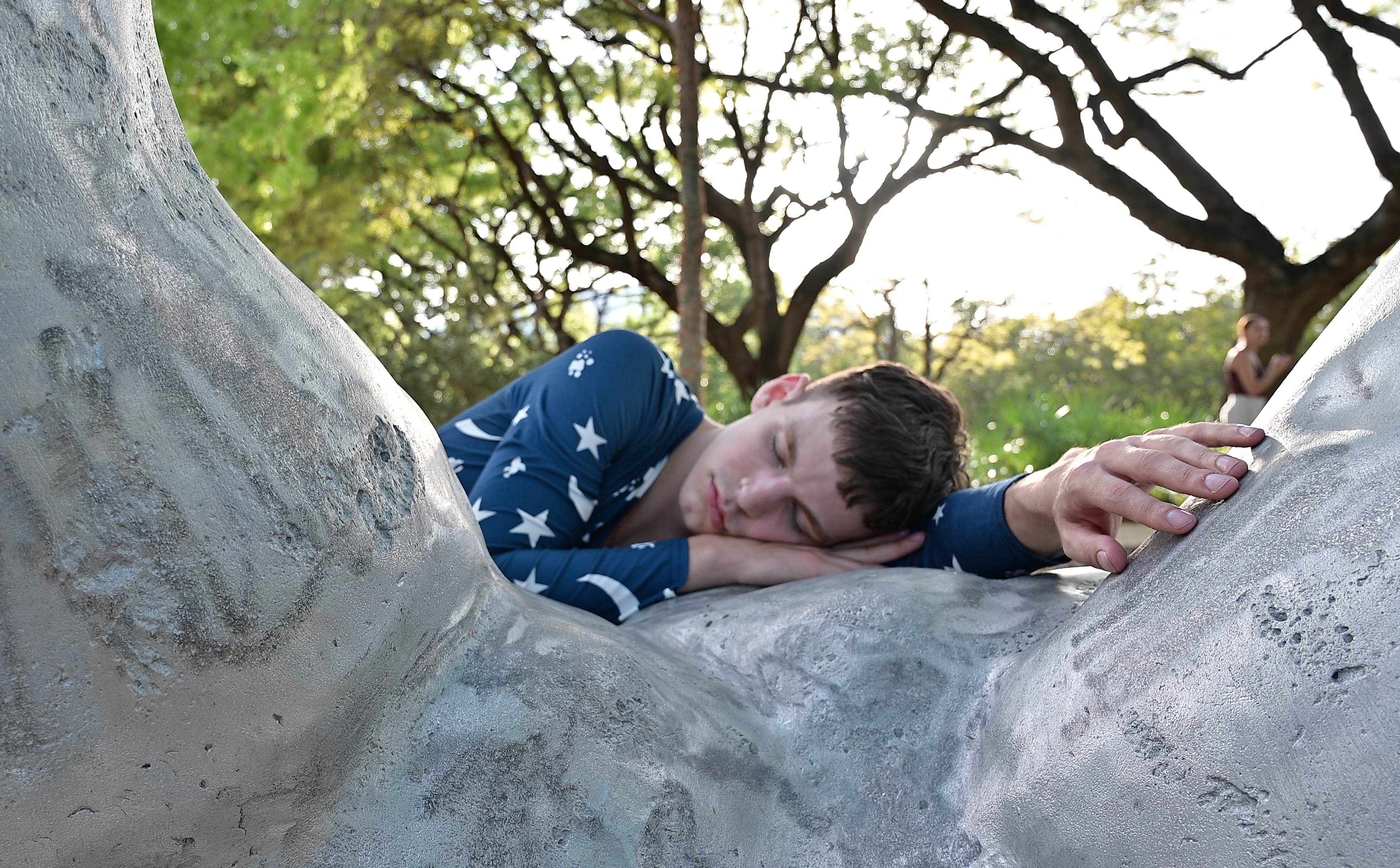 All the world may be a stage, but when performing beyond theaters, dancers still need a good foothold. They’ll certainly get that—plus the spurs of live music and evocative sculptures to interact with—in “Freeze Frame,” a triad of works set to animate public-art spots throughout South Beach.

The events, with choreography from Dance NOW! Miami’s co-director Hannah Baumgarten, music direction from Aleksandar Djuric, and production design by Bruce F. Brown, in cooperation with Miami Arts Charter School, bring the pleasures and particularities of site-specific dance to Collins Canal Park (on the north side of the Convention Center), Pride Park (across from the Center), and 1111 Plaza on Lincoln Road.  On-site performances are Thursday, Sept. 22 and Thursday, Sept. 29.

At each location, whimsical installations by contemporary artists turn the urban scene into a playground for the eyes and—in the case of “Freeze Frame” dancers—for exploratory bodies. 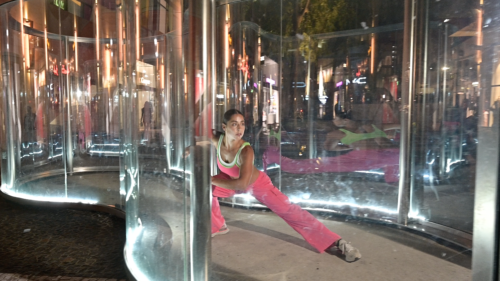 Not just from her choreographer’s perspective but as a longtime South Florida resident, Baumgarten wants the performances to celebrate Miami Beach’s investment in making art accessible in public places, an invitation to turn people’s wandering into wonder.

“These sculptures are really a coup for the city,” says Baumgarten. “When I started seeing them going up, I got very excited and went just to spend time resonating with them.”

To “Freeze Frame,” Baumgarten adds the label, “migrating spaces.” Audiences move from site to site on the trail of three performances, each eight to twelve minutes long and presented twice. To a degree, the set-up allows onlookers, within a two-and-a-half-hour frame, to fashion their own viewing experience. This factors in time for a leisurely progression that may include snack breaks and even a visit to the nearby Miami Beach Botanical Garden. 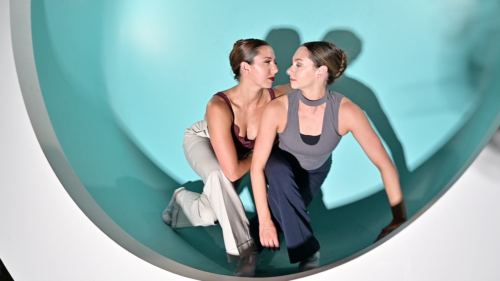 The Miami Beach OnStage encore presentation of “Freeze Frame,” funded by the State of Florida last year and this year by the City of Miami Beach’s Mayor and the city’s Commission, continues the choreographer’s career-long journey through site-specific creations, saying that she’s been involved with “this kind of work” since she was a student at the Juilliard School in New York.

“Putting performances on anywhere, anytime, supports my belief art can be democratic.”

As a developing dancer and choreographer, Baumgarten rolled out her projects in Manhattan, often in response to natural, architectural and visual-art elements. But she recalls that her interest dates back further.

Growing up in Santa Cruz, Calif., Baumgarten recalls climbing and dancing on a wooden sculpture outside of Stevenson College where her father was a professor.

The structure by northern California sculptor JB Blunk, in the shape of a boat, let her imagination set sail, she recalls, to a place where stories unfold while dancers—stretching, clutching, leaping—yield to or defy surfaces, both prickly and smooth. 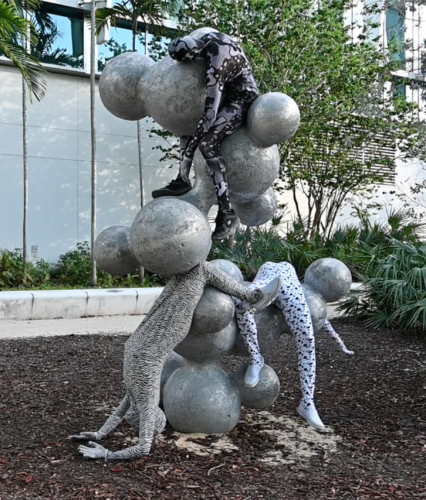 Early on at Dance NOW! Miami, Baumgarten found a committed partner for on-site presentations in the company’s co-director, Diego Salterini. They regularly devised dances for the Bass Museum of Art on Miami Beach—among other locations—riffing off its exhibits and front lawns.

“We got turned on to this term, ekphrasis,” explains Baumgarten. “That’s a process through which one medium reacts to—and transforms—another. A site becomes a voice, and without it the dance piece wouldn’t stand.”

Ekphrasis usually refers to poetry that comments on art objects—see John Keats’ “Ode on a Grecian Urn” or Anne Sexton’s communion with Van Gogh in “The Starry Night.” But choreography can also arise from a similar inspiration.

“This is not just about performing outside, as exciting as that is, to reach new audiences,” emphasizes Baumgarten. “It’s the integration of different art forms and how that synergy makes them more impactful.”  And dance, after all, has had this sort of relationship with music over millennia.

In “Bubbles,” the first dance at Collins Canal Park with performances at 6:30 and 6:55 p.m., audiences will encounter Joep van Lieshout’s sculpture group, Humanoids.  The globular and sinuous formations provide a dreamscape for a young man to come under the spell of three fantastical beings. Light as breath on water, the slinky dance sequences course by on the plink-plunk of steel pan drums.

“To make this choreography, I had to rely on interaction with the dancers, who were being asked to work on tall, slippery objects,” says Baumgarten. “We had to find the right shoes and gloves for traction and over several weeks developed what supported my narrative.”

Next is “The Deep End” at 7:25 and 7:40 p.m. performed to a recording of Claude Debussy’s “Pagodes”—a reflection of Javanese gamelan music in piano ripples, dreamy to pulse-quickening, which plunges viewers into complex emotions at “Bent Pool,” Elmgreen and Dragset’s doubled-over construction in Pride Park. 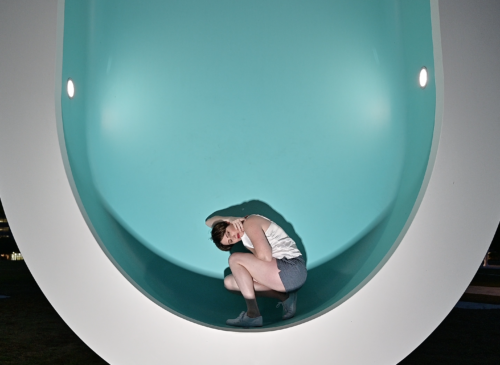 Renee Roberts in “The Deep End” at Elmgreen & Dragset’s “Bent Pool” in Pride Park, one in a series of site-specific performances in Dance NOW! Miami’s “Freeze Frame.” (Photo courtesy of Simon Soong)

As Baumgarten explains, “There’s a catch to this, with two dances—one joyous, the other angst-ridden—happening at the same time. On one side of the sculpture, a couple is falling deeply in love, and on the other a person is looking for companionship, not able to find it. My choice to use females honors same-gender love, which is under-represented in dance. And you have to decide how to see this—a challenge I’ve proposed.” Either walk around, watching the women’s actions intermittently, or watch one dance and then the other when it’s repeated minutes later.

“We couldn’t spend a great deal of time to prepare inside this sculpture,” points out Baumgarten. “So I found a confined space at the Little Haiti Cultural Complex, where Dance NOW! Miami rehearses, and developed the piece there.” Once an on-site permit came through, the group adapted better to the curved contours, scant depth and slickness of “Bent Pool,” she explains.

“The third piece is enclosed in glass. And I’d definitely suggest people watch it from different angles.”

“Trapped!” at 8:20 and 8:45 p.m. puts a solo, stewing in obsession, inside the reflective and translucent barriers of Dan Graham’s compact funhouse—titled Morris’—at the Alton end of Lincoln Road.  For this, composer Cliff Sutton custom fit his marimba and cajón score, performed onsite by four musicians, to the strenuous physicality that required the dancer to wear kneepads and thick sneakers.

“This is about the walls we build for ourselves and are driven mad by,” Baumgarten says. “But if we just find a moment of clarity, we can walk out and not be in such constant struggle.”

Thus, each installation along this pilgrimage is like a gate, each dancer its key-holder, each dance an inward promenade. Performances bear down on points in the shared cityscape to disclose deep personal reserves.

But why call this “Freeze Frame”?

Baumgarten is playing with words. “In the visual arts there’s a tangible object you can take away or revisit,” she says. “But not in dance. Yet here people can hopefully capture moments and relive them when they go back to the sites.”