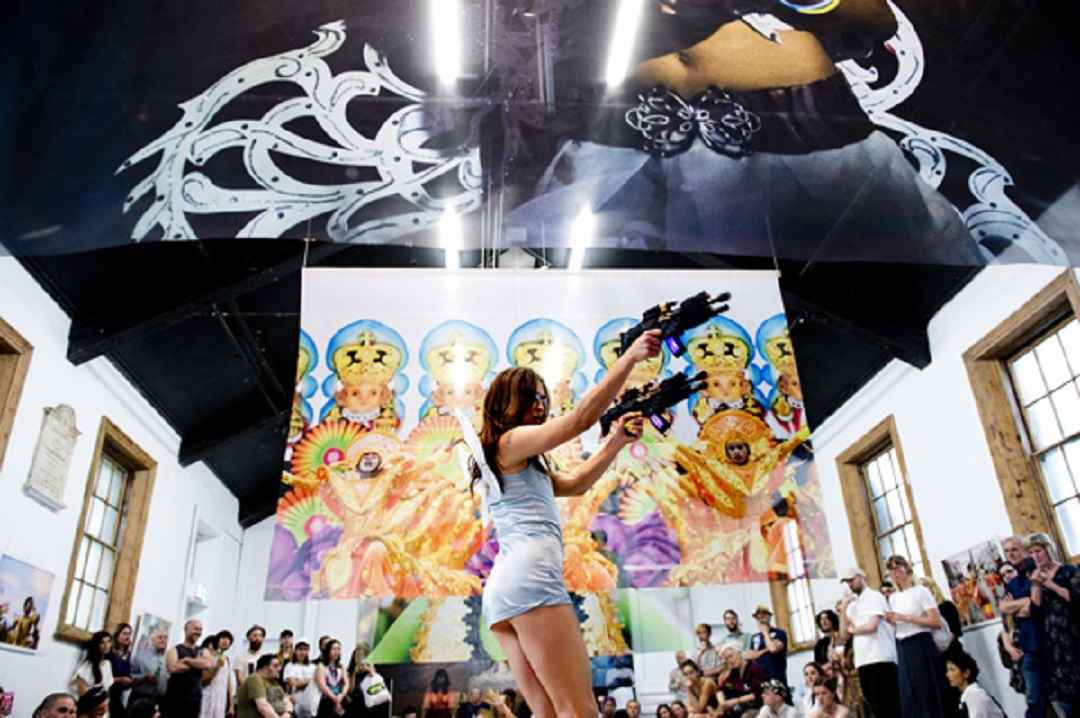 The title for the Creative Time Summit, “On Archipelagos and Other Imaginaries – Collective Strategies to Inhabit the World,” can be interpreted in many ways. And that’s precisely the point, and, most likely, exactly why the 11th edition of the New York-based nonprofit’s conference on art and politics is being held in Miami November 1 through 3.

The title is intended to create conversation for the conference, which positions itself as an annual “convening for thinkers, dreamers, and doers working at the crossroads of art and politics.” Previous sites for the Summit were Toronto, Washington, D.C., Venice, Stockholm, and New York.

With coalition as the Summit’s central theme, Miami’s sense of place is pivotal, and especially its historical connection to the Caribbean, to Latin America, and to the world. “The Summit is bringing together both local concerns and taking advantage of our unique position with Miami’s connection to the Caribbean and Latin America,” says Amanda Sanfilippo, curator and artist manager, Art in Public Places, Miami-Dade County Department of Cultural Affairs. “Then this is connected to larger dialogues.” Topics expected to be addressed range from immigration and borders to gentrification and tourism, and most especially the roles that art and activism can play in these issues.

The first Creative Time Summit, titled “Revolutions in Public Practice,” was held in 2009 at the New York Public Library, with the idea of creating a community of like-minded people, mostly, but not limited to, artists who were working in the areas of socially engaged art, participatory art, dialogic art, political art, and what Creative Time stated at the time was “a growing, but still difficult to define artistic practice.” The Summit is an offshoot of New York City-based Creative Time, in existence for the past four decades, which commissions and presents public art projects.

Sanfilippo participated in the 2011 Creative Time Summit, “Living as Form,” in New York. “When it came time for [the Miami-Dade County Department of Cultural Affairs] to submit ideas for the Knight Arts Challenge last year, the idea of hosting the Creative Time Summit in Miami came up. Creative Time was interested, the timing was right, and we got the grant.”

The Miami summit is co-presented with Art in Public Places of the Miami-Dade County Department of Cultural Affairs, with leading support from the John S. and James L. Knight Foundation.

Through various workshops, social events, community-driven breakout sessions, panel discussions and roundtables, field trips, interactive performances and film screenings, the three-day conference is intended to evoke conversation. Rosie Gordon-Wallace, founder, curator, and president of Miami’s Diaspora Vibe Cultural Arts Incubator, has delved into many of these conversations previously, and she’ll co-host a panel discussion about creating and living in a transnational art community like Miami.

She’ll be joined by Alix Pierre, Ph.D., professor of Atlanta’s Spelman College Department of African Diaspora Studies and World Languages and Literature. Gordon-Wallace says she has modeled this Creative Summit discussion after an initiative in Cuba, part of an international cultural exchange, which she has been hosting on the island for 18 years, supported by the Miami Dade Department of Cultural Affairs.

She also reveals that many of the questions and talking points come from her own experience having arrived in Miami from Jamaica in 1979. She wants her attendees to reflect on: “What does it mean to be intercultural? And how does transnationalism play out in the creation of your work?” Gordon-Wallace insists that her panel, which is being held at Miami’s Freedom Tower, not be presented auditorium style. “We do it in a circle, so that the artists can come and feel that the information is being shared equitably rather than us presenting the information. Since it is conversation style, people self-select who they are.”

Her panel overlaps many of the four thematic sections that the Summit will embrace: Facing Climate Realities, Reimagining a Green Future,” “Toward an Intersectional Justice,” “Resisting Displacement and Violence,” and “On Boundaries and a Borderless Future.”

The Creative Summit will get artists, thinkers, and doers immersed in asking these questions of themselves, Gordon-Wallace believes: “How do we perform? How do we turn up? What’s our social equity and how do we embrace it, define it, and negotiate for it. All of this transnational language will come out.”

Passes: $25 to $300, includes access to the full lineup of Summit programming, including presentations, performances and breakout sessions.