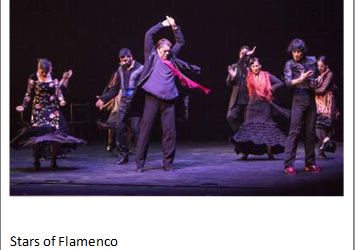 As the curtain closed on October’s jazz-infused Festival Miami, this month takes us into a flamenco season that will culminate next February with a stellar line-up for Adrienne Arsht Center’s Festival Flamenco. Saturday’s flamenco/jazz fusion concert at the Fillmore, with the Diego Amador Trio and dancer Joaquín Cortés, was a bridge between those two distinct but not dissimilar worlds. Improvisation is at the heart of both jazz and flamenco, and Joaquín Cortés noted from the stage that this concert was just that—“una improvisación” between himself and Amador rather than a fully developed integration of their work. With dancer and pianist coming together for just two pieces on the program, the evening was more like two concerts in one, with each artist showcasing independently their considerable talents. Diego Amador, who started off the evening with a long set, is what flamenco aficionados call a “monstruo,” a consummate musician whose hands race from one end of the keyboard to another with tremendous force, turning the piano into a percussion instrument as he drums out rhythms with the keys. The youngest of the Amador dynasty of flamenco guitarists, one can clearly hear that he too was a guitarist before teaching himself to play piano. It is extraordinary how he can coax a rasgueado, the most emblematic flamenco strumming pattern, out of a keyboard. His singing is raw and authentic, too, with echoes of Duquende or Camarón de la Isla, his choice of lyrics delicious. There was no printed program, so some audience members were caught off guard, getting up to go to the lobby just before Joaquín Cortés’s first number began. The curtain lifted with Cortés stage left, straddling a chair, hat pulled down low in a pose that was more Fosse than flamenco. This was clearly the fusion section of the evening, as Cortés danced alone to Amador’s jazzy piano riffs. Even at 44, Cortés still exudes the feline, preening sexuality that made him an international star and a darling of the fashion and entertainment worlds of the 1990s. If famous flamenco artists were gods, Joaquín Cortés would be Dionysus. In this show, the creatures falling at his feet were not supermodels like former girlfriend Naomi Campbell, but a trio of young women who writhed onto the stage towards him seemingly clothed in nothing more than huge, billowing skirts. They swirled the long, trailing fabric in the air with their legs as they lay on the floor, backs arched and arms reaching. The piece ended with the women arranged around Cortés in an architectural frame of fabric and flesh, before he exited upright and they slithered off stage. Unfortunately, the lighting was so dim and the sight lines so poor from the folding seats in the orchestra that the piece ended up being more frustrating than titillating. Cortés is known as a trendsetter who strives to breathe new life into a traditional art form by bringing in outside influences, but he is at his best when he settles into an old-fashioned flamenco groove, marking simple steps that show off his exquisite line or finishing off a complex footwork riff with a powerful but effortless remate. He also has a sense of humor, launching slyly into sight gags like the one in which he pulls his jacket in like a skirt, back to the audience, shaking his bootie and seeming to channel somebody’s gypsy grandmother from Jérez. Calling himself “el gitano universal,” the universal gypsy, Cortés has succeeded in bringing his brand of flamenco/contemporary dance to massive audiences worldwide. Mass appeal comes with a price, however, and no one can accuse this superstar of being overly subtle. Accompanied by his own group of fine musicians, in his long and impressive solo por bulerias each gesture, footwork section and glance at the audience seemed designed for maximum reaction. And when he wants applause, he simply marches to the apron of the stage and gestures for it; if it isn’t loud enough he puts a finger to his ear as if to say, “I can’t hear you.” Cortés has an extraordinary array of tricks up his sleeve which he pulls out in whirlwind fashion. His energy is unflagging, his charm disarming. Halfway through the bulerías, his shirt completely soaked, a woman’s voice from the audience yelled for him to take it off—a costume choice he made famous in his younger days. He responded by miming that he likes to eat too much and has developed a belly, so the shirt would have to stay on. Then he flashed his Tom Cruise grin and kept on dancing. Picture credit: Juan Fernando Ayora