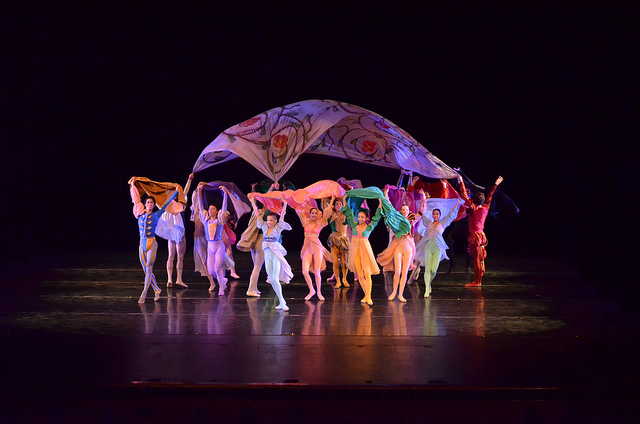 When audiences see the two pieces Vladimir Issaev has planned for his Arts Ballet Theatre of Florida’s Spring Gala, it won’t be the first time the company has presented these ballets. However, the artistic director believes each time he and his company breathe new life into them.

The traditional Spring Gala closes out the 2014-2015 season this weekend, and features Shostakovich Suites, a choreographic piece by Issaev, and Pentimento, a work by legendary Venezuelan choreographer Vicente Nebrada, with whom Issaev worked side by side for more than a decade. The company last performed the Suites to close its 2012 season, and Pentimento in its 2013 season.

“Not many companies in the world have the privilege to have one of Vicente’s pieces in its repertoire, so I wanted to continue the momentum. As for Shostakovich Suites, this is a neo-classical ballet that gives dancers the opportunity to showcase their technical abilities to the max,” explains Issaev.

The closing performance this weekend will mark the 18th year of Arts Ballet Theatre, which, Issaev says “started as a youth company and now has 20 professional dancers.” He lists what he believes are his company’s attributes — “good dancers that have salaries, a wide repertoire of classical, neo classical, and a complete season.” His goals for the company’s future? “To grow more … have the company travel in the United States, but outside of Florida, so that other audiences can enjoy us.”

Born in Siberia, Issaev began his dance studies at the age of 11. He went on to train in Moscow with Russian masters, who themselves were artistic prodigies of such luminaries as Agrippina Vaganova and Nicolai Tarazov. After immigrating to Venezuela, he found himself working as Ballet Master for the Ballet Metropolitano de Caracas, but soon was selected by legendary Venezuelan choreographer Vicente Nebrada to become Ballet Master at Ballet Nacional de Caracas, where Nebrada was artistic director.

Pairing Nebrada’s work with his own in Shostakovich Suites for his Spring Ballet Gala is what the artistic director calls a good balance. “Two different composers,” he explains. “One as classic as Bach and the other, the very modern Shostakovich, and both works represent its own era.”

Shostakovich Suites was created in 2004, spurred by an invitation from Prima Ballerina Altinay Asylmuratova, director of the Vaganova Ballet Academy/Kirov School of Ballet in St. Petersburg to stage a ballet for the graduating students who would be joining the Kirov Ballet Company. It gets its inspiration from Shostakovich himself, who Issaev says was a revolutionary in contemporary composition despite his suffering the brutal despotism toward talented artists during Stalin’s era. “With so much political pressure, he must have suffered so much, however, his music is so happy, showing the love for life,” says Issaev. “My choreographic work supports, or may reflect, the feeling of the music through its neo-classical movements. I think the music and my movements are the perfect match.”

He relies on his dancers to add to the interpretation. “Each dancer brings their own feelings and emotions along with their dancing abilities. Ramil Bagmanov and Lillian Hill interpret the adagio in a very dramatic way; Alexey Minkin dances with eight girls and has changed a bit what other dancers did in the past and is doing it brilliantly.” Issaev surmises that perhaps because Bagmanov and Minkin are Russian and were trained in the Russian Ballet system that they “subconsciously identify with the music and choreography.”

As for Pentimento, Issaev brings a personal quest to presenting Nebrada’s bold, abstract work. Based on an art form of painting called pentimento, the artist changes his or her mind about the composition of his painting during the process of painting, and then alters it. The ballet, which includes excerpts from Johann Sebastian Bach’s Four Suites for Orchestra, applies the same approach to dance — the concept for the dances and costumes change throughout the performance.

He emphasizes the importance of the dancer to a choreographer in addition to the music.

“It is so important to have a dancer that inspires you,” he says, using an example of when he created the Pas de Deux Endless for dancers Iliana Lopez and Franklin Gamero to perform with Arts Ballet. “I haven’t found another couple like them so that I can repeat the piece,” he says.