Che Malambo: Some Hard-Driving, Lasso Whipping Dance from the Pampas 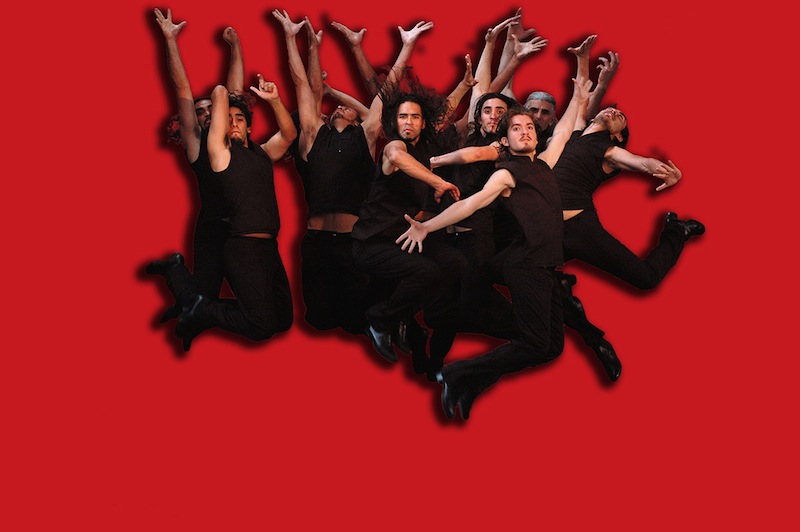 Trapped in a shoe store in Buenos Aires during an end-of-world hailstorm in 2001, I gritted it out as ice the size of ball bearings struck the steel roof like shotgun blasts.

Later that afternoon it seemed to me someone had shaped a dance from the Southern cone climate when, at a dinner theater in Recoleta, an Indian from Argentina’s pampas (plains) rhythmically pounded the stage floor with steel-hard, plum-sized rocks whirled on a lasso. Well over six feet tall, in the embroidered leather jacket, white shirt and tight black pants typical of the Argentine gaucho (cowboy), his PTSD-triggering performance introduced me to the folkloric dance rhythms known as the malambo.

Now, imagine the scene above multiplied by 14 as a line of nimble giants drum, stomp and shout rhythms from the stage like a bank of cannons tended by the machine gun tap of Gregory Hines and you have Che Malambo, the Argentine folkloric dance company on its way to South Florida this weekend.

As Gilles Brinas, the show’s director and choreographer, explained by email, Che Malambo takes its name from the malambo rhythm that first arrived in Argentina from Africa, where African rhythms mixed with the European dances introduced to the region by waves of immigrants from Italy, Spain and Germany in the late 19th century.

Like tornados spinning off from colliding weather fronts, certain dances emerged from all this blending – for one, the well-known tango and milonga, danced in the urban centers of Uruguay and Argentina. Outside the cities the malambo first took the form of a kind of fight between gauchos testing skills of speed, strength and dexterity. As Brinas explained: “The malambo was practiced as a kind of rhythmic duel. One performer danced a rhythmic sequence, which was taken up by the other who completed it before it was taken up again by the first who extended it even further.”

The malambo soon evolved to include its hallmark zapateo, fast-paced footwork inspired by the rhythm of galloping horses. Here dancers twist and rotate their legs, striking the floor with heels, toes, and both the inside and outside edges of the boot, their nearly disembodied legs twisting about like four foot salmon loose in the bottom of a boat. The dancers of Che Malambo initiate and pound out their rhythms accompanied by the bombo, a kind of drum particular to Northern Argentina. The dancers’ exaggerated upper backs arch, sternums thrust outward as they piece together elaborate tap-like sequences with a sound reminiscent of the Irish cloggers made popular by the Riverdance shows. Unlike those shows, Che Malambo is an all-male cast of dancers, the malambo with its gaucho origins being traditionally a male-only dance.

In addition to the zapateo, Che Malambo features the whirling boleadoras, a throwing weapon made up of intertwined cords and weighted with stones. As Brinas explained, the boleadoras were originally a weapon the first inhabitants of the vast Argentine plains used against one another. “They later served as a hunting weapon then, later still, they were adopted by folkloric dancers as a kind of percussion instrument.”

Luckily, we don’t need to brave today’s uncertain shifts of climate or make that eight-hour flight to the Southern Cone to be entranced by the malambo.