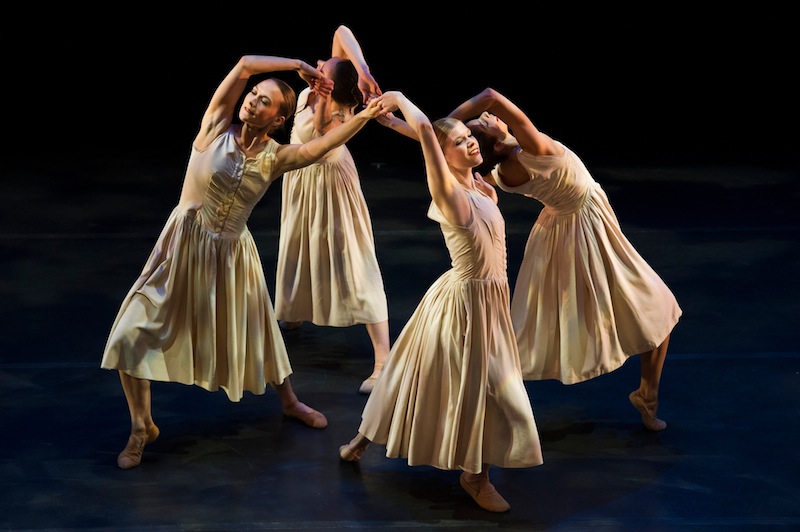 The Limón Dance Company celebrates its 70th anniversary this year, having existed more years without its founder than with him. The company’s survival is an homage to the man and his work. José Limón (1908-1972), a dancer and prolific choreographer, created many works that are considered masterpieces of modern dance; his company is a landmark in American dance, founded in 1946.

“Dance is a moment, and then it is finished,” Limón wrote. Capturing that moment, keeping his work alive, has been of upmost importance to the Limón Dance Company, who come to South Florida this weekend. “He was a master,” says Carla Maxwell, who was a member of the company and worked closely with Limón before becoming artistic director in 1978. “It was amazing working with José. You couldn’t not be marked by him, by his passion for dance; it was an extraordinary experience, learning-wise.”

“Mazurkas,” with music by Chopin, is a series of musical poems. Limón choreographed it after a visit to Poland, the country still devastated and in ruins after the World War II. Limón is said to have been in awe of the spirit of life displayed by the Polish people, especially in the rebuilding of their cities and the community. Limón dedicated “Mazurkas” “in honor of [Polish cities] Poznan, Wroclaw, Katowice and Warszawa.”

“The Moor’s Pavane,” set to a score by Baroque composer Henry Purcell, is Limón’s reinterpretation of Shakespeare’s Othello and considered by many to be his signature piece. Both the title and style of movement suggest the Renaissance court dance. “The Moor’s Pavane” is a dance of gestures and gravitas focusing on the relationships between the four dancers. It’s filled with graceful, statue-­‐like poses and unresolved tensions.

“The Winged” is a suite of dances inspired by different types of birds, both real and imagined. It was first performed without music — in silence. A score by Joh Magnussen was later added to the choreography. According to Maxwell, Limón said, “Man desires to fly; we fly in our dreams and in our imagination.”

It’s a testament to the deep admiration and respect so many hold for Limón and his work that the company’s 70th anniversary is being celebrated around the world. Many universities and dance companies are taking part in honoring the artist and his legacy. This includes Dance Now! Miami, South Florida’s renowned contemporary dance company. Miami is also privileged to have Daniel Lewis, a protégée of Limón and the founding Dean of Dance of the New World School of the Arts, hold a workshop on the Limón technique and collaborate with Dance Now! Miami in honoring Limón’s legacy.

Dance Now! approached Lewis, who authored a book on Limón’s dance technique, to conduct a technique class for the company. This developed into a workshop attended by professional dancers and students. It was a rare opportunity to take a class from a distinguished dancer, teacher and choreographer. Lewis also worked with Dance Now! to stage and choreograph a suite of dances in honor of Limón. Two of the duets are from larger pieces choreographed by Limón: “There is a Time” (1956) and “A Choreographic Offering” (1964). Lewis has worked with the company on a regular basis since February.

The result of this collaboration will be performed in March and April, led by Dance Now! Miami’s artist directors Diego Salterini and Hannah Baumgarten. “It was a honor,” Baumgarten says of working with Lewis on this project. She studied the Limón technique at Julliard, where Lewis and Limón once taught; members of the company are trained in the Limón technique, along with other modern dance forms, jazz and ballet “We were completely connected to the process,” says Baumgarten on working with Lewis. “The biggest challenge was letting go of the trappings of other [modern dance] styles.”

The program also includes a work by Salterini titled “The Things my Dreams are Made of.” Special guest Carolyn Dorfman will present (at Aventura ) “ODISEA” which examines the plight of Jews escaping persecution from Brazil in 1654; and “Keystone.” Dance Now! will present its tribute to José Limón’s 70th anniversary with performances at the Aventura Arts and Cultural Center, Little Haiti Cultural Complex, and Miami-Dade County Auditorium.

When asked why he thought the work of Limón has survived for 70 years, Lewis replied, “He was a genius… he choreographed works that would last… José will live on.”