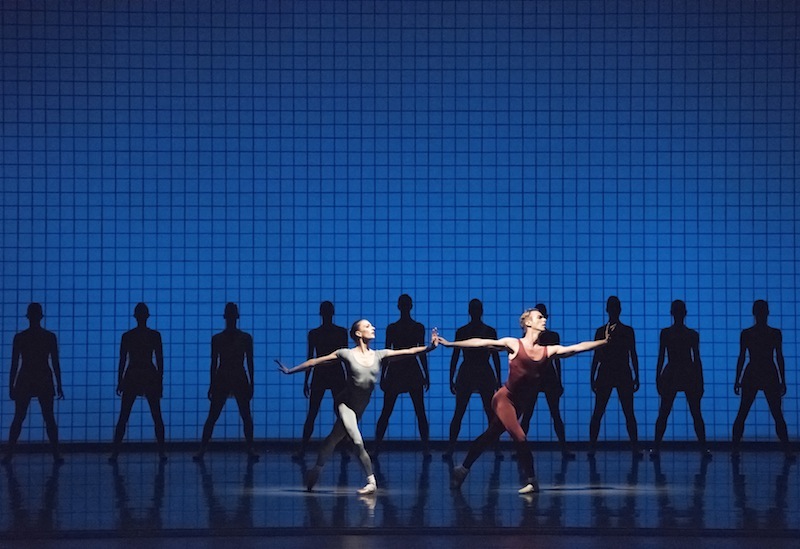 The future came a long time ago. That impression arose in two forward-pointing yet decades-old company premieres on Miami City Ballet’s second program of the season. In the opening performance at the Adrienne Arsht Center for the Performing Arts, Peter Martins’ “Calcium Light Night” from 1977 and Jerome Robbins’ “Glass Pieces” from 1983 carried the weight of dance history while keeping current value.

Barbed and tightly coiled, “Calcium” seems to move at the speed of impulse yet reveals an exquisitely timed mechanism.This duet introduced Martins, now New York City Ballet’s artistic director, as a promising choreographer.Yet—rocketing over neoclassicism—it remains an anomaly in his repertoire.The unorthodox rhythms and tonalities in the Charles Ives score, boisterous or eerie by turns, inspired in Martins an arch creativity.

“Calcium” unfolded in a center-stage square of unforgiving illumination.The unitards—blue for the man, red for the woman—against the black depth of the stage suggested color field paintings that sprouted arms and legs.In solos first and finally matched up, Kleber Rebello and then Nathalia Arja showed plenty of spunk and spring.He applied his knack for playing divine jesters, and she—whether echoing his moves or going on pointe on her own unabashed mission— was kittenish, teasing us with glimpses of a prowling tigress. These dancers turned focused progressions into a high-wire act.

In its incremental moves and sweeping repetitions, “Glass Pieces” provided a visually engaging response—influenced by postmodern dance—to the reiterative measures of three Philip Glass compositions. But, coming from the dawn of our electronic era, it also seemed to anticipate today’s world of ubiquitous screens.

“Rubric,” the first segment, featured a grid-pattern backdrop that loomed over lines of crisscrossing dancers, in contrast to three couples (Renan Cerdeiro and Tricia Albertson; Jovani Furlan and Callie Manning; Chase Swatosh and Jordan-Elizabeth Long) moving in spirited classical moves. “Façades” framed a stream of bobbing figures silhouetted by a blue-grey, LCD-like light; while in front of them Simone Messmer and Rainer Krenstetter projected solemnity like celebrants in a temple.“Akhnaten,” a pounding march, brightened the stage with advancing sextets of men before the full ensemble flooded in, earlier cool calculations giving way to a primeval force.

The true heart of this program lay in Balanchine’s “Serenade,” where the mathematics of formations still astonish. Albertson, a refined ballerina, favored subtle interpretation, floating on the Tchaikovsky score in her journey from initiate to icon, partnered adroitly by Reyneris Reyes.Emily Bromberg was at her beguiling best as a mysteriousguide for Didier Bramaz.And Jeanette Delgado carried the light of all-out classicism.Throughout, Gary Sheldon’s baton kept the orchestra on pace in a very demanding range of music.

Feb.4-5 at the Broward Center for the Performing Arts; www.miamicityballet.org.