‘BrookDale’ a Surreal Dance Through Mental and Physical Imprisonment 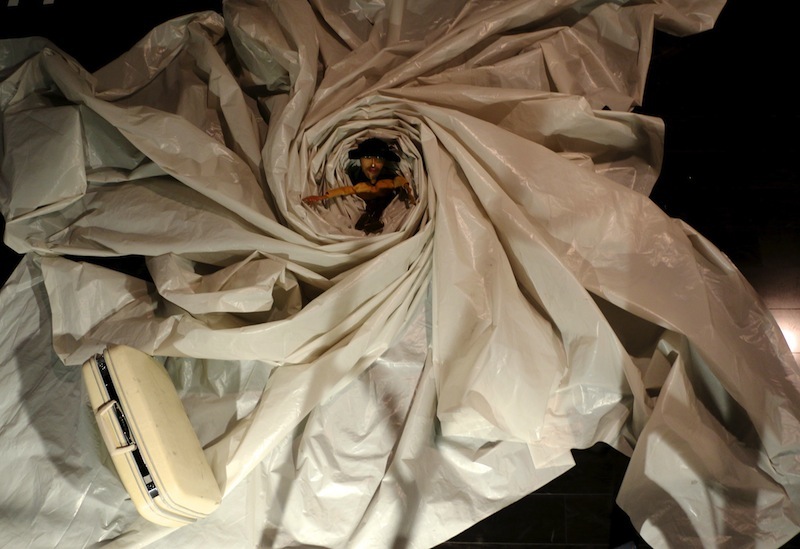 Imagine, it’s February 7, 2013, and you’re leaving Miami after a month-long visit with family and friends, resuming your dance career in Israel. At MIA, TSA agents repeatedly search and interrogate you, causing you to miss your connection. Why? Maybe it’s because of your Cuban passport and the many visas that mark your touring schedule. No one tells you.

These were the circumstances that began dancer/choreographer Lazaro Godoy’s cascade of frightening misadventures that inspired his solo dance performance, BrookDale, which premiered at Miami Theater Center’s SandBox stage on June 10 and plays Fridays and Saturdays through the June 25.

A graduate of Miami’s New World School of the Arts and Juilliard, Godoy has resided in Europe and Israel, but two years ago, he and partner Carlotta Pradera co-produced and performed the raw and provocative Bare Bones – also at the SandBox. More recent local presentations include Harmonicum Accordion for Miami Light Project and Medaka, a Tigertail commissioned dance.

Godoy’s harsh treatment at MIA provoked a physical and mental breakdown that plunged him into Brookdale Hospital’s emergency room upon his connecting flight’s eventual arrival in New York. Disoriented, and reacting badly to an IV, he yanked it from his rapidly swelling arm. “They relocated me to the psychiatric ward, because they believed I was a danger to myself or others,” wrote Godoy in an introduction to his work. “They put me in small room with only a mattress on the floor. From there they administered a tranquilizer without my permission, closed me in a small room without a toilet and left me alone.”

Godoy’s ordeal provides the core narrative of BrookDale, and he immediately plunges audience members into the drama. Opening the storefront theater’s door, a “flight attendant” directs us into a narrow hallway, where a “TSA agent” demands that we place our personal items into plastic bags and pass through a “scanner.” We proceed into a square, dimly lit space, draped with plastic sheeting and filled with penetrating engine noises and other oppressive sound effects. There, we wait, as spectators are slowly led to their seats by the robotic, flashlight-wielding “hostess,” who sometimes separates couples. Nervous energy pervades, and the slender figure of the “traveler” finally enters the stark space, bearing a suitcase and evoking Charlie Chaplin’s beleaguered Little Tramp. Assailed by unseen forces, he jitterily runs and waits and runs. By implication, he invokes the fear and oppression endured by citizens of Cuba and many other parts of the world.

To create the piece, Godoy needed sufficient separation and healing “to be able to express what my body has as a message from these experiences.” Only then, “I could laugh about it and really celebrate life and what it is to be free,” he said. “It’s still surreal to me.”

That surreal quality is effectively translated in both the dancer’s tangles with his own body and the ubiquitous plastic sheeting that entwines and nearly smothers him.

In the second half of the performance, the protagonist “loses his suitcase and finds himself in another place that is completely restricted, and there’s no freedom whatever,” summarized Godoy. He does manage to extract a diminutive puppet from his suitcase, which serves as a tender “mini-me” companion in a sensuous Latin dance duet.

During a subsequent grueling, sweaty, anguished interlude, Godoy occupies a platform that serves as both his hospital bed and isolation chamber. He writhes and leaps about amid the twisted sheets. A punishing struggle ensues, and Hazmat-clad orderlies strip and cruelly confine their captive.

Godoy originally reacted to his detention by entering dream-like states and sound memories “that connected me to something real.” Later, he collaborated with fellow Cuban artist Eligio Omni to produce video, which conveys his virtual escape through family portraits and alluring landscapes of Israel and Cuba, projected on the wall. “It was sort of what held me together – those memories and visuals,” said Godoy.

“The best therapy for post traumatic stress is dance movement and sound,” he continued. “My body can heal by constantly visiting those places and thoughts and working with them and feel them and not to be afraid and allow them to enter me and come out.”

The artist’s focus is not political, “but I cannot avoid it,” he remarked, “because we are all politics – our bodies, the landscape, where we come from, where we’re going.” His goal is to inspire “a bit more compassion.” That compassion is hard-won.