A noisy wet greeting from pitbull chihuahua, Finny, ushers me into the Little Havana studio of choreographer Brigid Baker, artistic director of brigid baker wholeproject. Company dancers Amy Trieger, Meredith Barton and Isaiah Gonzalez warm up in the center of the floor for the afternoon rehearsal of the company’s latest work, “Abracadabra.”

Stage props from earlier installments of the four-part “Return of the Bird Tribes” series frame the practice floor.  On one side is the cardboard tree from the 2022 program, “Numinous Land,” and against the wall the great golden crown from the 2021 pandemic work, “Crown.”

For Baker, the RBT series began with the October 2019 program, “Remain in Light.” She says that program shifted her creative energies. 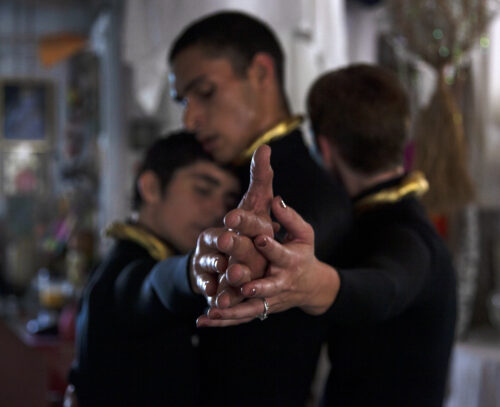 “It all goes back to “Remain in Light” whose theme was the ocean, but at that point the direction had not really emerged,” says Baker.

“(These four works) are all about pure energy and about what comes from the physical world,” she explains.  ” ‘Crown’ laid down the geometry of these new possibilities for the new beginning we were making then we go through the different physical representations on earth.  First was ‘Operation Birdsong’ where we had to attend to the things of the air and then there was ‘Numinous Land’ where we were attending to things of the earth.”

“The stage will be all gold without embellishment.  The idea is to express a vibration,” says Baker.  “We’re becoming aware of the emergence of energetic values that are becoming manifest.”

Baker wearing a loose fitting shirt and sweater engages in the interview as she pins in place a golden collar on Barton.

” ‘Abracadabra’ opens with one of my hack movies with people making gold orbs,” said Baker referring to her crowd-sourced films spliced together from YouTube movies. “And then it transitions to women from the ’50s making globes and then spiders going ’round and ’round making webs.”

Musician and composer Brian Eno’s subdued 2005 composition, “And then so clear” accompanies Baker’s visuals.  The piece starts quietly with chords then an electronic voice breaks in, “In these the world to open/so much to lose to save.”

The three dancers move to the center of the floor sporting full-body tights and gold collars.   Behind them, a tall draped golden figure casts golden shadows on the black studio floor as the dancers center themselves and Baker cues up the music. 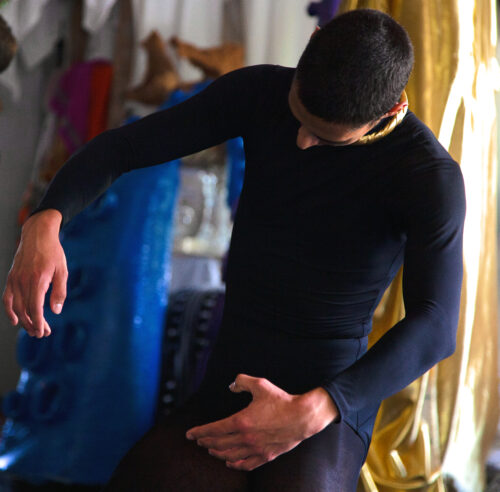 The centerpiece of “Abracadabra” is a 24-minute dance piece of the same name set to Eno’s just-released work, “We Let It In.”

The dancers begin and their movements are striking, patterns transforming unexpectedly. In one sequence, Trieger stretches back then steps to Gonzalez’s side before pivoting to face him in a lunge as they both hop forward.  Gonzalez supports her in a quick lift in arabesque before they run the length of the floor. To their right, Barton snaps back in arabesque, hops forward twice then spins.

The choreography shifts rapidly from the flamboyant to the introspective.   In one sequence, dancers leap into the air, arms fully extended, legs snapping out at right angles.  In another, dancers waltz as a trio before shrinking into a sculpture-like twist at the center.

Throughout the choreography, the three dancers exhibit astonishing unity of technique.

The program also includes a gorgeous set of visuals with a film by Justin Trieger, New World Symphony’s multimedia producer and husband of dancer Amy Trieger,  which will be projected on the screen during the main dance number.

The film begins with black and white digitally produced orbs that float like stars in space after the Big Bang.  With a sudden crash, the scene shatters with movement and the color spectrum shifts to shades of gold.

Near the end of the dance number, three dancers form a diagonal, feet in first position, arms at their sides gently curved, gaze intent.

They raise a hand to their shoulders and then extend it out in front as the music closes. 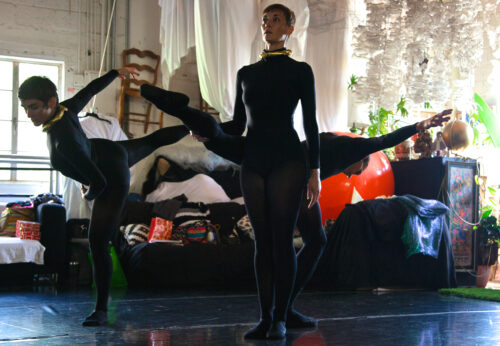 Each of the dancers has performed with wholeproject for several seasons.  Gonzalez joined the company in 2019 and Barton in 2014.

For Amy Trieger – who joined the company in 2005 – “Abracadabra” will be her 20th program danced with the company.

When asked what she hoped the audience would take away from the program, she says:

“There are things about the way that we work that people don’t understand because we are so calm or what appears to be calm.  They don’t know all the back work that goes into it.  I want them to sit there and be there with us because that would open their hearts.  Then after that, I would love to sit there and have a conversation and talk about how we got there.”

WHAT: brigid baker wholeproject,“Abracadabra, Part 4, a Return of the Bird Tribes Interlude”

COST: $22 plus fees, general seating only.