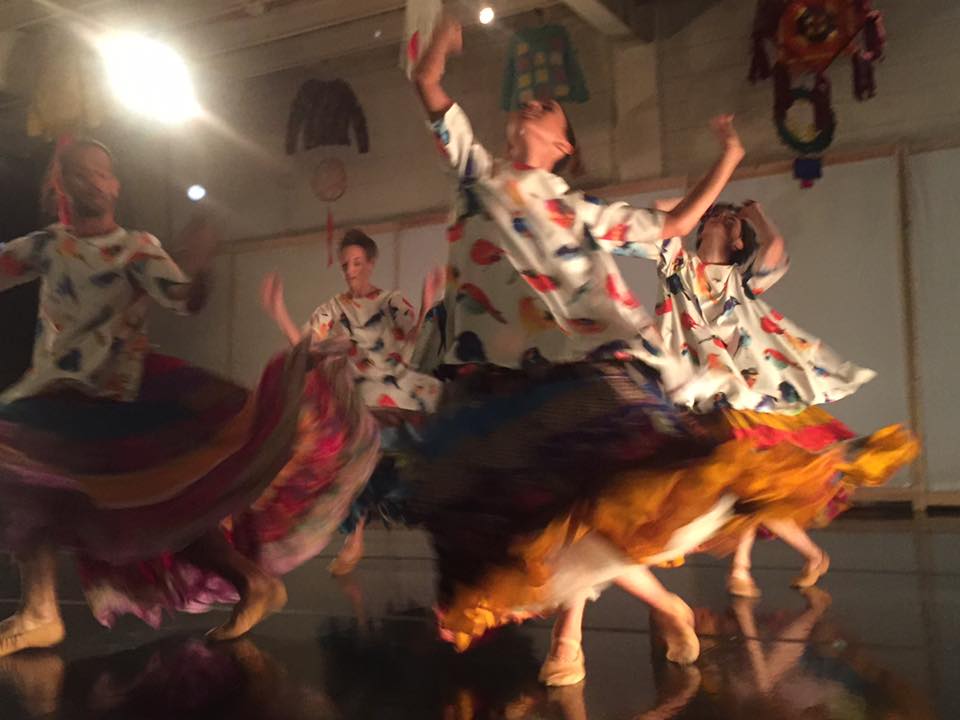 From her home base at 6th Street Dance Studio in Little Havana, longtime Miami dance figure Brigid Baker has been slowly crafting a new performance piece. It’s not conceptual or political like contemporary dance tends to be. Instead, it is elegant in its simplicity.

This piece, “Big Beautiful” debuted in March over the course of ten days. Because it was staged in her dance studio, the feel was intimate. Just a handful of people fit into the audience on any given night.

In keeping with Baker’s unabashedly unique personality, “Big Beautiful” seems to be built from an eccentric template for dance. The result is an unusually refreshing experience. Those who missed it the first time around are in luck: “Big Beautiful” will be restaged this month, again at 6th Street Dance Studio, from May 10th-14th.

We spoke to Baker recently to learn more about her ideas of dance, and the process that led her to create such a singular creative piece.

How long have you been in Miami, working with dance and choreography?

I came to Miami in ‘93. I stayed for a few years and then went back to New York. I worked in Europe also. And I returned in 2001 just before the towers fell in New York.

When did you last choreograph something?

I work all the time. The difference with Big Beautiful is we decided to be in an open-ended rehearsal period to see if there was no pressure to complete, if there was no date or anything set for a performance, what would happen. So what was intriguing is it took us a year. It came in right on the tail of another piece. The last piece I did was a year ago and I started working on Big Beautiful immediately and here we are a year later.

With the open-ended rehearsals, did you also have an open-ended process?

I do a process that has come to be called Lightbody. It’s a deep process that deals with treatment of energy and building new neural pathways. It relates to gravity in a specific way. So this process was something that has taken many years to build and in the building of it, it creates a new and different kind of dancer. So as we built it, the process then got deeper and deeper and was creating a new embodied language.

And you also use spinning, like the Sufi Whirling Dervishes, right?

Yes in Lightbody, we spin. I studied a lot of alternative practices. When I left New York for the mountains after the AIDS crisis. Which changed all of us if we let it. And after that time I went very deeply into spiritual practices that would bring it into the body in a different way. So we do spin. We utilize anything that has to do with physicalizing in a different way.

Do you consider that the audience is changed or healed by watching the piece?

Indeed. First of all, the audience to me is the missing link. The work is not completed until it is exchanged. The piece is built in the space between the choreographer and the dancers. Then the piece is completed in the space between the dancers and the audience. And yeah, everyone is changed by it. What happens is when you are working with the nervous system in a specific way, is that you’re not just looking at something. Your synapses are also firing as if you yourself were performing.

What are the themes of “Big Beautiful?”

The piece that preceded it was called “Wonderlawn.” That piece took me 30-something years to create. It had everything to do with the loss of people and community and just everything during the AIDS crisis. It took a very long time to understand how the world had changed and what was happening. After completing that piece, then “Big Beautiful” emerged.

In nature, I find complete reason and solace and spirit and source and optimism and clarity. So for me it is very easy to use that as a guiding principle. The dancers seem to me like the tenderness of humanity and how small we are in the scheme of things and how big at the same time. So in that invariably there enters a stream of folk dancing, which is passed down forever. The idea of making circles and spirals within spirals. The piece is built as a walk through a kind of vortex. And in the last section, you are freed and open to be united with all that is.

Contemporary dance often communicates or demonstrates pain. This is not the case in “Big Beautiful.”

Everyone’s talking about that. It’s hard. When I go to see things now, everyone is talking about this particular moment. But that is not my moment. The moment I’m having is one of resurrection. Although I see there are many timelines we are involved in. And I see the beauty and purpose of all the different timelines.

It seems like the pacing and repetition of “Big Beautiful” allows the audience to go into a meditative state.

I think one of the differences with Lightbody is instead of the vibrational pitch going outside, Lightbody brings the larger self into the body. So the geometry is set up within the piece to help bring more of you into yourself. You feel human and happy. If meditation were circling in one direction, Lightbody is circling in the other. One is pulling you out of the body and the other is pulling you in.

Do you consider yourself a courageous person?

Yes, I think the most important spiritual principle to have on this earth is the kindness of the heart. And the very next thing is courage. I think you have to have courage. And I think I am courageous, yes. In order to keep going in, and to have perseverance and persistence.