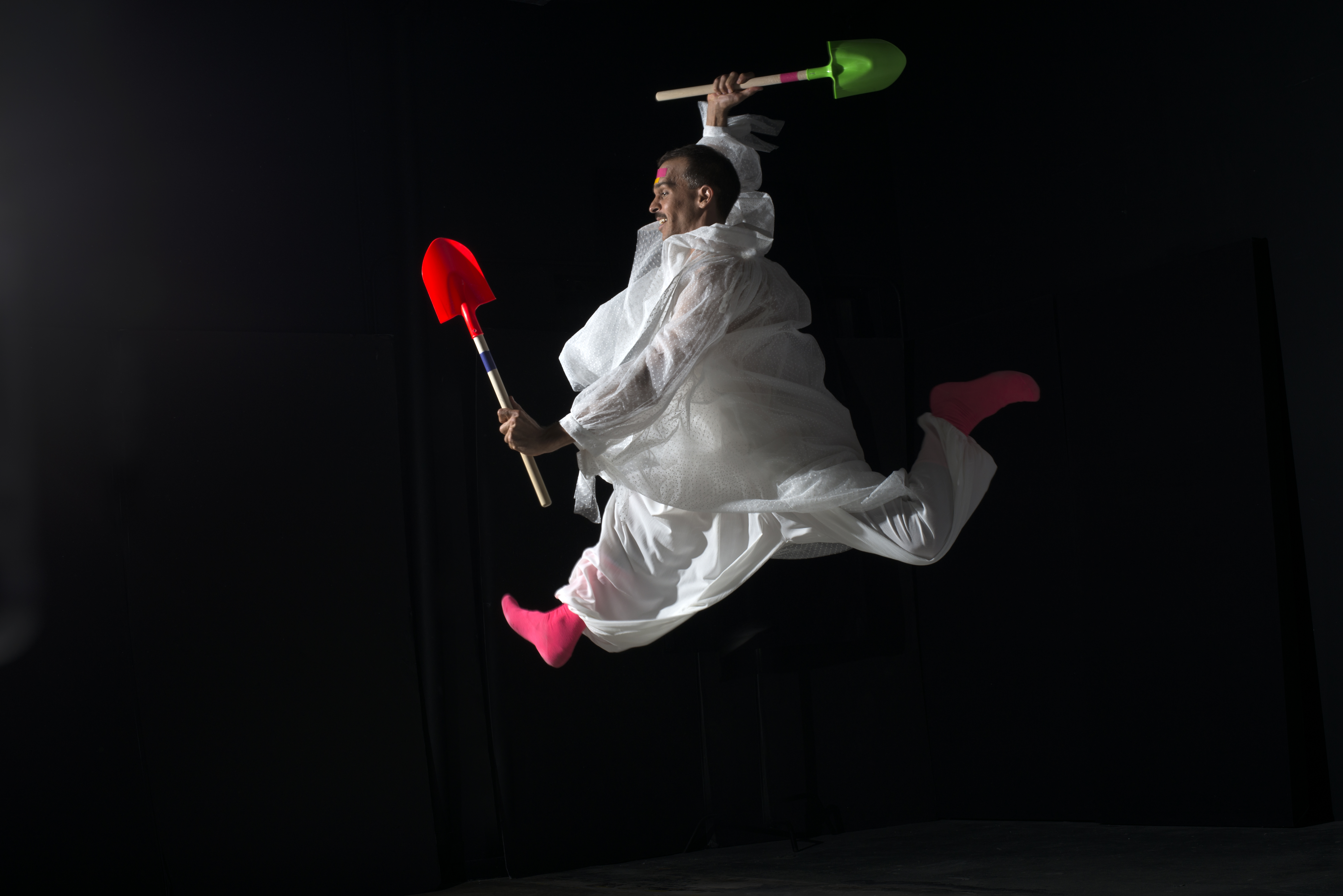 The vibe of a dance company a week before a performance can range from strained to shell-shocked. But entering the Little Havana studio of progressive contemporary dance company brigid baker wholeproject, one feels they’ve walked through the wardrobe into the land of the tranquil and buoyant.

They are rehearsing for “Remain in Light,” the company’s newest work, which will be presented in four performances from Oct. 31 to Nov. 3 at Miami-Dade County Auditorium’s On.Stage Black Box Theatre.

The piano lays down arpeggios as dancers oozing confidence frame effortless sequences of classical pirouettes, brisées and chainées without hammering their bodies to do so.

At the start of each new sequence, dancer, choreographer, and costume designer Brigid Baker cautions the dancers to “be normal” even as, at 62, she snaps down into splits and bends to her left, rolling out a leg as she traces a line from her hip bone to her sternum. Hair in a tight bun bound with a green sash, draped in a striped shirt and loose-fitting practice slacks, Baker gives off the air of sylph with just a splash of Yoda.

Her explanations are precise and, within moments, the entire group has hit the pose. It’s easy to infer that this former student of Pina Bausch, David Howard and Maggie Black could easily have made Manhattan or Berlin her home.

Baker explains that Lightbody principles underpin her approach to dance technique and to life. She developed a Lightbody technique to synchronize the breath with the body’s most complicated movements. Relying on our connection to the earth’s system of lines, Baker’s choreographies spring from how body and nature form a continuum.

Teeming with sets and costumes crafted from repurposed materials, the company’s second-floor 6th Street Dance Studio can activate anyone’s inner 10-year-old. Strung from the ceiling, columns of clear plastic bottles catch the sun like crystal stalactites. A happy riot of fuzzy sweaters and dream catchers made of yarns the colors of 120-count box Crayolas line the side wall. Six-foot-high neon tentacles reach up from the dance floor like a kraken breaking in through the ground-floor shops.

At one point, Baker takes a moment to explain how the emergence of AIDS in New York’s creative community affected her life path.

“AIDS came, and you’re 23, and people are dying all over the place. People are disappearing from the community of radicals and freaks,” she says.

Baker found herself “rehearsing, going to funerals, performing, and going to a hospital on the same day.” That experience prompted Baker “to follow spirit without hesitation.” 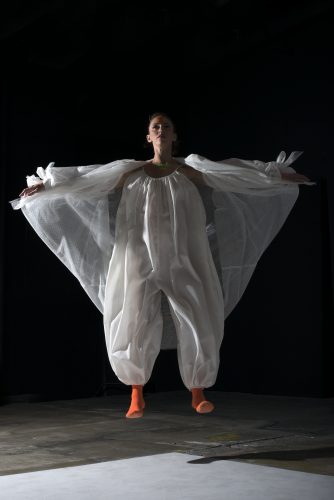 Juliana Trivino is a dancer in the brigid baker wholeproject. (Photo courtesy of Oui Collective)

And spirit brought her to Miami’s Little Havana. The principles informing her practice developed slowly, throughout 35 years, as a response to the shock of AIDS that culminated in last season’s works, “Wonderlawn ” and “Big Beautiful.” Both pieces presented the natural world in continuous dance-like movement.

Baker’s new work, “Remain in Light,” carries forward the theme of nature, this time with the sea as focus. It includes eye-popping, tongue-in-cheek visuals by Justin Trieger, New World Symphony’s director of new media. In one, Frank Sinatra serenades a purplish blanket octopus unfurling in black. In another, Bob Dylan croons Frank Sinatra’s “Some Enchanted Evening” as an octopus expands against a sapphire ocean.

Company dancers Meredith Barton, Isaiah Gonzalez, Nadina Liberatore, Amy Trieger and Juliana Trivino prepare to rehearse “Born Under Punches,” the first of four works from the new program set to the same titled music by the Talking Heads. They fit on parchment white robes designed by Baker that catch at the shoulders then fall like the sculpted fabrics on copies of Praxiteles.

As the vocals and percussion lay out some textured funk, the group snaps out a series of feints and shifts of weight, fingers, wrists and upper arms riding the air. They circle the room then cross on the diagonal, half-skipping, half-running, timing steps to the music’s syncopations. Their movements cascade like a deck of cards being riffled by a croupier. Their speed and group timing are awesome.

As the piece ends, the dancers prepare for the next, fitting on orange crowns crafted from mop heads. Baker turns with a smile and sums up the work: “I want you to fall in love with life. I want people to be as fortunate as I am and feel the gift of it all.”

When: Oct. 31 to Nov. 3; all shows begin at 8 p.m. but aim to arrive well before that, since the evening begins with a pre-performance number featuring music by Soundwalk Collective Patti Smith and the chanting of Kurdish holy man, Sheikh Ibrahim.