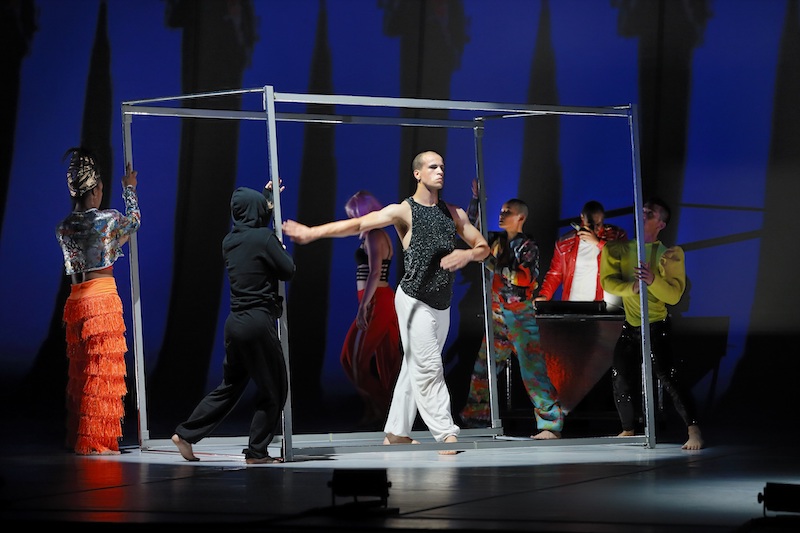 Due to winter storms in the Northeast impacting travel, with great regrets the Bill T. Jones/Arnie Zane Company announced the cancellation of the Saturday, Jan. 6 performance.

At age 65, choreographer Bill T. Jones speaks about dance with both intellectual curiosity and the confidence of experience. Since his beginning in New York’s experimental 1970s dance scene, he has earned a place in the high tiers of dance history. Now, as a mature artist with a full resumé, he is in position to look back not only at his own career but also the shape a life might take, any life, and how to tell it.

On Saturday, Bill T. Jones/Arnie Zane Company brings a new work, “Lance: Pretty aka The Escape Artist,” to Miami’s Arsht Center.
“Lance” is an evening length work from Jones’ latest project, the Analogy Trilogy. Each part of the trilogy tells the story of one individual, each from a different time and place. Two are based on people from his family circle and the third portrays a fictional character from German writer W. G. Sebald’s The Emigrants, the 1992 novel that originally inspired the project.
The Emigrants is, in essence, a fictional oral history told through multiple peoples’ viewpoints and a series of unlabeled photographs. As Jones describes it: “a young narrator is in search of his uncle, and he’s interrogating family members. So he might as well be doing a kind of biography within the novel, trying to get to the truth of his uncle’s life.”
The novel sparked Jones’ interest in portraying lived experience from multiple angles. “I was thinking more and more about my attraction to literary construction and the voice of a novel, the sense of time in a novel, sense of place and so on and so forth,” says Jones. “I had done an oral history with Dora Amelan, who is my mother-in-law, my husband’s mother, maybe 15 to 16 years ago.” The stories he gathered from Amelan, a French Jewish woman who had worked in an internment camp, were incorporated into Jones’ trilogy as a piece titled “Dora.”
“The way the oral history rolled out was fascinating to me, particularly when I gave the voices to various members of my company. So we were embodying through multiple bodies the character of Dora, this 80-plus year old French Jewish woman.” Jones as the interviewer was a second character.
The idea carried over for “Lance: Pretty aka The Escape Artist,”—the piece from the trilogy that will show in Miami.
“I liked so much the feeling of embodying an oral history that I took the same technique when I was dealing with my nephew, Lance Theodore Briggs, who was very ill at that time,” he says. Lance was a performer in the ‘90s club scene who faced drug addiction, prostitution, AIDS, paraplegia and debilitating illness that threatened to take his life at an early age.
“We thought he might be dying so we were trying to get him in his own words to state his life in the way that Dora had stated her life.”
Using multiple modes of storytelling, from movement to text and sound, music and vocal expression, Jones has created an experience that surrounds us and into which we cannot help but enter.
Working in such an immersive style, Jones has by necessity been reshaping and refining his ensemble.
For “Lance,” set in the 1990s gay club scene, his ballet and modern-trained dancers had to incorporate urban dance styles into their performances. For some of them, he says, “urban dance is their social dance. I would ask them to bring those vocabularies into the process of a piece like ‘Lance.’ And everyone had to learn them.”
He also needed to work out how his female dancers could fit into the male homoerotic environment. “In some ways the women had to be translated into androgynous figures,” he says. “Or if we’re talking about eroticism, sexuality between people, what is it like when a duet is performed by a man and a woman, by two men, or two women?”
The effect is to humanize Lance’s story. We are invited to relate to him with full-spectrum empathy. And, Jones says, in the trilogy we are meant to feel the lives of each of the three characters—it is not delivering a message, but instead, an experience.
“The audience has to be relaxed enough to allow their imagination to make associations,” says Jones, “and to have their heart open enough to be able to see that there is a relationship between what’s being told about a Jewish woman in 1940, an African American gay man in 1996 in New York who has a drug problem, and a novelistic character from the third section who is born in about 1880 and comes to New York in 1911 and dies somewhere in the 1950s in a sanitarium in upstate New York. So the audience has to be quick on their feet, and they have to have a real appetite for making connections.”
Bill T. Jones/Arnie Zane Company “Analogy/Lance: Pretty aka The Escape Artist,” Sat., Jan. 6, at 8:00 p.m.; Ziff Ballet Opera House, Arsht Center for the Performing Arts 1300 Biscayne Blvd., Miami; tickets: $30-$75; www.arshtcenter.org.