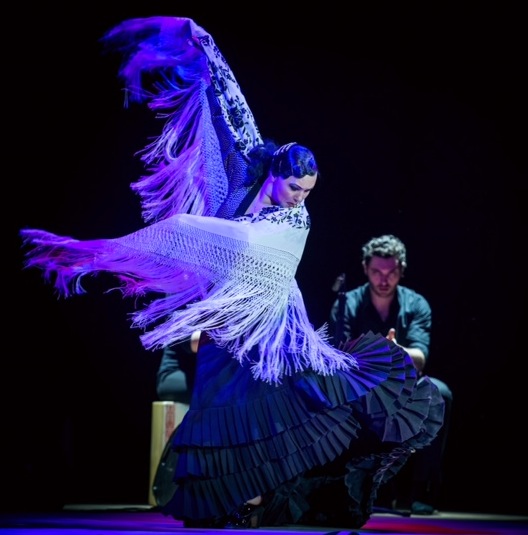 Ilisa Rosal founded Ballet Flamenco La Rosa in 1985 and the company soon cultivated a renowned reputation for presenting flamenco, in all its forms, to local, national and international audiences. This weekend it will premiere “La Gaviota,” a flamenco ballet, and “Al Grano,” a program of pure flamenco that showcases the talent of artists from Spain, Latin America, Russia and the United States, at the Colony Theatre in South Beach.

Flamenco, performed at this level, was rarely seen in Miami before Rosal established her company. The cultural landscape has exploded since the 1980s, and Ballet Flamenco La Rosa has been at the forefront of this growth.

Rosal studied flamenco with some of the most distinguished artists and teachers in Spain. “I have a passion for flamenco, and for theater, which has only grown throughout the years,” says Rosal. Ballet Flamenco La Rosa has long taken an innovative approach to the art form.

In the past, Rosal has presented narrative programs (linking dance with drama) inspired by such works as Strindberg’s Miss Julie, and The Father. “La Gaviota” is inspired by Chekhov’s The Seagull, and is one of three plays (Uncle Vanya and The Cherry Orchard are the other two) Rosal considered for adaptation to the stage. She explains that she based her choice on her love of the play and because “the image of the seagull is well suited to flamenco.”

The play is set in the Russian countryside and is a dramatization of the conflicted relationships between the main characters. One of the challenges in presenting the play was “distilling it to the most important conflicts and characters,” says Rosal. Another obstacle was logistics — since “La Gaviota” is an international collaboration. “We created music by Skype,” explains Rosal. Among the artists performing this weekend are Israel Heredia, a guitarist and composer from Sacromonte, Spain who hails from a long line of flamenco artists; Elroy Aguilar, a dancer and choreographer who has performed with major flamenco companies throughout the world; and Svetlana Savelyeva, who was born in Russia and is a dancer and choreographer. She began flamenco at 19 and decided then that it would be her profession. All three have their own style and artistic temperament, which they bring to this weekend’s performance.

Flamenco seems to draw in people of all ages and ethnicity; it originated in Andalusia, Spain, and was later adapted by Christians and Jews. “Flamenco is multicultural – there are elements of different cultures,” says Rosal on the appeal of flamenco. “ It’s the rhythm in flamenco – the deep emotion in the guitar, music and the dancer. It resonates with all people – and it’s very universal; it’s a complete art form.”