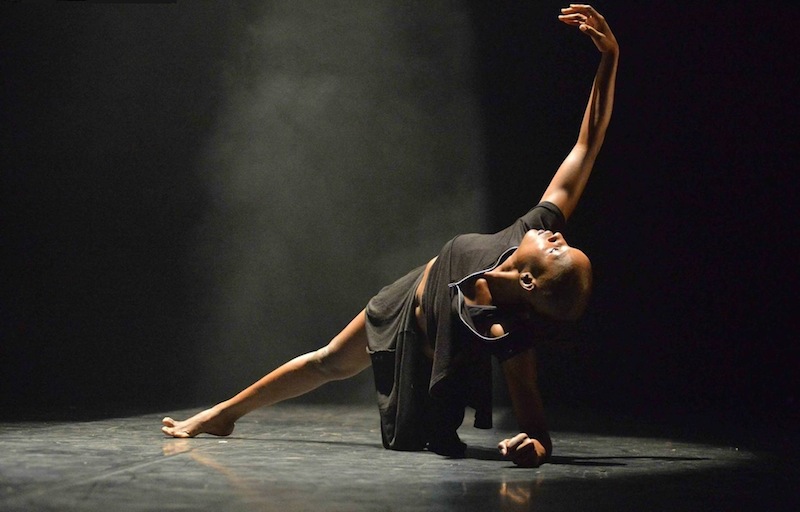 Choreographer Jeanguy Saintus works primarily from Port-au-Prince, Haiti, but his creative work has global appeal. He is a pioneering artist who blends Haiti’s traditional music and dance alongside more contemporary styles of movement and music. He isn’t afraid to throw in some Tchaikovsky or Ravel.

His company Ayikodans annually premieres new work at the Arsht Center for the Performing Arts, and Miami has become a kind of home base for the company. This year, their sixth season in Miami, Ayikodans returns with two new world premieres, Rencontres and Initiation.

Jumping into the political conversation about gay rights, Rencontres is inspired by struggles he observed in Haiti. It features a male duet plus a solo piece by emerging choreographer Johnnoiry Saint Philippe. The other, Initiation, is a creative take on a vodoun initiation with Ogun, the god of iron and fire.

We spoke with Saintus as he was preparing for the company’s trip to Miami, to learn more about his perspective on the art and politics of the moment.

Yes, we came back from two trips recently. We went to Sweden for a dance exchange on how we work as contemporary choreographers, using inspiration from the traditional dances and the reality of Haiti. And also we went to French Guyana for a dance festival they’ve been organizing for the past 20 years.

What is your creative edge right now?

My artistic development is based on all the things I’m seeing and experiencing in my everyday life. Last week, I was thinking about everything happening in the United States. The U.S. is super powerful for everybody in the world. And for us in Haiti, even though we used to be a French colony, the United States is an example. Sometimes you live the American dream even in Port-au-Prince. That’s why you have all those Haitians in Miami and everywhere.

As an artist, it’s natural to respond to current events.

I think my work will always be somehow political. Like Rencontres. Three or four months ago, a festival was planned to talk about gay pride. I was kind of shocked to see how people reacted, they had to cancel the festival. People were talking about gay pride, we are not ready, let them do this in their country, Haiti is not ready. And people are starving on the street, kids cannot go to school. It would be lovely if the politicians could invest in having all these kids going to school instead of paying attention to others’ private lives. So Rencontres was inspired in part by this. When you put the duet with two men on stage, coming from a country like Haiti or now in the United States of America, it will be political.

How do you see your role as an artist?

What I’ve been doing for the past 30 years, [is] trying to change people’s lives. The ones who don’t have access to dance, I try to go to them through my dance project Danspyenu, telling the young dancers or young artists approaching me, you have the right to dream and miracles are still possible.

I know that I cannot change the world. I am not very powerful and I don’t have the money to do it. You also become realistic. But I will still try to play my role and fight as a dance activist.