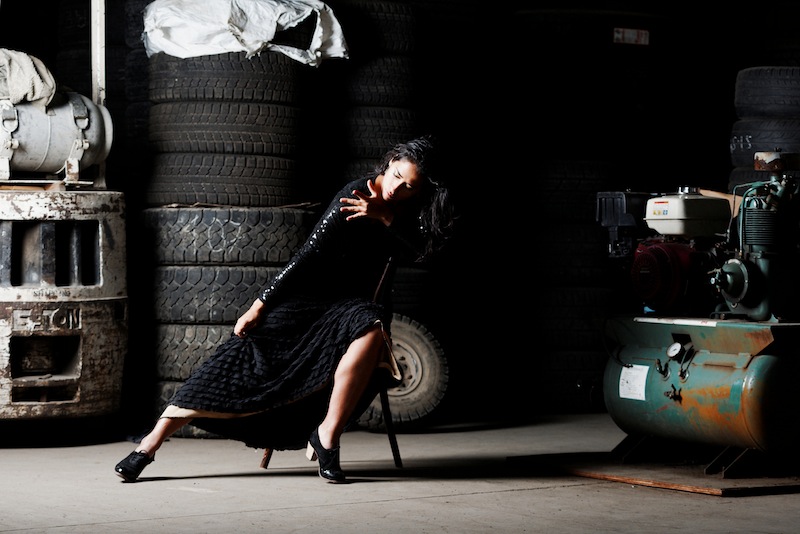 “Precise” doesn’t begin to describe up-and-coming flamenco sensation Karen Lugo’s dancing. Every line and pose that she strikes seem as carefully calibrated as the inner mechanisms of a Philippe Patek watch. Every arch of the back, every turn of the wrist appears set to the centimeter, each posture carefully considered and fully embraced, even if only for a millisecond.

This precision will be on stage for Miami to see when Lugo, 29, performs at the Miami-Dade County Auditorium on Sunday, November 8 as part of FUNDarte’s No Borders series. Direct from performances at Madrid’s famed Casa Patas, she will present her new concert length work Flamenco Frequencies with male dancer Ricardo Moro, guitarist José Manuel León, percussionist Miguel Hiroshi and singers El Trini and Alicia Carrasco.

It certainly doesn’t hurt that Lugo looks the part of the quintessential female flamenco dancer. With her exquisite neck, long limbs and black eyes, she could easily have stepped out of a Julio Romero de Torres painting from the 1920s, a prototypical Andalusian beauty. That she is actually not Spanish, but rather Mexican, only adds to her exotic allure. The noted choreographer Javier Latorre, with whom she worked in the Carlos Saura film Flamenco, Flamenco, once said of her: “She has all of the volcanic power of her native land, the necessary force to cross the planet in search of what she most desires. She’s Mexican and she’s the most ‘flamenca’ of any artist in the world.”

This will be Lugo’s first appearance in South Florida, an increasingly important hub in the world flamenco scene. Three years ago, on her first United States tour, she played to sold-out houses and nightly standing ovations. “We had a great response from the audience,” she said, “people really gave themselves over to the work.”

With one foot firmly planted in flamenco’s rich traditions and the other in modernity, Lugo seems comfortable striding the gap between two worlds. In speaking of Flamenco Frequencies, she said, “We touch on some points that are very traditional, at another point we touch on experimentation…and later we go into more fusion, let’s say something more contemporary.”

This is a young artist intensely focused on searching out new ways of expanding flamenco’s boundaries. Fellow flamenco dancer and FUNDarte cofounder Niurca Márquez said of Lugo, “She is somebody who is constantly searching for common roots and how we create dialogue.” Lugo’s authenticity is another aspect of her artistry that impresses Márquez: “She has a clear sense of artistic purpose that is unusual in someone so young. She knows who she is and is chipping out a space for that person in the world of flamenco.”

That world of flamenco has been part of Lugo’s life since childhood, but she says she turns to many different sources to nurture her work. For example, Lugo’s strong classical ballet background is readily apparent in her technique. The stamp of contemporary dance can be seen, too, in the unconventional angles of the head and twists of the body one sees in her choreography. She also speaks of her love for the martial arts and their sharp, powerful gestures. Finally, flamenco’s deepest roots in Indian classical dance can be found in the expressiveness of Lugo’s eyes and hands: “The hands tell stories,” she said.

Founded 15 years ago in Madrid, Casa Patas Foundation is dedicated to bringing the best new flamenco artists out of Spain and onto the world stage. As for Miami’s FUNDarte, its record so far in presenting the best of contemporary flamenco to South Florida audiences is impressive: from Juan Carlos Lérida’s groundbreaking ToCaBa to last year’s presentation of the unpretentious, utterly irrepressible Mariana Collado and her partner Carlos Chamorro in Flamenco de plomo y cobre, to Lugo’s upcoming concert, FUNDarte showcases some of the most interesting and challenging performers working in the genre today.

Like any living art form, flamenco is ever-changing, and gutsy artists like Karen Lugo are at the vanguard of that shift. “Flamenco will continue evolving in an endless series of possibilities,” said Lugo. “I love to see that it is expanding. I love seeing the different possibilities that this offers. Things will happen that we cannot even imagine. … If you truly feel it and if you do it with respect, then everything will turn out well.”

What: Flamenco Frequencies by Karen Lugo and the Casa Patas Foundation