Arts Ballet Theatre of Florida in “Tribute to Diaghilev” 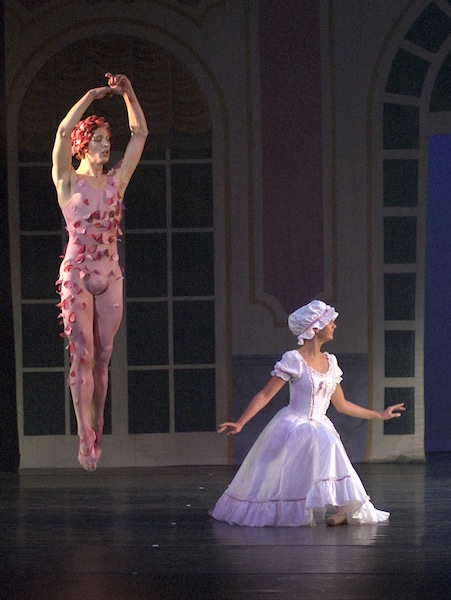 Lineage matters in ballet, preserving those fine points of technique and interpretation that only a previous generation can pass on to the next. As artistic director of Arts Ballet Theatre of Florida, Siberian-born Vladimir Issaev has been able to count on pedigree while preparing “Tribute to Diaghilev,” his 17-year-old company’s first program of the season.  Moscow-trained by direct artistic descendants of such Russian-school luminaries as Agrippina Vaganova, Issaev upholds the classicism that grew from its Italian and French Renaissance roots to the international offshoots of our own time. In the early 20th century, Serge Diaghilev, the prodigious impresario of the Ballets Russes, championed performers and designers who recharged and sometimes rattled that classical tradition flashing it all over the world.

The beauty of the Russian style, Issaev contends, lies in “its coordination of human anatomy, a perfect harmony in working from head to shoulders and arms, from torso to legs and feet.” A widely sought-after teacher, Issaev gives his dancers a strong base to tackle not just a rigidly codified repertory but also the daring angles of neoclassicism. While his own choreographies favor theatrical storytelling, he also honed his craft as ballet master for the late Vicente Nebrada, the Venezuelan director of Ballet Nacional de Caracas whom he calls “the Latino Balanchine.”

Among the offerings in ABTF’s Diaghilev tribute, Le Spectre de la Rose — with its bravura for the man (the spirit of a souvenir rose) and graceful delicacy for his female companion (a young girl fresh from a ball) — best shows off the exuberance of classical technique. The 1911 Fokine choreography, with leaps and waltzing sweeps to a Berlioz orchestration of von Webern’s Invitation to the Dance, brings special fluency to the dancing, sporting a trademark pliancy in the male’s port-de-bras. Rounding out this program, Issaev will offer his own version of Petrouchka and The Rite of Spring, both to Stravinsky scores.

Petrouchka, dating to 1911 and telling the story of puppets come to life at a St. Petersburg fair, proved amenable for the artistic director with its folkloric flair. The Rite of Spring, however, as an iconoclastic phenomenon, remained daunting.  “I can say with all my heart this has been my greatest challenge,” says Issaev. “It’s only at this point in my career that I have enough experience and understanding to put The Rite on stage. The music is so powerful, the choreography so complicated!”

The riotous reaction in a Paris theater to the 1913 premiere of this work, which Nijinsky choreographed, indeed sent shock waves through artistic circles. Stravinsky’s poly-rhythms and alarming sonorities energized a story that culminates in the sacrifice of a maiden; the choreography — earth-bound and often trance-like — displayed aboriginal vigor to evoke primeval Russia.  “Even in my time in the Soviet Union,” says Issaev, “this work had the air of the forbidden.”

At a rehearsal in the North Miami Beach studios ABTF has called home for six years, Issaev coaxed his ensemble through tramping circles that, like a noose tightening, heightened the trepidation of the sacrificial victim. The steps in all his works, the choreographer points out, arise in great part from the dancers’ strengths. “I want audiences to see them at their best,” he insists.

Hernán Montenegro, a 20-year old Chilean whom Issaev spotted at a competition, first came to South Florida on an ABTF scholarship and now finds himself taking on the challenge of leads in both Petrouchka and Rite.  “It’s a thrill to do something so different — to grow in so many ways,” he says, singling out his newfound strength and evolving musicality.

Alongside Montenegro, the program will feature a group of recently arrived Japanese dancers. Takayuki Asai brings special buoyancy to Le Spectre and eccentric articulations to the clown Petrouchka. Hirofumi Kitazume, a quicksilver performer with high jumps, will alternate in those roles plus undertake The Rite opposite Yukina Yasuhara, whose sorcerer whips up mystery and menace.

“I like to work with people who enjoy learning from what we do,” says Issaev. “Our direction always takes off from ballet history.”  His dream list includes putting on a full-length work based on the life of Manuela Sáenz, South American liberator Simón Bolívar’s lover.  “Of course it would be wonderful to have a bigger budget, but regardless we’ll maintain a repertory unlike any other in Florida.”

This preview also appears in the Miami Herald.