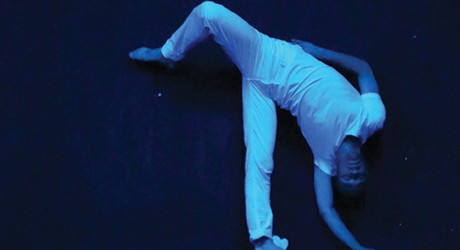 During Art Week in Miami anything is possible — anything, at least, that concerns the creative arts. How about dancers selecting from an array of small sculptures to create mural-scale drawings underfoot as part of their choreographed performance? This weekend, the Arsht Center is programmed to host exactly that, in the premiere of a collaborative presentation titled Occupant by experimental choreographer Jonah Bokaer and former Miamian, multi-media artist Daniel Arsham. While each maintains an individual, globetrotting practice, they have joined forces numerous times — twice just in November when Bokaer staged opening events for Arsham’s gallery exhibitions in London and Amsterdam. Minimalist solo dances mirrored and contrasted with Arsham’s life-size Pompeii-inspired figurative sculptures, cast in crushed glass and resin. In a recent Crane TV interview, Arsham described Bokaer’s sensibility as “clean and simple — architectural, almost.” Arsham’s shows also featured eroded, degraded, obsolescent objects of communication (cameras, microphones, telephones) that are a current theme for Arsham and play again in Occupant. Last year at the Arsht, their dramatic, Why Patterns, re-imagined the stage as a series of shifting game fields with dancers as contestant-collaborators, dramatically interacting with ping-pong balls. For Recess, part of the same program, Arsham had proposed the stark scenography of a large roll of paper on the floor. Bokaer engaged this “prop” as a readily maneuverable foil for varied interventions: wrapping, gliding, tearing, rolling. Paper returns as a key element of Occupant. Bokaer described the installation and choreography. “The stage design is monochromatic, and is comprised of a floor grid of white plaster-cast objects from the recent past: Daniel’s ‘Future Relics,’ which comment on the recent decay of audio visual devices.” Arsham regularly presents modern communication culture in a condition of partial disintegration, as though archeological discoveries. (Casting a petrified-looking version of musician-producer Pharrell Williams’ 1980s Casio MT-500 keyboard was a recent venture). In fact, these forms are essential to both the Occupant and his solo exhibition, Future Relic at Oh Wow Gallery this week at The Webster Hotel on Miami Beach. Themes of impermanence and the destructive power of nature derive in part from Arsham’s childhood experience of Hurricane Andrew. Arsham and Bokaer share fluency with technology. Sequences of projections (using videos of prior performances) onto a large and disintegrating stage construction were central to Replica, performed at both the Arsht and the Museum of Contemporary Art (MOCA) in 2010. Bokaer explained that for Occupant, an extended development process dates back to September 2012, “which allowed us to tech the production fully….Our studios are very close to one another in Brooklyn, and the creative collaboration is hand over hand. We are like brothers.” In speaking to students at The New School in New York City, he praised Arsham for “always trying to tweak the codes of modernism.” In his outreach to Arsham and other partners, the experimental choreographer, who has won a human rights award as well as major artistic recognition and fellowships, allows the artist to go beyond the expected domain of a visual artist’s contribution. As for the initial segment of the upcoming Arsht premiere, “The first is a 45-minute movement in which a trio of performers enact a high-intensity choreography amid a monochromatic installation by Arsham,” he explained. “The public enters a bi-lateral performance space, with seating on both sides, and a room lit entirely by blue fluorescent lights, casting an eerie glow onto the room, the space, the scenography, clothing and the whole surroundings.” Arsham and Bokaer met working with Merce Cunningham, the dancer/choreographer himself known for rule-breaking and collaboration with cutting edge visual artists. Arsham designed staging for the company during Cunningham’s final years and brought his own pixilated, wall-breaking vision to the productions. In Occupant, objects of technology are recent, but already antiquated. They become a consumable, in the interest of creating art. For the second part of the performance, “this is a virtuosic and quite high-speed performance,” he says, “which demands a lot of the performers, and the public, for a tightly structured 75-minute event.” The dancers are tasked “to create a floor drawing out of the plaster objects created by Arsham — the reveal, in this second part, is that the floor is actually comprised of paper. [It’s] a 30-minute drawing, a choreographic design.” Using dance to create drawings is a made-for-Basel gesture. Occupant at the Arsht Performing Arts Center, 1300 Biscayne Blvd., Miami; at 6:00 p.m. Friday; 2:00 p.m. and 6:00 p.m. Saturday; 2:00 p.m. Sunday; cost is $35; box office 305.949.6722; www.arshtcenter.org; www.jonahbokaer.net. www.danielarsham.com This article first appeared in Miami New Times