Ryan Nicolas DeAlexandro and Trisha Carter rehearse with other company dancers in the background. (Photo courtesy of Andrea Spiridonakos)

And, true to form, the company was set to present innovative new works about Miami’s distinctive histories and architectures during its 2020 Lab Series at the South Miami-Dade Cultural Arts Center’s Black Box Theatre on March 21 and 22. Then the virus hit.

Still, the preview serves as a tantalizing snapshot of the company’s work in progress. The pieces are expected to appear in the company’s July and November 2020 performances.

The centerpiece of the hourlong program was to be a new work by choreographer Kevin Jenkins.

Since then, Jenkins has made the Magic City his home, and his newest work, “DECO,” takes its inspiration from Miami’s neighborhoods and its tradition-rich people.

“Audiences will probably see the art deco shapes and lines in the movements,” Jenkins said.

The choreographer layered multiple meanings within the work. Some passages, for example, reflect the resistance of the Miccosukee Indians to the advancing federal army during the Seminole Wars.

As the dancers prepared to rehearse on a recent afternoon, the choreographer reflected on his choice to set the work to Mexican composer Arturo Marquez’s dramatic 1994 orchestral composition, “Danzon No. 2.”

“This is the only company that could do this piece justice based on the passion and spirit DDTM brings to the performance of it,” Jenkins said.

During rehearsals, six dancers in a line faced the back wall and posed – hips cocked, arms overhead as a svelte Miranda Montes de Oca and Ryan Nicolas DeAlexandro (both dancers new to Dimensions Dance this year) strode to the front. As the two soloed to the side, the remaining dancers formed couples for a series of lifts.

“DECO” shows off Jenkins’ distinctive style – furious upper-body work with arms, wrists, hands and fingers ceaselessly in motion in a kind of kinetic pantomime reminiscent of Bollywood dancers. Below the torso, everything stays calm. The footwork is simple but grounded. 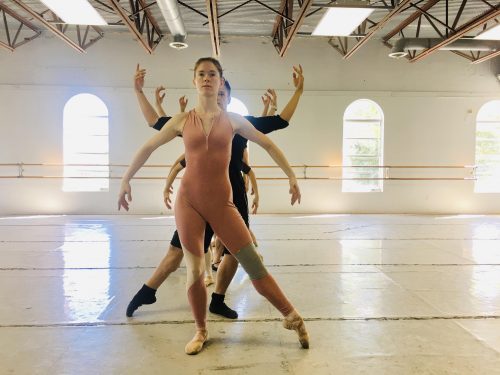 Chloe Freytag is a veteran of Dimensions Dance Theatre of Miami. (Photo courtesy of Andrea Spiridonakos)

When the tempo slowed, company veterans Fabian Morales and Chloe Freytag took the spotlight with jazzy rolls of the hips and s-rolls of the upper torso. Salsa movements peppered their sequences.

In another vignette from “DECO” – titled “Amanhecer” – the cello laid down successive long notes, and Morales lifted dancer Claudia Lezcano through a series of splits that crossed the room. In one sequence, the two played a game of hide-and-seek among the other dancers, who stood motionless like totems. The segment closed with a sequence of lifts and Morales supporting Lezcano.

The piece titled “Olimpico” forms part of the full-length “DECO” but was intended as a stand-alone work for the Lab. “Olimpico” featured Montes de Oca and DeAlexandro in a fiery, lightning-fast pas de deux set to the driving rhythms of flamenco guitar.

Especially notable here was DeAlexandro, who not only supported Montes de Oca in deep back-bends and lifts but also snapped out combinations as complicated as hers.

Jenkins said he likes to make the guys work: “I wanted to do a fun piece, and I’m a big believer that the guys have got a free pass in dance for a long time.”

Another work scheduled for the Lab was “Preludes” by South Florida choreographer and Miami City Ballet dancer Ariel Rose. Dimensions Dance has frequently showcased his works, including 2017’s “Esferas” and last July’s “Equus.

In “Preludes,” the pas de deux featuring DeAlexandro and Lezcano started slow, with each dancer turning alone. As things heated up, the two snapped out sequences that criss-crossed the floor repeatedly. As the piano wound down, they completed turns as a couple, DeAlexandro lifting Lezcano repeatedly.

Kronenberg shed light on the choice of the music, explaining that the piano work comes from the 2015 “Preludes” album by Jorge Mejia, president of the Latin division at Sony/ATV Music Publishing.

Mejia is a product of Miami’s New World School of the Arts, Kronenberg said, and she got to know him while dancing with Miami City Ballet. A chance Lincoln Road re-connect led to Dimensions Dance performing a set of “Preludes” for the Lab.

For now, Dimensions Dance is on hold. But with the pieces now hopefully debuting in July and November, the company is giving audiences something to look forward to.