There was plenty to celebrate in the Alvin Ailey American Dance Theater’s return to Miami on Feb. 25-26, 2022: The exhilaration of gathering with other dance lovers at the Adrienne Arsht Center’s Ziff Ballet Opera House, a joyful annual ritual that was interrupted by two years of pandemic. The thrill of witnessing superb dancers. The emotional rush of watching founder Alvin Ailey’s iconic and beloved masterpiece, “Revelations.”

A particular reason for Miami to celebrate: The two artistic leaders of one of the largest, most famous and most important modern dance companies in the United States are from Miami-Dade County.

Liberty City-raised Robert Battle marked 10 years as artistic director, with a program of his dances on Friday evening and Saturday afternoon. Saturday night’s show paid tribute to another Miami alum, star dancer Jamar Roberts, who is retiring from performing after 20 years but has started a vital new era as the Ailey troupe’s first resident choreographer.

“Two Miamians — there must be something in the water here,” said Battle from the stage on Saturday, grinning ear to ear. “Don’t tell the governor.” That was the only mention of politics in his warm, hometown-loving, pre-show speeches, which on Friday included shout-outs to his mother (“How am I doin’, mom?”), to other relatives (“My aunt is here. She taught me how to cook.”), and the community that fostered him. 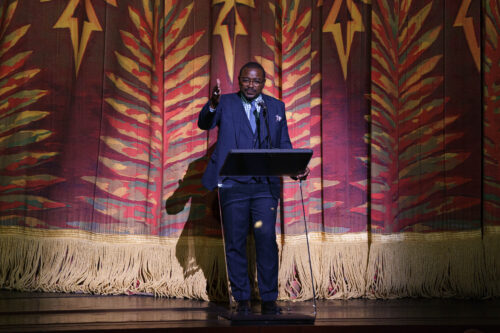 Something else for Miami to be proud of — and take note of: Battle and Roberts, both from families with limited means, had their talent fostered in public school arts magnet programs, got crucial mentoring as boys from dedicated teachers who went far beyond their jobs, and graduated from the New World School of the Arts (NWSA), the city’s public arts education jewel. (At a time of attacks on public education, these two men’s achievements serve as an important reminder of what can happen when any child, not just those who can pay for private lessons, is able to participate in the arts.)

Both were inspired by seeing the Alvin Ailey troupe perform in school-sponsored trips. In his speeches, Battle also mentioned Miami Northwestern Senior High School, where he started dancing, as well as Liberty City’s African Heritage Cultural Arts Center and NWSA.

He did drop the knowing aside that “at Ailey, we celebrate Black History Month all year long.” But mostly, Battle celebrated the ability of dance, and the arts in general, to unite and lift us up in dark times.

“We need to really relish being here together,” he said on Saturday. “‘Revelations’ stands as an emblem of defiance, resilience, beauty, hope and faith. The notion that we can all come together in this space to celebrate beauty, and that this too shall pass.”

The two men are very different choreographers. The Battle program on Friday was packed with seven of his pieces; most of them different stylistically, short and with small casts – a thorough choreographic sampler, but with little sense of an artistic throughline. All but one pre-dated Battle’s tenure leading the company.

“Mass,” the opener, was inspired by Battle’s childhood singing in church choirs, with 16 dancers in opalescent robes, set to a percussive commissioned score by John Mackey. They moved in precise, darting lines and circles into shifting, beautifully shaped formations, with small tense flurries of movement — soloists (Jeroboam Bozeman was excellent) emerging with urgent but still-taut bursts. The sense was not of exaltation, but of yearning constrained by regimented structure.

Company veteran Yannick Lebrun gave a marvelous performance in “In/Side,” a solo to Nina Simone singing “Wild is the Wind,” twisting and contorting as if emotional agony were literally turning him inside out. “Ella,” by contrast, was all lickety-split musical and physical playfulness, with an excellent Ghrai-DeVore Stokes and Samantha Figgins charming the audience in this blisteringly fast, witty mirroring of Ella Fitzgerald’s vocal pyrotechnics. It felt similar to “For Four,” with Ashley Kaylynn Green, Solomon Dumas, Belén Indhira Pereyra and Miranda Quinn stunning and charismatic in a virtuoso spinning, leaping, booty winding (with a hint of vaudeville) choreographic riffing on Wynton Marsalis’s “Delfeayo’s Dilemma.” (Two brief activist gestures, an image of an American flag and the dancers raising their fists in the air, felt out of place.) 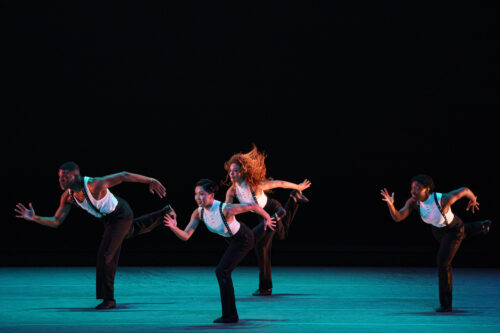 The Battle program concluded with his section of “Love Stories,” the final part of a three-part tribute to the Ailey company from 2004, which was his first commission from the troupe. Set to Stevie Wonder’s soulfully irresistible “Fingertips” (Parts 1 and 2), this was the most emotionally resonant of the Battle pieces, an evocation of the Ailey company’s legacy, of dance as struggle and triumph, as a way to move forward.

“The notion for me was getting out in the street, use your body against inequity,” Battle told me of “Love Stories” in a 2011 interview, as he prepared to become artistic director. “To me, that was a metaphor for the company — using your whole self to break down barriers.”

In Saturday’s program, we got to see Roberts dance one last time, in his farewell solo, “You Are the Golden Hour That Would Soon Evanesce” — short, meditative, immensely moving. Set to a Jason Moran jazz piece, it opens with Roberts silhouetted, a towering, dark figure. He emerges into the light, flows fluidly through spirals, reaches, contractions, pauses, as if his countless memories of dancing were surfacing naturally through his body, thought seamlessly translated into movement. One of the marvels of Roberts as a dancer was watching such a big, powerful man (he’s 6’4”) move with such softness and fluidity, a quality that took on an added poignance in “Golden Hour.” He finished as he began, returning to darkness, disappearing from the stage, but not from our memories.

Especially not since Roberts will be making pieces like “Holding Space,” a powerful evocation of the anxiety and isolation of the early stages of the pandemic. It’s set to stark electronic music by Tim Hecker, with 13 dancers in loose white pants and tops (designed by Roberts) that evoke both pajamas and asylum inmate uniforms, and Brandon Stirling Baker’s harsh white lighting adding to the tension. Roberts’ choreography has an organic quality that gives the dancing, and structure, an intoxicating sense of natural flow. It seems to radiate from the Ailey dancers as naturally as their breath. 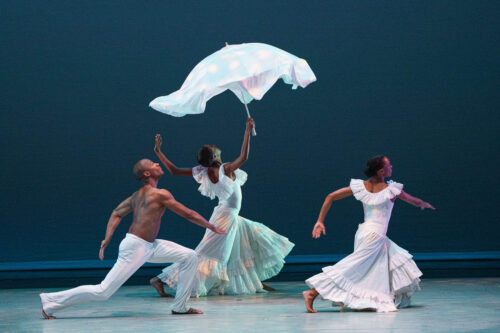 Both performances ended with “Revelations,” which the audience welcomed like a longlost family member. (Photo/Daniel Azoulay)

They start in squares of light, each dancing differently, as if trapped in apartments or their own heads. Later, women dance alone inside a big box frame and others rotate around them, as if inside a shifting social isolation bubble. “Holding Space” finishes with a sense of resolution —golden light, the dancers, still separated, but moving, calmly, determinedly, together.

Saturday’s show included an early company classic, “Cry,” the 1971 solo that Alvin Ailey made for his muse, Judith Jamison, and dedicated to “all Black women everywhere — especially our mothers.” Jacqueline Green’s commanding performance showed us that this masterpiece, with its strikingly sculpted, dramatically resonant images, endures beyond its original interpreter. “Cry” evokes desperation, anger, exhaustion, mourning, struggle, work, determination, and a sense of joyous resolution that brought the audience at the Arsht Center to its feet. Fifty years later, “Cry” is still relevant.

Both performances ended with “Revelations,” which the audience welcomed like a longlost family member, especially Saturday’s livelier rendition. After a two-year absence, it was a joy to experience this perpetually powerful, emotional, jubilant gospel masterpiece. “Revelations” is its own ritual, for the troupe, and for audiences, an exultant affirmation of the power of the Ailey company and of dancing.

For information on the New York-based Alvin Ailey American Dance Theater, visit alvinailey.org. For more on the Adrienne Arsht Center for the Performing Arts of Miami-Dade County, visit arshtcenter.org.