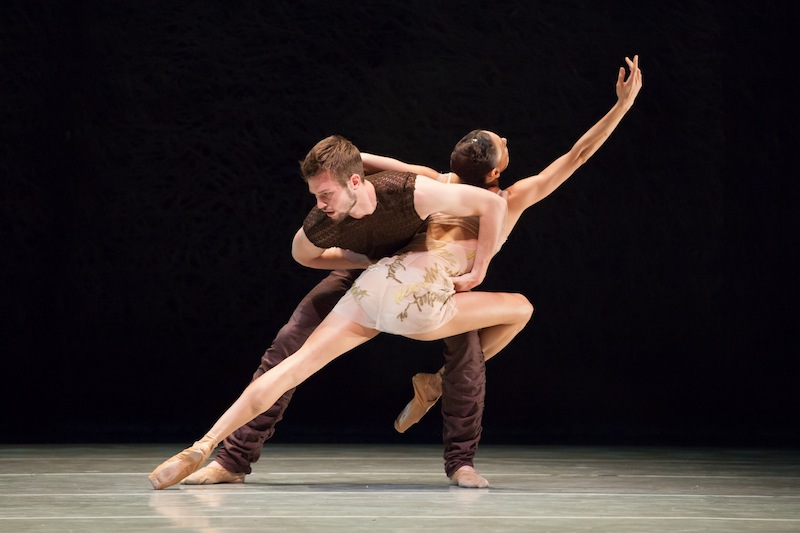 An Alonzo King dance is almost unimaginable without facility of movement, those forcefully shifting patterns of gorgeous bodies that make for a seductive surface. Yet what gives greater value to the program this San Francisco-based choreographer’s “LINES Ballet” is bringing to the South Miami-Dade Cultural Arts Center this weekend is its depth and range of vision. The featured works — Concerto for Two Violins, to Johann Sebastian Bach, and Writing Ground, to a collage of multicultural sacred music — respect history and report on universals of the human condition.

“We think of the work as thought structures — ideas put into physical form,” says King. “When we tour, we have the opportunity to share those ideas across continents and cultures with thousands of people. There are no set expectations about what people should take away. Our primary focus is to stir minds and move hearts.”

King’s take on Concerto in D minor for Two Violins, the music for 1941’s Concerto Barocco, one of Balanchine’s most revered and representative works, is both gutsy and intriguing. In the Balanchine-centric world of American ballet, the late great master’s artistry is often used to measure new choreographic efforts, separating saints from sinners depending on their distance from dance divinity. Compared to Balanchine’s achievement, how similar, how different, is King’s 2013 effort? And, through it, what can we learn about the possibilities of ballet beyond a 20th-century high point?

Well, King is not Balanchine. And that’s a good thing. A wonderful thing, in fact, as a  counterweight to doomsayers who’ve announced the expiration date of ballet and want to freeze 20th-century neoclassicism, forever aiming to reheat it as the best form of dance nourishment — a stance that Balanchine himself would probably not abide.

King draws on the power of academic classicism but sends it through his own channels. His spiritual concerns, the vigor of his sources of motivation — world culture, the determination of individuals within community, expansive music and the inimitable dancers themselves — connect with tradition to reinvigorate it. In his Concerto there are certainly references to Balanchine; in some unison passages, in intricately balanced complications, in the general crisp-white clarity of images. But King asserts a personal response to Bach’s contrapuntal composition by rearranging assemblies of dancers to maintain, for instance, more varied gender relationships and heightened emotion. “Bach’s Concerto is a sublime mixture of devotion and mathematics,” King says. “It’s beyond beauty and transcendent in form. It’s love and law. Bach said that he created music to prove there is a God. Our participation in it is a unique approach we think audiences will appreciate.”

In choosing what to take on tour, King prefers his newer or less seen creations.  Although Writing Ground dates to 2010, “It is a powerful work that has primarily been shown in Europe, and we wanted to bring it to the east coast.” Commissioned in Monaco, this premiered on the terraces of Monte Carlo’s casino. Drawing inspiration from the texts of Colum McCann, a New York-based Irish author who’s professed faith in the ecumenical power of narrative, King’s long but briskly segmented suite uses a range of spiritual songs, prominently Jordi Savali, the renowned Catalan proponent of medieval and Renaissance music.

Writing Ground offers the opportunity to relish the talent of “LINES” dancers in very focused groupings, mostly duets, trios and quintets. For King, the ideal performer of his ballets “has to be fearless and unfailingly generous. The mind and heart have to be large.” He requires in his dancers a level of technique that frees them from worrying about the demands of interpretation. But he asserts that, mostly, “They must be truth seekers, givers, humble, musical, open and willing — also in touch with their personal genius.”

While the choreographer gazes heavenward in Writing Ground, the beauty of this dance lies in the vigorous presentation of the human body as the most sacred of vessels. As such, this is a notable manifestation of King’s artistic credo. “The constant in my work,” he says, “is the excavation and discovery of limitless manipulations on movement, melding the ancient with the new. The message is that we are not weak, whining mortals. Within we carry an indomitable soul which has the ability to overcome all obstacle.”

This preview also appears with the Miami New Times.