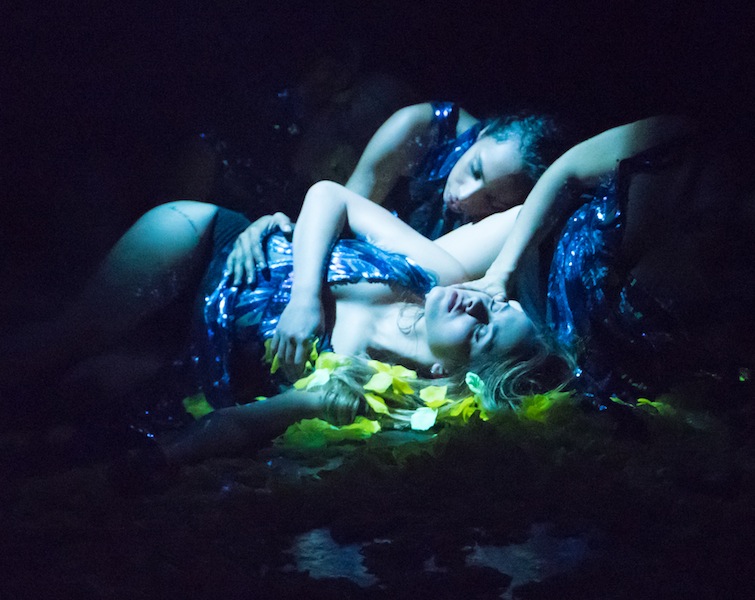 Nick’s newest project, “Flowers for Spring,” opens on June 3at Miami Light Project’s Lightbox. It’s a deeply personal meditation on her maternal and paternal grandmothers’ passage through dementia and death.

This is not the first “Flowers for Spring” from Alma Dance Theater; the original premiered in the spring of 2016. But as a choreographer, Nick often reworks her projects year by year. It’s a peculiarity of her process—one that gives us the unique pleasure of seeing an idea from multiple angles.

This year’s version is “Flowers for Spring (Part 2: The Art of Forgetting and Dying)” Nick has expanded the cast and the story, and even the musical score has changed. So for those who saw the 2016 version, this is not a re-staging but something entirely new.

We spoke with Nick about “Flowers for Spring,” and its meaning for her personally.

What is this piece about?

I premiered Part 1 last spring and this is an evolution of that story.The show tells the story of both my grandmothers. In 2015 each one of them passed away. One had dementia and the other one had Alzheimer’s. [Both versions] are taking you into the minds of my grandmothers, and dismantling the fantasy of the world that they were living in during those last months and year. It’s also called “The Art of Forgetting and Dying” because it’s a process of surrendering.It goes through the stages of any kind of crisis or trauma, which is fear, denial, and eventually acceptance and surrender, and finding peace in it.

What is the significance of the title?

Springtime was the moment between both of them dying. My grandmother passed away in January of 2015. And then February, March, April happened, and then right at the end of May, my Abuela Maria passed away. So spring was kind of this awakening for me, and a rebirth from death. It forever changed me. And the flowers: through each of their experiences, the one thing that jogged their memory, that gave them a moment to be more in touch with reality, were flowers.

It just so happened that each of them had an affinity for flowers. My grandmother loved any yellow flowers, particularly yellow daisies and sunflowers. And my Abuela Maria loved red roses. So the first act is “Abuela Maria” and there’s a red rose that plays an important part in that piece. And the second act, “Daydreaming with Jean,” is about my grandmother Jean and the stage is covered in 100,000 yellow flowers.

Flowers also have a delicacy that relates to mortality.

Absolutely. We give flowers to people when they are sick or to show them that we love them. Often flowers are associated with funerals and cemeteries, and so there’s a lot of love that comes with the giving and receiving of flowers. I didn’t want this to be something morbid—that’s the transition between the first version and this one.

The first version of the show last year was very much coming from a place where I was still dealing with it myself. I felt very isolated and everything was moving in slow motion as I picked up the pieces of my life again. And since then, a lot has evolved. I’ve had time to process it differently and I see the beauty in what happened. My goal with this is to share that with other people too, so it’s not just this difficult subject, which is Alzheimer’s and dying and ageing, but reflecting the beauty that comes with that—the love and the support. There’s beauty in death. It was my goal to find that beauty in this work.

Can you talk a little bit about the feminine aspect of this piece?

The femininity of it, the graceful beauty, there’s kind of a sensuality in Abuela Maria. I’m wearing one of her nightgowns actually, that she brought from Cuba. She was a very sensual woman, and was a nightlife woman. She loved hosting big parties at the Tropicana and things like that. So that comes out. And I wanted to explore what it must be like at that age. I’m not there yet but I can imagine, me, now, I love being a woman and part of that is because of the way I express my sensuality. And I think part of the … I don’t know if discomfort is the word, but the feeling of losing yourself as you get older, I feel like a big part of that for women is feeling the loss of their sexual nature or sensual nature.

Even through all of this, for both of them, there was still a grace and elegance. Both of my grandmothers were super glamorous women. I felt it was important to reflect, especially as a tribute to each of them as well as a piece about Alzheimer’s and ageing and dying.