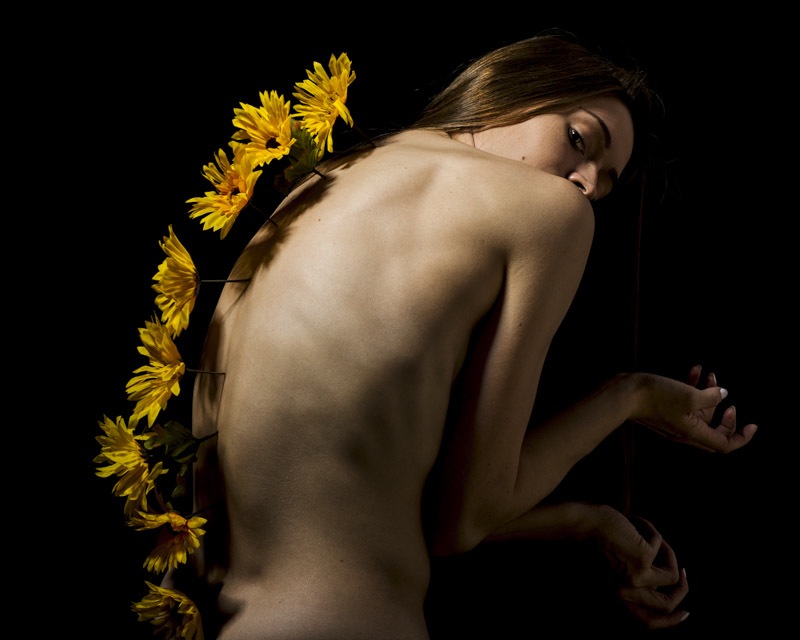 As Art Week approaches, Miami choreographer Marissa Alma Nick’s Alma Dance Theater is getting ready to add its distinctive voice, rehearsing for the upcoming performance of “Flowers” at the Colony Theater on December 2.

A meditation on aging and dying, “Flowers” tells the emotional story of Nick’s two grandmothers in their last days as they struggle through Alzheimer’s and dementia, and eventually death. If you follow dance in Miami, you may recognize the name of the piece — “Flowers” is a version of a project formerly called “Flowers for Spring” that has shown in Miami multiple times. As a choreographer, though, Nick is not content to merely repeat herself.

As she has done in her annual Halloween show “Cask,” she tends to rework ideas dramatically over time. Every new version is a transformed take on the original, an essentially new piece. This is the case here, and “Flowers” is the fifth and final version. For Nick, it has been an emotional journey laid out on stage, and she plans to leave us with a sense of resolution and acceptance in this last variation.

We recently spoke with Nick to find out about the creative and personal experience of reshaping “Flowers” over the years.

When did you first present this piece?

The first time was in the fall of 2014. My grandmother had gotten very sick. Alzheimer’s was coming in and she also had a drop in her health. She fell and broke her hip, and had to have hip surgery. The Design District at the time was doing a Performance Walk, and Craig Robbins had asked that I make a piece for that. I had said yes before my grandmother got sick. I didn’t want to back down, so I tried a few things I had been thinking about at the time.

It has been a very personal exploration for you.

Oh yeah, and very therapeutic. Even though the bigger picture is about dementia and Alzheimer’s and the elderly in general, the two stories are specifically about my grandmothers. I call act one “Abuela,” and act two “Grandma Jean.” Because that’s how I knew them. In “Abuela” you’re hearing the story of this woman who had it all in Cuba and lost not only her things but her mind, and what happened there, never leaving her house for 10 years.

In the second act, in “Grandma Jean,” she had lost her mind, she didn’t know where she was. She was wondering around in the middle of the night by herself naked and broke her hip. She was alone, crying for help the whole night until we got there the next morning and realized what happened. So this vulnerability …. is very specific to my grandmother’s story.

How has “Flowers” changed?

In every version, the tone is really what changed the most. I’ve done different costumes and different types of flowers. Hope [Littwin] has done different scores for each version. It’s been a different cast of dancers every time. And as I’ve come into more acceptance—what is it, the five stages of grief?— of the project at each stage.

Now I’m able to see the beauty in what happened and have gratitude for it.

There is still a little darkness in the piece, and it is a death. The piece ends in a death breath. And so it still has an element that is very gripping. But instead of fearing death and being angry with what happened—because we age and die—I’ve tried to mend my own relationship with it through the dance.

How does this transformation show up in your choreography?

There’s more partnering now, the dancers are more connected. One of the things that happened when I first did this piece is they were kind of isolated and very alone. That’s very much how I felt and how I thought my grandmothers felt. As I’ve come to accept and understand, on stage there’s more love, there’s more compassion.

There’s also more risk-taking just to see what is it to let go and give yourself over to someone to completely take care of you. And what that feels like to be strong enough to love somebody so much to put your own feelings aside just to be a rock for them.

I think back to the different versions. It took me a while to figure out how to verbally express what I wanted from the bodies. I explored the best I could what it feels like to be at that stage of your life where your bones and muscles don’t work for you. As contemporary dancers, how do you explore that body in a very useful body?

With my grandmothers, what I experienced was they were living in their past. It has taken me years to figure out how to make the dancers work in their own bodies now, as vibrant youthful women, and collapsing into these moments that are very evocative of an old body dying.