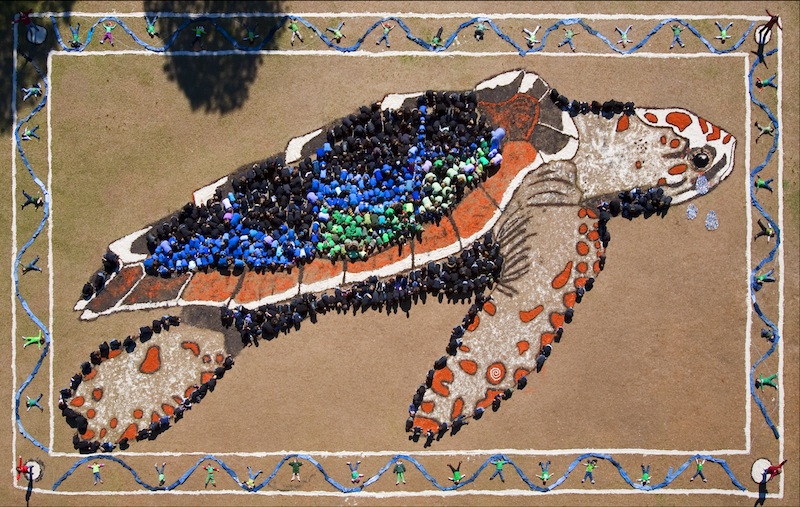 Teacher, choreographer and activist Dale Andree is known for her ability to merge activism with dance. Andree founded and directs National Water Dance, a site-specific project that joins dancers and movers from a wide cross-section of the population to draw attention to water-related environmental issues. Since 2014 National Water Dance has been creating an annual site-specific performance in South Florida as well as performances throughout the U.S.

Now Andree is embarking on a new interdisciplinary project, in association with Daniel Lewis’ Miami Dance Futures and in collaboration with photographer Daniel Dancer. Oregon-based Dancer is known for his aerial sky art and activism, especially in engaging students with the ecology around them. “Art FOR the Sky” is a mixed-media project integrating Dancer’s overhead photography, video, dance, and live performance. The result is in essence a “living painting,” created by the participants. “Art FOR the Sky,” where the outdoor “people painting” will be an image of the reef-dwelling clownfish, will be unveiled in a town hall this Thursday, March 16 at the Jose de Diego Middle School in Wynwood. The indoor and outdoor event, which also includes student artwork, live performances and marching band music, is free and open to the public.

We spoke with Andree about this multi-faceted project and its artistic value as well as its importance as a public awareness initiative.

How did the project begin? What was your initial idea?

I was intrigued by Daniel Dancer’s project and seeing the multiple images that he created at the various[international] sites he’s worked at; I thought it would be interesting to animate them with dance. From there the possibility of using the [Booker T. Washington Senior High School] marching band and bringing in hip hop to an urban school seemed a good way to connect the students to the environmental awareness that we were trying to achieve, by creating the clown fish in a coral reef.

Can you describe Dancer’s “people painting” style and how it inspires you?

His work with the students is called Ecology for the Soul and is based on six teachings: intention, collaboration, interconnection, sky-sight, gratitude & apology and impermanence. All of these teachings are realized in the creation of the image and actually being the image. The physical participation of the students in creating the art was what drew me in, and the possibility of extending that through dance is still intriguing to me.

Having worked in South Florida as an artist and activist for many years, what changes have you noticed in the environment. Where is it most noticeably deteriorating? Do people seem to be more aware?

We’re facing major changes in South Florida as a result of climate change and the degradation of the Everglades. We’re seeing the effects in the bleaching of the corals, which is at the core of this project, and the salt water intrusion that’s a result of rising seas and the lack of fresh water flow through the Everglades.

I see much more awareness and activism now on all of these fronts. Much more has to be done and at times it feels overwhelming, but the resources for informing people are readily available and I’m heartened by the degree of citizen and sometimes government involvement.