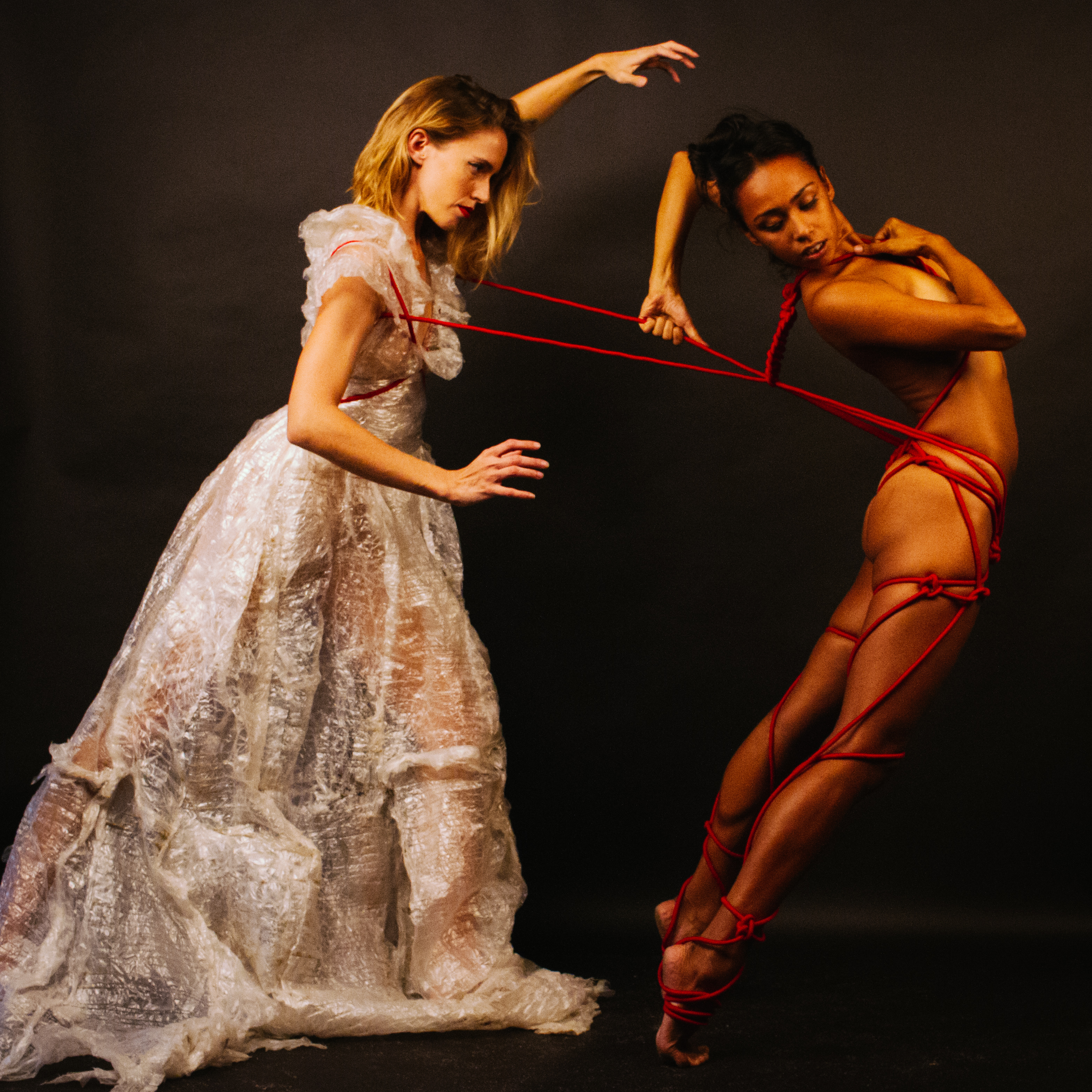 Reflecting on the brutal treatment she receives at the hands of Juliana Triviño, who plays her torturer in the October 28 Alma Dance Theater (ADT) production of “Cask,” fellow principal dancer Sasha Caicedo said, “Juliana is my very best friend. It’s so hard knowing that I love her so much, and we have to act the opposite. The easy part is how comfortable we are.”

That “comfort” makes it possible for her to accept being pushed, swung, thrown and dragged around the stage in choreographer Marissa Alma Nick’s deeply disturbing interpretation of Edgar Allen Poe’s, “The Cask of Amontillado.” Physically, for Sasha this is a “brutal, brutal, brutal role to play,” said Nick. Indeed, the thuds and squeaks of flesh on wood are unsettling to a rehearsal visitor.

During Nick’s senior year at the University of South Florida, “while exploring her dark side,” she became captivated by Poe’s grim short story. Its macabre narrative of betrayal, rage and revenge became the vehicle for her thesis project and complemented her study of Carl Jung’s theory of the shadow persona.

“Cask”’s themes were personally familiar from abusive love relationships Nick had endured. “We’ve all felt pain; we’ve all felt hurt by someone we loved,” she reflected in a recent interview. “I thought I could honestly connect to both characters, feeling so disconnected from reality and then realizing the consequences only at the final moment.” In Poe’s story, set in an unnamed European city centuries ago, nobleman Montresor (Triviño) had been grievously affronted by his fellow wine connoisseur, Fortunato (Caicedo). The unspecified offense drove Montresor so mad that he determined to secretly murder Fortunato after luring him into his wine cellar – purportedly to sample a cask of rare Amontillado sherry.

Nick has presented this sinister theater piece five times, each with changes of venue, staging, choreography, costuming and music. Among her latest innovations is the use of aerial silks, a type of acrobatics, executed while hanging from long strips of fabric, secured to overhead rigging. They serve as a versatile and expressive vehicle of potential escape and of bondage for Caicedo’s ironically named Fortunato character. Practicing and performing with the silks demand prodigious strength and flexibility. Her slender physique, minimally costumed, clearly reveals the punishment meted upon her by the malevolent, but inwardly tortured Montresor, whose regal gown reinforces her dominance, pride and vanity in what may be a sadomasochistic relationship.

Nick impressed on her two principals that, while quintessential antagonists, they’re almost two sides of the same person. “We all have the potential to hurt and be hurt,” she said. “It’s an exaggerated story, but it’s toying with the scenarios that play out in all of our minds.

Montresor’s suffering mirrors that of her victim. Anguish is revealed in the contortions of her initial solo and amplified by the recurring appearances of three dancers, called “Tenebris” (darknesses), who embody and externalize multiple facets of her inner life. They form knots, swooping, writhing, mirroring and contrasting with one another.In a key sequence, they move to center stage like one multi-jointed creature. Fortunato is draped across their backs until they unceremoniously dump her.

Revenge may be best served cold, but it’s never a true resolution without the inner work of forgiveness. Gestures of apparent tenderness are trigger points that only increase Montresor’s pain, madness and aggression. As Nick explained, “There’s no question of forgiveness, but there are moments of intimacy, reminding us of how much they loved one another.” Caicedo reflected, “You go through anger, denial, pleading. Why do I deserve this? Why is this person I love doing this to me?” Her specific malfeasance is never explicitly illuminated, but we comprehend its depth and intimacy through both their choreographed introspections and Montresor’s physical assaults.

Nick melds the cool video aesthetics with the immediacy of theater-in-the-round and Japanese Butoh theater to her experimental practice. This strategy pushes audiences to focus not only on the “big picture,” but to zoom in on the nuances of skin texture, subtle flexing of joints, angles of limbs. “There is somebody facing every direction of your body at all times,” said Nick, “so there’s not one part that doesn’t count.”

Music is integrated in a distinctive fashion. Composer Hope Littwin, who attended Miami’s New World School of the Arts with Nick, remains a favorite collaborator. After initial conversations and exchanges of musical samples, Nick left Littwin to her own process and used Philip Glass’ minimalist Koyaanisqatsi during rehearsals. In fact, Littwin’s music won’t arrive until the final week, intentionally keeping things fresh and vital for the dancers now entering their final week of rehearsal before the Halloween weekend performance.