A Contemporary Take on the Classic Carmen 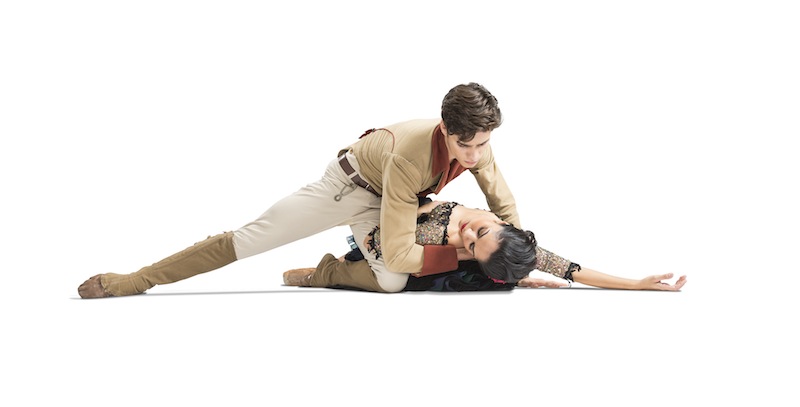 A high-intensity drama about spirited Spaniards seems like such a good fit for Miami City Ballet, you’d think company artistic director Lourdes Lopez ran out looking for Carmen. But in a way it was Carmen that came to her.

As the centerpiece of MCB’s third program of the season, this story ballet by contemporary British choreographer Richard Alston has all the elements to give it prominence in the troupe’s repertoire. And, luckily for the choreographer, MCB has the craft and personalities from corps to principals — with force, speed, flair — to offer Carmen interpretive luxury in its first artistic home in America.

“I got a chance to see Alston’s company and became very intrigued with his work,” says Lopez, who’s prioritized giving her dancers worthwhile opportunities to perform pieces by living choreographers. “I was especially taken by his musicality and handling of the corps,” she explains.

It was through exploration of collaborative possibilities with the choreographer that Carmen unequivocally won Lopez’s heart. “This struck me as absolutely perfect for Miami City Ballet,” she says, singling out the piece’s reliance on pointe shoes — a rarity in Alston’s work — and its use of Russian composer Rodion Shchedrin’s treatment of the original Bizet opera score.

“That has a sort of jazziness dancers can really respond to — a timbre that sits well in your body,” Lopez says. She recognizes the historical import of the music, which the composer scored for strings and an assortment of percussion for a Carmen starring his wife, Bolshoi Ballet prima ballerina assoluta Maya Plisetskaya, in 1967. For that dance incarnation, the late Cuban choreographer Alberto Alonso rendered an expressionistic portrait of the gypsy who seduces the soldier Don José, later to betray him with Escamillo, a bullfighter, occasioning her murder by the spurned lover.

Alston, who’s headed his own company since 1994, created Carmen for Scottish Ballet in 2009. He took on this assignment as a challenge after nearly four decades of choreographing in a crisp, contemporary idiom. Once a Merce Cunningham disciple, he’s kept from that early New York dance training a sense of what constitutes movement integrity in relation to music. But he’s also maintained a sensitivity toward the demands of classicism.

“As I found out, he’s someone who understands Balanchine well,” says Lopez, a Balanchine-shaped artist herself like most of the dancers in her company. “And he happened to be looking for a special kind of company to perform Carmen in the United States.”

Sisters Patricia and Jeanette Delgado, among the ballerinas at MCB who’ll bring Carmen’s title role to full-blooded life, prize the productive atmosphere Alston created. They had to learn the whole ballet in three weeks and needed to keep moving, internalizing a great deal of emotional development to give it clarity from scene to scene.

“These have to be real people,” Patricia points out. “And there’s always the challenge of making the steps look organic.” The shifts in direction, the angle of the lifts, even the manner of walking demanded a readjusted focus.

Both sisters are meticulous in preparation, and Patricia appreciates Alston’s use of a fortune teller to highlight Carmen’s gypsy culture, which adds a mystical dimension to the palpitatingly carnal action.

Jeanette confesses she can never have too much information, saying, “I’m the type who loves to write things down. Every detail helps me open up and make the character my own. In the steps I need to be in touch with what I’m feeling.”

One of her favorite moments comes in dancing the Habanera. “It’s a wonderful way to dive right into the character — a declaration!” That lets her establish the indisputable beauty — and, soon to appear, danger — of display and desire. To firmly place Carmen between those meridians of attraction and jealousy in the ballet’s torrid zone, she’s been able to play off Jovani Furlan as Don José, and the more seasoned wiles of Reyneris Reyes as Escamillo.

For Patricia, a pas de deux toward the end, when Carmen rejoins Don José after her fling with Escamillo, reveals a tender side to the firebrand, which the ballerina finds essential in humanizing her. “She’s often cunning, over-confident — so unlike me. So, being able to show her as a whole person has been amazingly rewarding.”

Along with Carmen the program brings Balanchine’s Allegro Brillante, a dazzling primer on the choreographer’s style and invention, and the company debut of Twyla Tharp’s Sweet Fields, a paean to human community aloft on Shaker hymns.