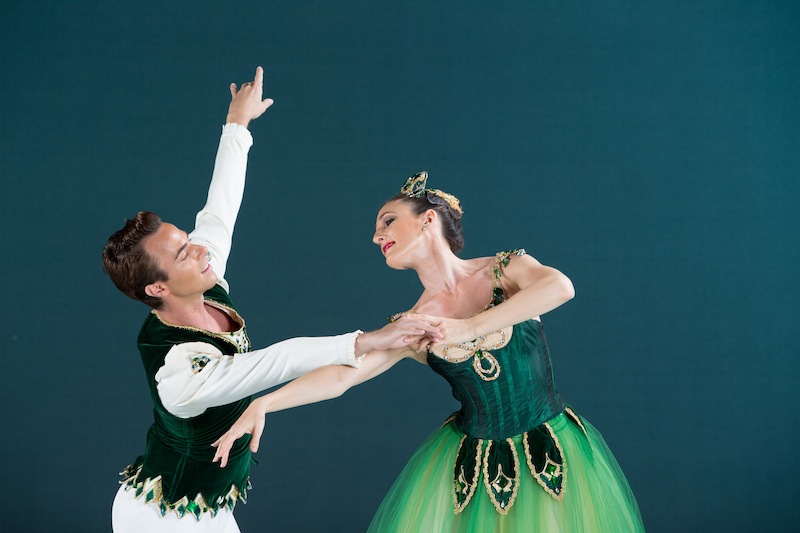 A 50th anniversary calls for gold in celebration. But Balanchine’s “Jewels”­—a sublime marriage of music and choreography from 1967—brings Emeralds, Rubies,and Diamonds. Those precious stones give name and color to the three sections ofa work recognized as the first full-length non-narrative ballet, a fitting opener for Miami City Ballet’s gem-studded season at the Arsht Center.

“Jewels” gets value from both a broad vision and fine details. Displaying distinctive qualities as well as overall connections, its parts add up to a compendium of ballet styles supported by suggestive scores. Emeralds harkens back to a French-perfumed romanticism and uses incidental music by Gabriel Fauré (for the stage works “Pelléas et Mélisande” and “Shylock”). Rubies relies on Stravinsky’s Capriccio for Piano and Orchestrato stir up its jittery modernity.And, to Tchaikovsky’s Symphony No.3 in D major, Diamonds closes with royal radiance.

Evoking a green expanse, while the dancers luxuriate in the lush musical milieu, Emeralds—though often pensively paced—is no mere walk in the park. Tricia Albertson, a lead in the initial movements, can attest not only to the buoyant lyricism of her role but also its considerable physical demands.

“I get tired going from the opening straight into a long, difficult solo,” says Albertson, a seasoned principal ballerina who, partnered by Rainer Krenstetter, is significantly dancing this part for the first time. “I’ve really had to learn to keep my strength, not so much because the individual steps are tricky but due to their sustained accumulation. And the music is so beautiful, it’s a challenge to distill that.”

She mentions having to surrender to the orchestral flow as if submerged. Arms up, hands weaving, and on pointe for attentive treading, a ballerina here can indeed appear to be testing the waters. There’s a sense of discovery and wonder–as if to underscore, given “Jewels”regard of history, the art form’s early Parisian heyday.

Rubies fast-forwards to a New York vibe. Urban in rhythm, its push-and-pull keeps the dancers’ blood pumping, with the male lead in prominence.

“This is a very special role for me,” says Renato Pentads, who first tackled the ballet’s feats nearly 15 years ago, coached at MCB by then artistic director Edward Villella, for whom Balanchine choreographed the lead.

Reflecting on his long-standing relationship with this prized assignment, Penteado notes, “I pace myself better now. This is like running a marathon. And I think more about the dancing from the inside. It needs athleticism, but I try to balance that with careful details—to make it bold but not harsh.”

As the choreography takes the score’s speed lanes and sharp corners, Penteado whisks by, carousing with a playful pack of guys and joining up with a driven woman—everyone decked out in red. This time he is particularly appreciative of his partner, Katia Carranza, a talented contemporary who left MCB a while back for her native Mexico and is now aiming high to mark her return to the company.

Considered as a triptych,“Jewels”bestows on Rubies—the central panel, so to speak—the perspective of its wings:Emeralds, the curtain-raiser with its Francophile ambiance, and the concluding Diamonds. That last work mines the choreographer’s formative base, Imperial Russian ballet, which profited from a French inheritance and passed on the artistic wealth— invested further by Balanchine—across the Atlantic. In effect, “Jewels” reflects its émigré creator’s own trajectory: St. Petersburg, Paris, New York, the center of his stylistic innovations.

“Dancing in Diamonds,” Simone Messmer says, “lets me combine all of my knowledge of ballet.” As the lead ballerina, she takes the strictures of classical technique—as in the emphatic carriage of the upper body—toward a more vivid interpretation. Performing in such Balanchine works since joining MCB two years ago, she confesses, has helped her become her own woman on stage.

A new partnership here with Jovani Furlan, a rangy, energetic soloist with the company, has further developed her artistry. By accommodating to each other, not just in rehearsals but through frank discussions–“we’re both very open people,” says Messmer—the pair is giving intimate dimension to their regal roles.

“This kind of dance allows a ballerina to rise to the next level,” Messmer says. “It will be a treat for everyone.”