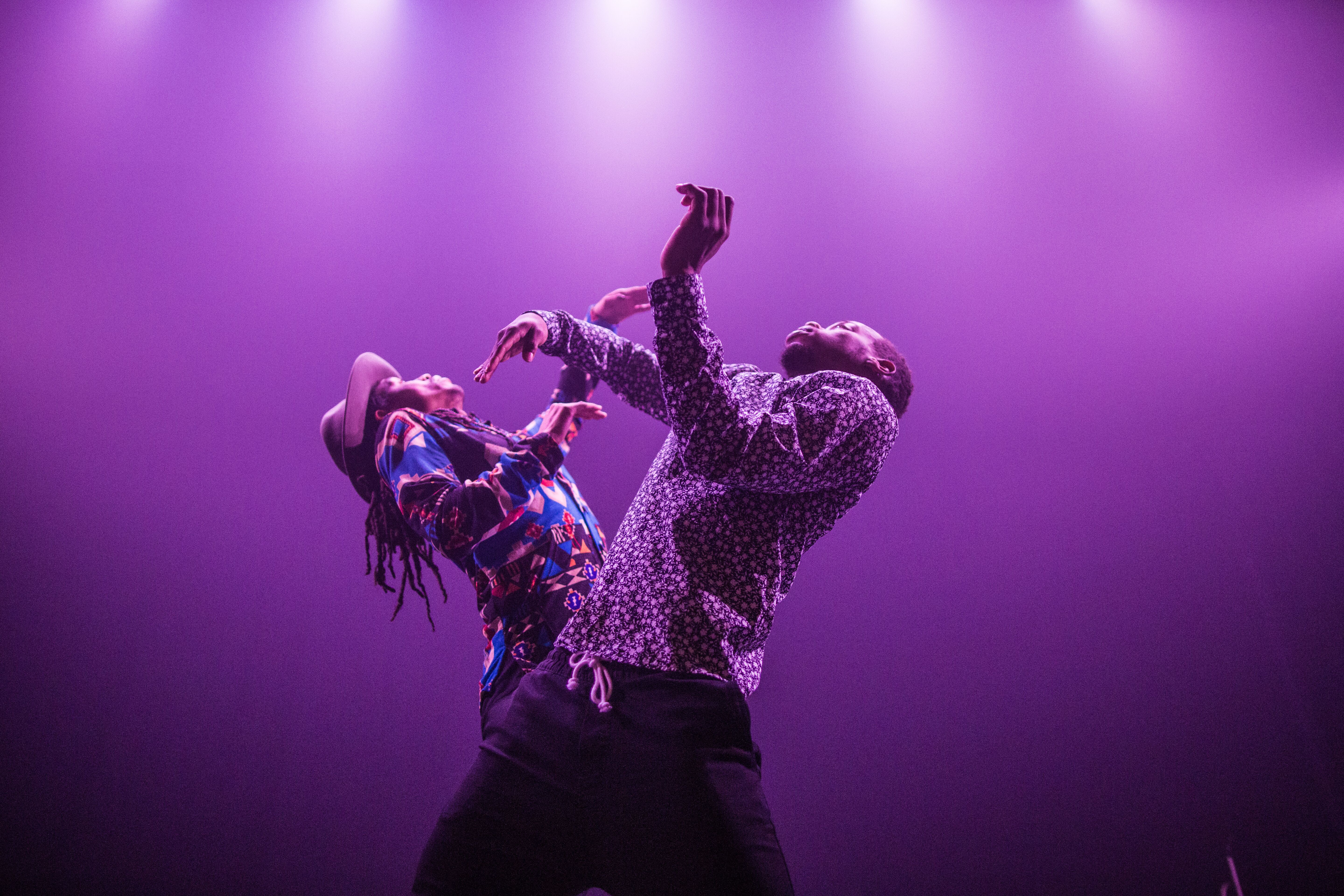 South Florida-raised dancer/choreographer Jon Boogz has always wanted to use dance to tell stories that matter.

Growing up, the only things he loved as much as dancing were issue-driven films such as “Schindler’s List” and “The Color Purple.” As a street dancer in the style called popping, however, Boogz was in a world where success typically means getting on TV shows, touring with pop stars, winning competitions, and constantly upping your virtuosity. Not breaking hearts, opening minds, or changing worlds. He wanted more.

“People like to put boundaries on the art form,” Boogz says. “I always wanted to create powerful stories with it.”

Boogz has done just that with “Love Heals All Wounds,” an acclaimed multimedia theater work he created with Lil Buck, a dance star who made famous the Memphis jookin style. The show, which has been touring for two years, comes to the Adrienne Arsht Center for the Performing Arts on Feb. 8 and 9.

“We’ve been getting immense feedback,” he says. “During [question-and-answer sessions], people are crying, saying their lives are changed.”

“Love Heals All Wounds” uses street dance, poetry, film and live music to express the two men’s feelings on subjects such as social injustice, racism and environmental destruction. The show has received a passionate response, giving Boogz faith that they’re having an impact.

He also hopes it shows other dancers from the B-boy and street dance worlds that they, too, can find creative fulfillment and success outside pop videos and commercials.

“We want to empower people like us, give kids who come from neighborhoods like we come from something else to aspire to,” Boogz says. “There’s always been people thinking more uniquely and artistically about the [street dance] genre, but there wasn’t a lane for it. We’re opening up a new highway.”

Boogz, 32, grew up in Hollywood and North Miami, and began dancing as a young boy in Miami’s underground B-boy scene. He competed in the Bboy Masters Pro-Am, a major event on an international circuit of B-boy conventions and contests. In 2009, feeling like he’d done everything he could in Miami, Boogz and a girlfriend moved to Los Angeles. 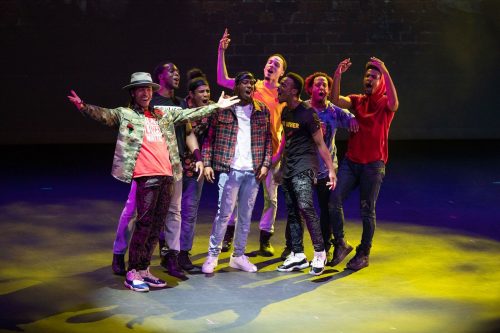 But things quickly went sour. He split with the girlfriend, struggled in the intensely competitive commercial scene, and found himself sharing a tiny apartment with four other guys.

“You see all these dancers on shows like ‘So You Think You Can Dance.’ I was like, ‘How do I separate myself? Should I be doing what they’re doing?’” he says. “I realized I had to combine the things I’m passionate about: storytelling in film and storytelling through dance.”

Depressed, broke and ready to return to Miami, Boogz went to a street dance jam at an L.A. studio, where he encountered Lil Buck.

“I’m letting out all my frustrations and this guy comes up to me and says, ‘Where are you from, dude? I’ve never seen anyone pop like that. Your style is amazing,’” Boogz recalls.

Buck invited him to join his crew, which performed on the sidewalks of Venice Beach for tips, a lifeline that enabled the Miami dancer to pay his bills and pursue his career. Boogz began making short films on subjects including domestic violence and suicide. In the next two years, the pair bonded over their dreams to take street dance beyond the street.

“He had a similar passion to take street dance to the next level,” Boogz says. “We were looking at the era of Gene Kelly, Fred Astaire, the Nicholas Brothers, when dancers were superstars. We said, that’s where street dance needs to be.”

Buck’s career took off around 2012, after a video of him improvising with world-famous cellist Yo-Yo Ma to “The Dying Swan” went viral. He went on to tour with Madonna, earn raves in the mainstream cultural press, and do commercials for Versace and Apple.

The two friends reconnected in Las Vegas in 2014, when Boogz got his own break performing with Cirque du Soleil there, just as Buck was leaving the show. The duo realized they finally had the resources and visibility to bring their artistic dreams to life.

They formed a nonprofit, Movement Art Is, and their first effort was “Color of Reality,” a 2016 short film they created in reaction to the wave of police shootings of young black men.

In the film, covered in a collage of paint by artist Alexa Meade, they flow from pain at television news to rejection on the street. “Color of Reality” went viral, pulling almost 400,000 views on YouTube.com. Other issue-driven dance films followed: “Am I A Man,” on the mass incarceration of black men; “Funeral for America,” where they bury racism; and a Ted Talk performance, “Honor Thy Mother,” on environmental threat, for the 2017 Vancouver edition of the famous conference. 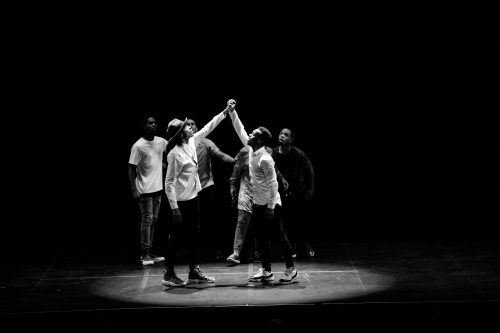 “Love Heals All Wounds” will be at the Adrienne Arsht Center for the Performing Arts on Feb. 8-9. (Photo courtesy of artist management)

“Love Heals All Wounds,” which they launched in 2018, is their most ambitious project yet. Boogz says it’s inspired by the often-overwhelming news of racism, intolerance, violence and environmental threats that have surged during the current administration – and by their own experiences.

“A lot of this comes from our lives,” he says. “I’ve been pulled over by cops and had illegal [things] happen to me. And, of course, everything going on in our country now inspired the work.

“You can’t be an artist and not be inspired by the times. We’re the newscasters, and we’re reporting live from the authentic stage of the people. It’s my duty to do that through my work. Hopefully, we won’t always have to do that. But until then, it has to be part of my life mission and art’s mission.”

This will be the first Miami performance of “Love Heals All Wounds,” and Boogz is thrilled. Along with Buck, he will join eight other dancers, spoken word poet Robin Sanders and violinist Jason Yang onstage.

“I’m so excited to bring it home,” he says. “Words can’t describe how I feel. For me to do this show in Miami means so much to me.”

He and Buck think art is more effective at inspiring people to take action and come together than political speeches and venting on social media.

“If I preach what I think, people might turn off. ‘Oh, here’s another rant.’ But when you allow people to take it in through movement, music, poetry, storytelling, they absorb it in a different way,” he says. “I’ve had people come up and say, ‘Your show has changed my whole outlook on life.’ You can’t put a value on that.”

What: Jon Boogz and Lil Buck’s “Love Heals All Wounds”