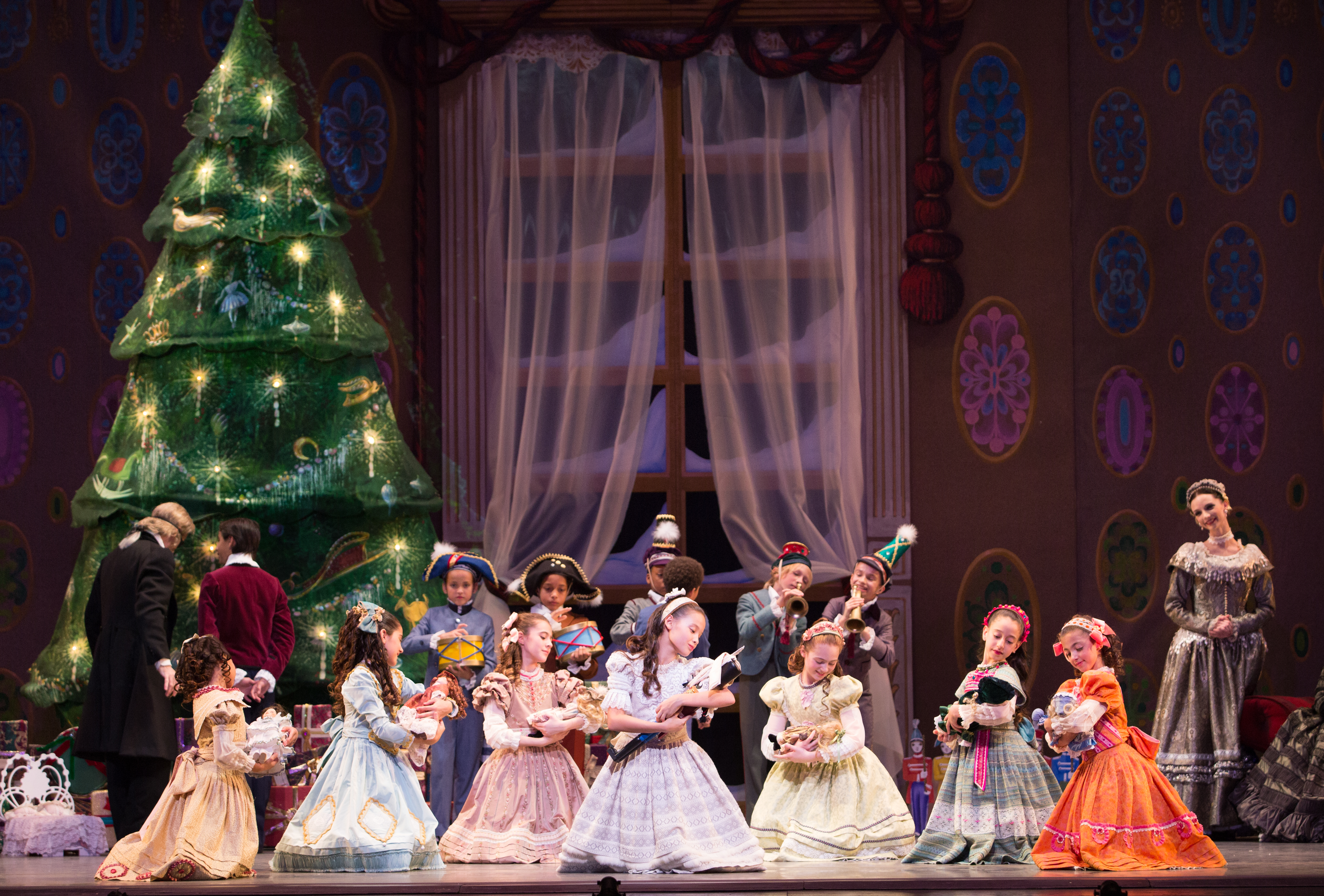 Miami City Ballet’s Miami-Dade run of George Balanchine’s “The Nutcracker” opened at the Adrienne Arsht Center on Friday, December 14th. The first thirty rows were packed with those like Nutcracker first-timer, Kayleigh Hines, or parents of performers like Maria Ortega and Linda Mondragon there to support daughters Alani and Aiko.

Last season MCB revamped the Balanchine classic.  Gone was the phone-it-in first Act.  The new sets and costumes by Ruben and Isabel Toledo were not only gorgeous, they multiplied the references to the Hoffmann short story, deepening the ballet.

For instance, Ruben Toledo’s version of the Stahlbaum family drawing room layers the walls with sapphire, emerald, and ruby medallions against a cinnamon background.  His sumptuous remake not only dazzles but emphasizes an easily overlooked detail from the story – the Stahlbaums represent a social class vying for the top of the social pyramid (important to note when a Queen presides over Act II).

Digital artist Wendall Harrington made other nods to Hoffmann by repeatedly repurposing Toledo’s interior with virtual reality accents.  At one point hundreds of mice heads appear projected on the drawing room medallions, a clear reference to the passage where Marie sees hundreds of mice eyes sparkling between the floor boards.

Isabel Toledo’s costumes provided visual motifs that reached across Acts.  The same chocolate tones in the overcoats of the party goers appeared in the Hot Chocolate outfits in Act II. The persimmon shade of one party girl’s dress showed up in the tulle of the Flowers who escorted Dew Drop.

But in the end the evening was about dance.  So – how was the dancing?

Act I was notable for the contribution made by seven-year-old Lucia Yanes of the Make a Wish Foundation who performed in Act I as one of the girls at the party.   Both Mia Niebruegge as Marie and Alastair Page as the Nutcracker brought theatricality and clarity to their pantomimed sequences.

Also memorable were Ellen Grocki, Alex Manning and Shimon Ito as Columbine, Harlequin and the Soldier.  Grocki, especially, captured the movement of 18th century automata by adding starch to an attitude hopped backwards and machine-like stiffness to her chainé pivots.

The MCB corps were powerful in the waltz of the snowflakes.  The dancers showed tight coordination and consistent attention to the ¾ time phrasing whether performing bourrées in fifth into center or pirouetting out and ending with a snap in cabriole.  Even with the powerful group effect Christina Spigner stood out with lovely fluidity in the wrists and elastic épaulement.

Gary Sheldon and the Opus I orchestra brought nuance to Tchaikovsky’s score, but special thanks goes to violinist Mei Mei Luo for her gorgeous ten-minute solo during the interlude after the party scene.

Act II opened to palm trees topped with lime slices and stage wings draped with floor to ceiling candy beings.  The act also turned in strong dances from all corners.

Jordan Elizabeth Long transformed the dance of Coffee’s harem girl vibe by not overdoing the role’s contortionism and by remaining on demi-pointe through sequences where often dancers opt for flat foot.  The way she angled her arms even suggested the hive Queen role she performed in last season’s, “The Cage”.

Shimon Ito, Tsukino Ishii and Ling Minucci were gorgeous, Ito in red with fuchsia accents, the women in black with gold print.  Often dancers rush this music which only aggravates the datedness of the choreography.  Ito undermined the stereotype by slowing down his delivery giving attention to transitions and pacing his jumps despite the insistent drive of the music.

Jennifer Lauren wowed in the role of Dew Drop.  She toyed with the waltz rhythm, her piqué pivots needling the stage to the oboes, and she captured the quality of the French horn with gravity-driven releases to her attitudes.  Her fouettés pivoted in attitude were gorgeous.

The new production surprised to the end.  In the roles of Sugarplum Fairy and the Cavalier, Tricia Albertson and Reyneris Reyes crafted their pas de deux floating through a gorgeous Albuquerque blue light engineered by designer James Ingalls.

Albertson and Reyes carefully set up the snapshot poses but attended equally to the transitions between them.   Partnered ably by Reyes, Albertson’s leg in forward attitude gradually threaded back into an arabesque penchée, her drifting bourrée positioned her well for three pirouettes en dehors. In one well-known sequence the ballerina seems to float across the floor in arabesque.  Albertson checked this box but right after performed an equally sculptural attitude – sans gimmick – that deserved (and received) an equally strong audience response.

Miami City Ballet performs George Balanchine’s The Nutcracker daily at the Adrienne Arsht Center through December 24th and the Kravis Center, December 28th to the 30th.

For tickets, call the MCB box office at: 305.929.7010 or purchase online at https://www.miamicityballet.org/the-nutcracker