Ecstatic Dance and “Horses in the Sky” at SMDCC 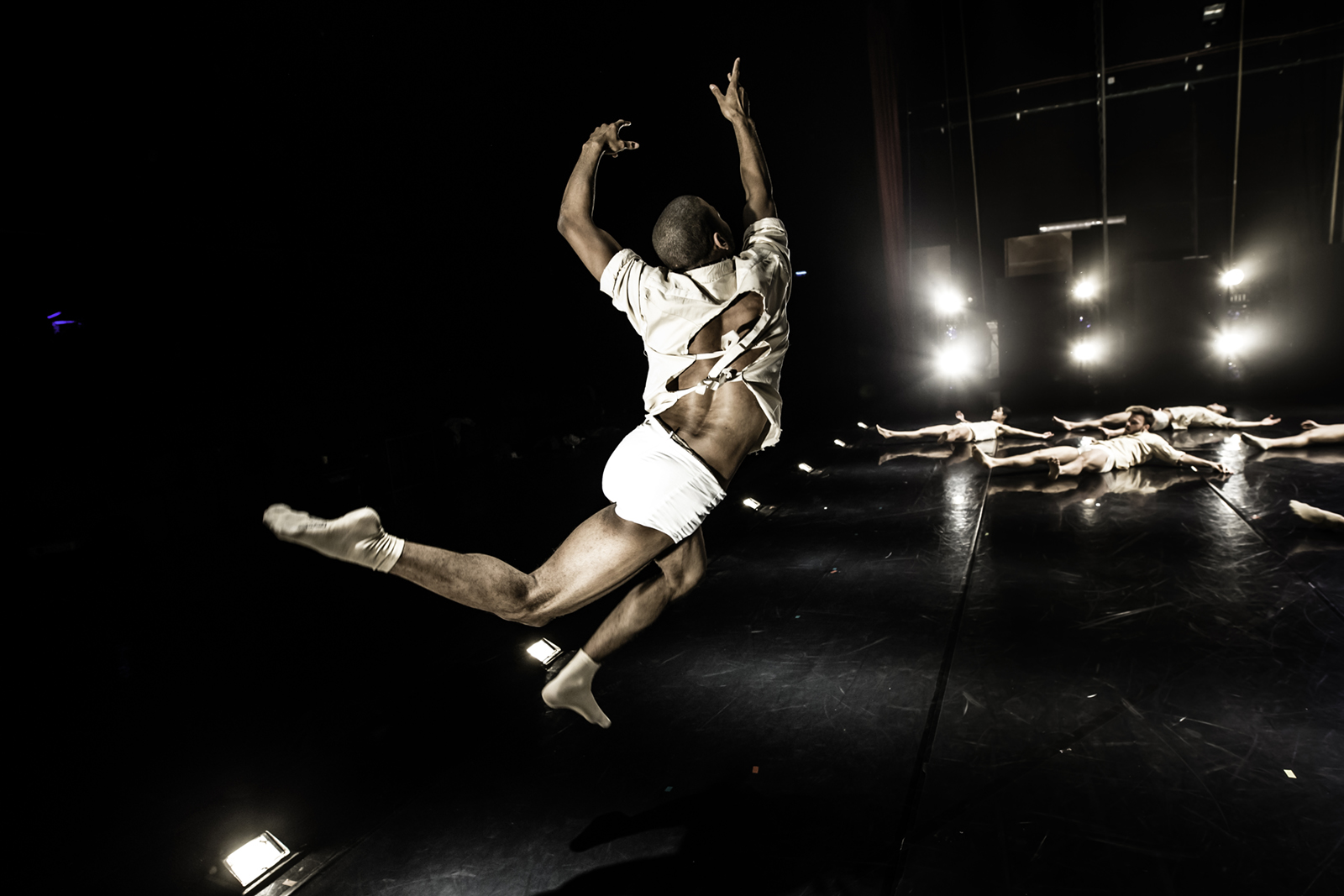 Google, “Horses in the Sky”, and the adjective “apocalyptic” shows up most frequently to describe the piece.  If meant to conjure roving zombie hordes or angels and the blare of horns then the description misses entirely.

But the root meaning of the word, apokalupsis, is to reveal the hidden.  In that sense the choreographies of “Horses in the Sky” act centrifugally, breaking apart quotidian actions like walking, turning stretching, bending, falling and crouching to expose the base factors at work in these actions from the stretch of the leg to how the body’s weight resists and rides gravity.

As Be’er explained during a pre-performance talk with dance critic, Jordan Levin, the dancers build their segments by varying these base movements according to speed, posture, balance, and momentum and by contrasting group with group, group to duet, and the couple to the individual. Be’er and the company cycled through scores of transitions in sixty minutes but rarely did the dancers present a simple idea without relentlessly complicating it.

For instance, the performance opened with dancers in tight fitting white shorts and loose tunics, and a stage stripped down to three rows of white vertical lights.  Some dancers walked rapidly while others shifted slowly from side to side to an insistent techno pop score, heavy with base, while another group raised their legs high in exaggerated slow motion.  The dancers, backlit in silhouette, revealed a commitment to precision, arms stretched at the same angle, legs lifted at the same moment.

This contrasted with a later duet by Megan Doheny and Martin Harriague who opened their sequence to the croon of a woman’s voice in Hebrew.  Together they balanced pivots and lifts, alternating between rapid shifts of direction and achingly slow turns in tune with held notes in the cello and the bass.  Two other couples then joined Doheny and Harriague.  Their bodies vibrated rapidly like voices echoing in a hallway while Doheny and Harriague communed at the front, Harriague motionless on his back with Doheny’s hands palming his abdomen as if engaged in faith healing.

With another shift of music, dancer Su Jeong Kim stood alone at the center of the stage.  As the singer clicked a rhythm Kim pounded the floor then pounded the air, shifting heavily from one foot to the next, mouth stretching wide in a silent scream.  Gradually she was joined by other dancers who chased her down and faced her, calmly raising hands to her pantomimed rage in time to shifts in the singer’s phrasing.

Be’er also explored how gesture generates meaning.  In one passage ten dancers lay on the floor as if sleeping.   As chords from a bandoneon swelled and the singer Björk set down a melody one dancer struggled to rise without the use of elbows and knees.  After struggling, she used the parts of her body that would cooperate, straining repeatedly through the back and neck to pull away from the floor.   As she writhed, octopus-like, the remaining dancers faced one another in groups of two and three, gesturing with fingers, wrists and elbows to the inflections in Björk’s voice, repeating the patterns until they resembled a language.

Toward the end, the company showed their versatility with mood as, first, David Warren Parker, bathed in dramatic red light, recited lines from the song, “Horses in the Sky”, by the Toronto band, Silver Mt. Zion Orchestra.  As the enigmatic lyrics invoked monsters, robots and angels, eight dancers knelt at the back of the stage, their arms overhead, while another dancer ran in place as if met head on by a fierce wind.  From the “end of days” vibe the sequence transitioned into eight male dancers turtling their heads, laying down tap riffs, stamping it out on the diagonal and just having fun to the hum of a male voice that sounded like someone musing at himself in a mirror and loving what he saw there.

Just as “Horses in the Sky” began to repeat sequences, it ended.  As opposed to running out of ideas Rami Be’er judiciously closed the circuit.  The audience was on its feet for fifteen minutes with more than a little appreciation for the willingness of the South Miami Dade Cultural Arts Center and managing director, Eric Fliss, for supporting such out of the box programming in South Florida.