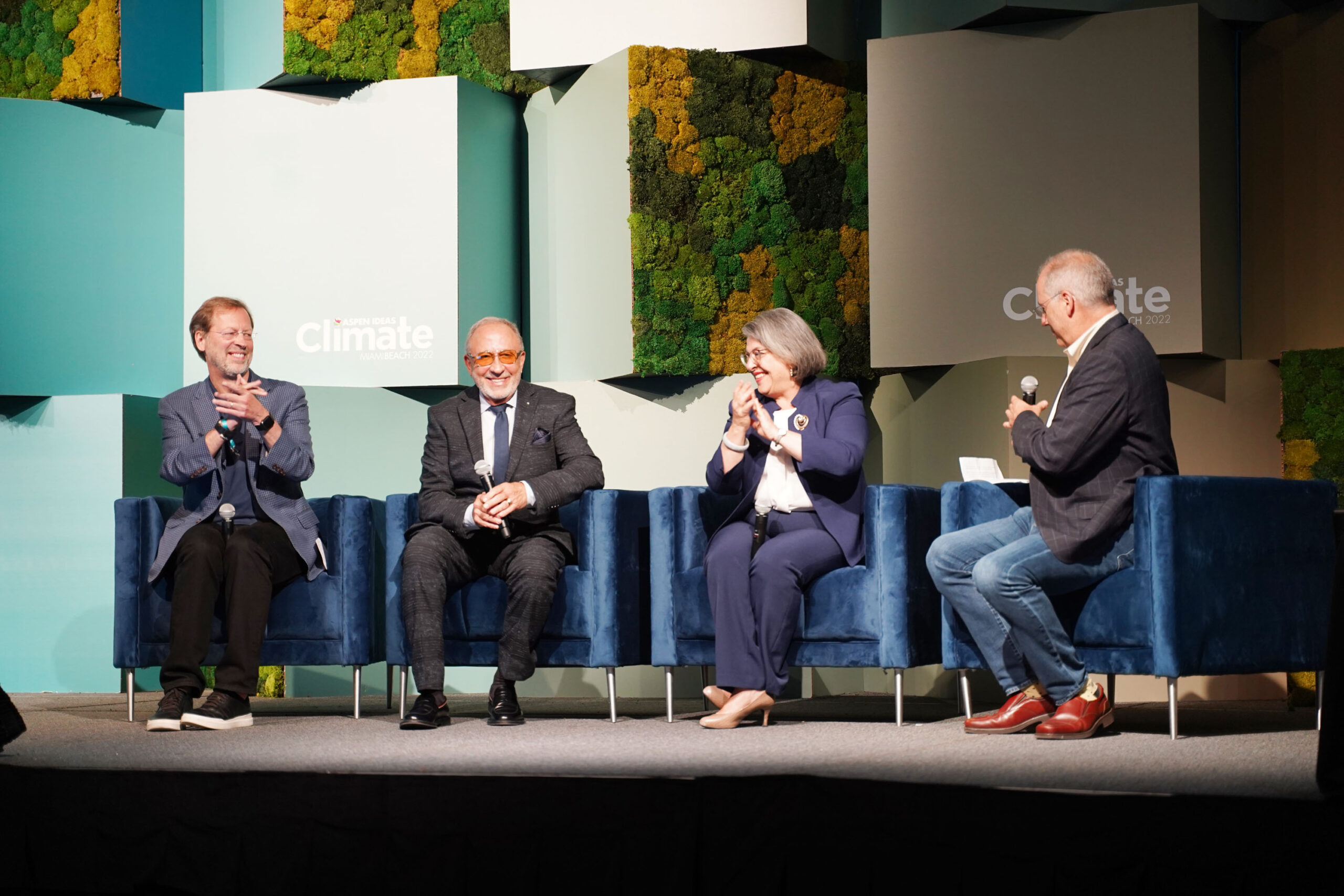 Aspen Ideas: Climate Miami showcased a myriad of transformative initiatives to tackle climate change, from the enthralling high-tech to more straightforward ocean and homegrown, to visual and performance art activations; all presented in and out of doors, on stage, in panel and breakout discussions, during field trips, and in curated site-specific performances.

“We Still Have Time,” a powerful climate justice song composed by Emilio Estefan and performed by Yailenys Perez to inspire a sense of urgency for climate activism, was premiered during the summit’s closing event. The music video was a motivational battle cry which emotively personalized the climate crisis, with footage of droughts, forest fires and flooding, then featured hope inspiring images of bio-diversity in nature and beauty in humanity. Estefan offered to stage a concert to inspire young people towards climate activism when the Aspen Ideas: Climate returns to Miami Beach in May 2023.

The Aspen Institute conference shared innovations in science and technology side by side with visual and performing art activations. For example, on stage during a panel presentation at the New World Center, a success story was shared about red seaweed based cattle feed, which inexpensively and easily reduces burping cow methane emissions by 80%. Later, at another venue, Miami Beach Mayor Dan Gelber introduced Marine Oceanographer and explorer Dr. Sylvia Earl, who helped launch The Reef Line project, a large-scale environmental art installation bringing together science, education, and tourism in the creation of an undersea coral habitat. 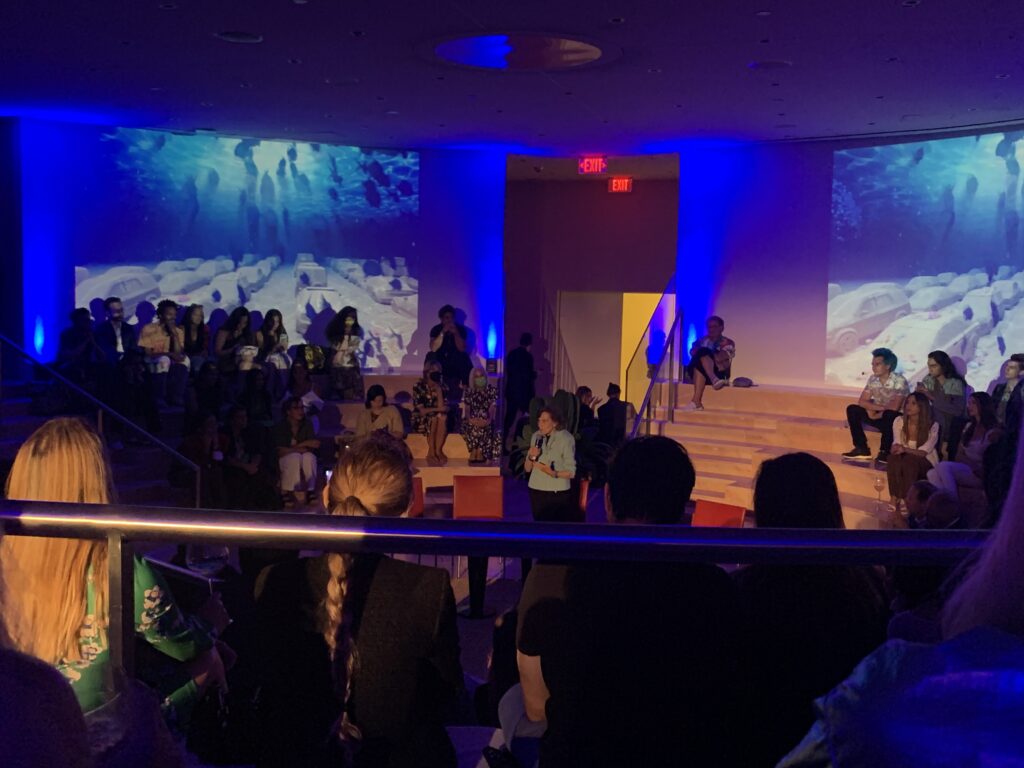 Over the three day summit, 14 local artists who represented diverse, wide ranging artistic disciplines were commissioned to present works. Michael Spring, Director of the Miami-Dade County Department of Cultural Affairs, stated, “These visual, performing and media artists are contributing powerful works of art that amplify and advance the ideas that will be discussed at the Aspen Ideas: Climate conference. Through this partnership with the City of Miami Beach, we are able to demonstrate how extraordinarily talented artists can create public understanding and foster activism necessary to address some of the most critical issues facing our planet.”

In film, Emmy Award Winner Oscar Corral presented his grassroots activism documentary, “Fellowship of the Springs,” about the endangered natural wonders of Florida’s artesian springs, while Lee Pivnik & The Institute of Queer Ecology, showcased the avant-garde film “Metamorphosis,” which informed with compelling imagery and word craft, and uniquely called for activism modeled after the life cycles of holometabolous insects, like butterflies. 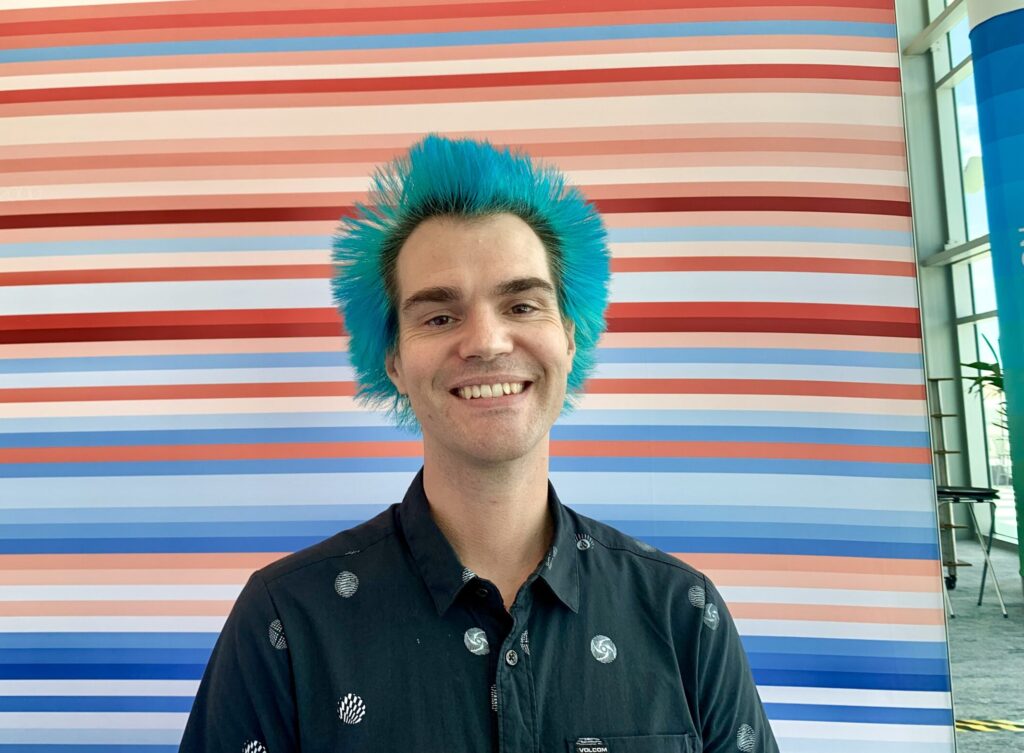 Miami based marine biologist and artist, Colin Foord of Coral Morphologic made quite a splash, with his aquatic blue hair, nightly Soundscape screening of their film “Coral City Fluorotour,” and as part of a panel featuring the ocean as a climate superhero. Foord presented his coral restoration program, The Coral City, with public access underwater 24/7 live streaming camera pool in at the entrance to PortMiami, which has connected a vibrant community of sea life enthusiasts reporting on daily online viewings, observations and inspiring conversations about Miami’s underwater biodiversity. 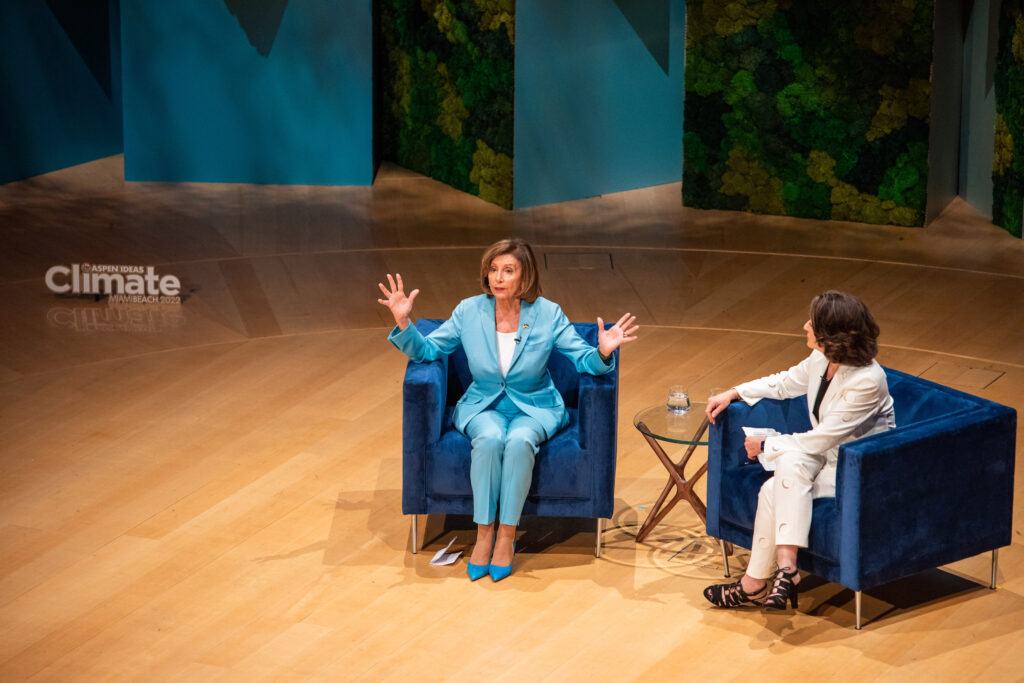 Throughout the summit, many speakers made strong statements that the Arts are the best way to inspire and motivate people to take action to tackle climate change.

Pelosi answered to immediate applause, “I’m a big believer that the Arts can save us… In the 19th century there was a movement which said that poets should talk more about science and that scientists should frame things more in an artistic way, so that people could understand and be motivated by it…Everything, whether it is music, whether it’s poetry, we have to connect with people in the way they receive information…We can come together, forget our differences, we listen to music, we laugh together, cry together, we are inspired together, we are taken to a different values place, where we can say, ‘Really we are not going to save this planet for our children?’”

At the urban oasis of the Miami Beach Botanical Gardens, after attending the performance of “Rosewater” by choreographer Michelle Grant-Murray, Mayor Daniella Levine-Cava said, “It is all about linking the arts with climate change and climate activism, because we connect through the heart first, and facts second. So, dance, visual arts, gardens. It’s what really draws on our heartstrings and gets us to realize what’s at stake. ”

Kitty Boone, Vice President of Public Programs and Executive Director of the Aspen Ideas Festival, confirmed Aspen Ideas’ commitment to the arts, “We have established art as an important part of our social fabric for some time at the Aspen Institute. Our current Arts Director, Erika Mallin, came out of the theater world and her responsibility is to figure out how to weave issues in the arts to broader issues in society. I’m fascinated by the way visual arts and performative arts can really be engaged in and enlivening issues.”

In summary of the Aspen Ideas: Climate Conference, Spring shared some great news for Miami’s artists about their continued commitment to the arts at Aspen Ideas Climate Miami, stating, “We already have talked to the City of Miami Beach, and we are both committed to continuing our collaboration next year. We are excited about the prospects for more innovative projects by visual, media and performing artists. …Involving the inspired and powerful voices of artists is more evidence of our community’s pioneering commitment to creative solutions to the crucial issues of climate change and resiliency.”