Review: Monsieur Periné and the Art of Serious Fun 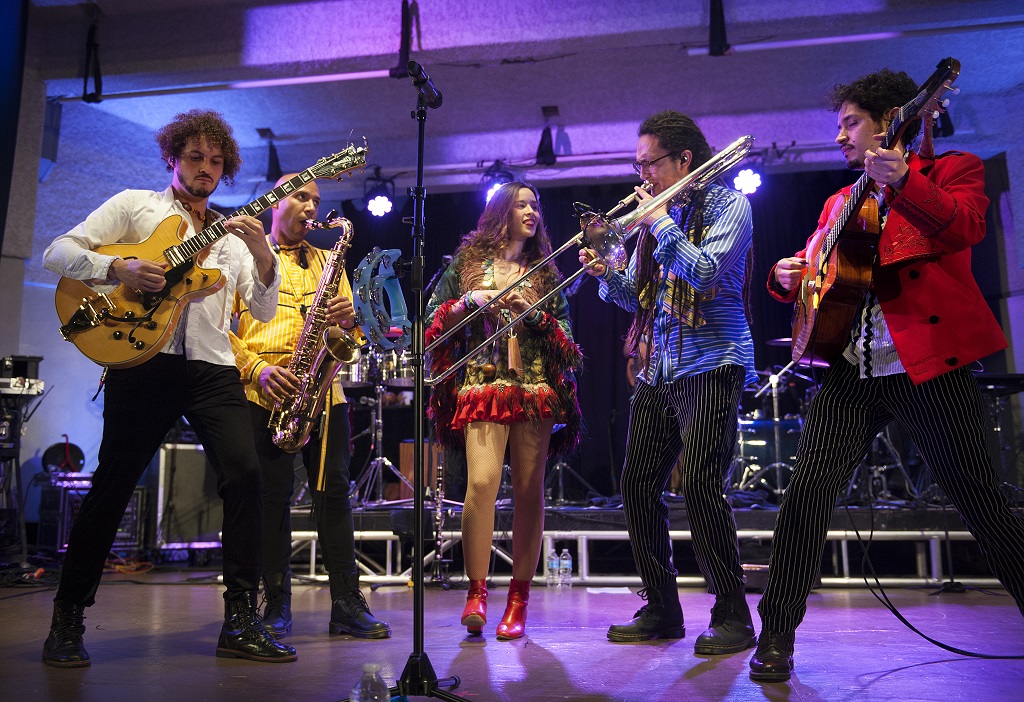 Getting people to have serious fun is no easy business. But at the North Beach Bandshell on Miami Beach, June 10, the Colombian group Monsieur Periné got the near capacity crowd to sing along, dance, follow the dips and raises on stage and just have a grand time while listening to a mix of funk, R&B, Gypsy jazz, old-timey swing and bits and pieces of half a dozen Latin American roots music styles.

Some of it can be chalked up to charm, and the engaging stage presence of vocalist Catalina Garcia. But going most naturally from “Bailar Contigo,” a song that with its neo-bossa/samba feel could be in Bebel Gilberto’s repertoire, to “Tu M’as Promis,” a song set in a classic 1930s Gypsy swing and sung in French and Spanish; or having an Andean charango in “Tarde,” a song whose groove and accents bring to mind the classic jazz standard “Take Five,” doesn’t just happen. For starters, it requires smarts and a lot of work.

With Monsieur Periné— anchored by the core trio of García, vocals; Nicolás Junca, guitar; and Santiago Prieto, string instruments and vocals; augmented Sunday by a five piece ensemble — where you start a set or a song might not be where you end up.

More often than not, they seem to be out to play with their listener´s cultural compass, tweaking expectations and moving the points of reference. But because they do it with a sense of humor, their challenges have a softer edge — and yes, you can still dance along.

They once called their sound “suin a la colombiana”(Colombian-style swing) but it has continued to evolve and it seems to have spilled past early labels. Success (a Latin Grammy as Best New Artists in 2015; signing with a major label) has brought with it more of a pop feel to their music on record. But there’s still substance and a subtly subversive core to their music – and live, they know how to also make it entertaining and fun.

Musical revolutions have been made with less.

Miami-based Venezuelan producer and deejay Mr. Pauer (aka Toto González) opened with a set in which he mixed electronics and a live, roots-based band. The next tradition, his performance suggested, will be plugged in. An artist worth following.