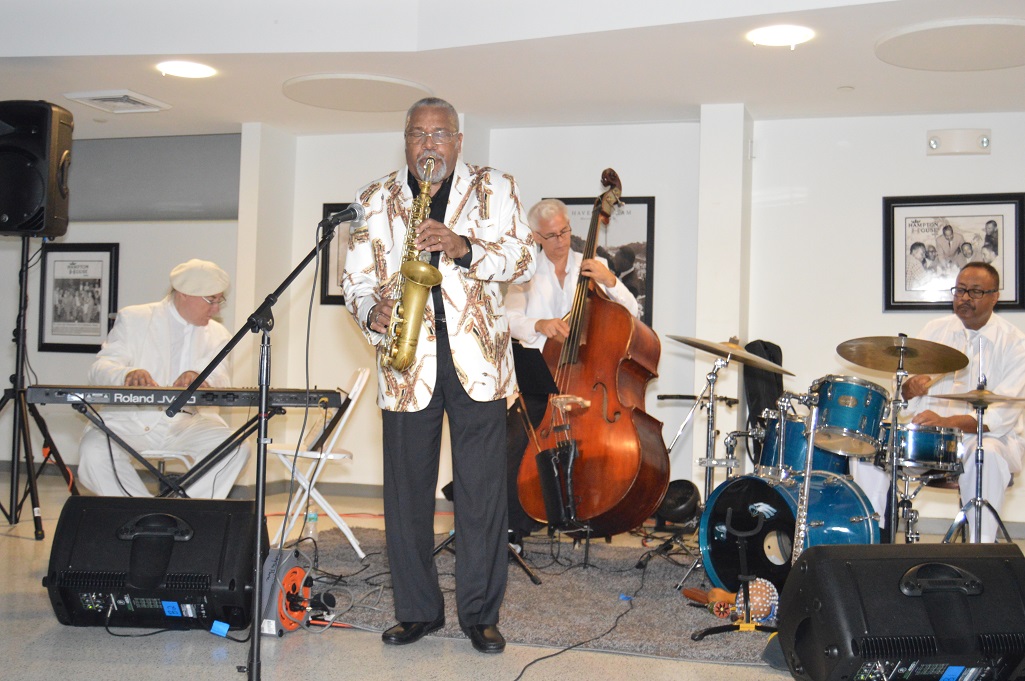 Saxophonist Jesse Jones Jr. and his quartet offered a potent, wake-up-the-dead serving of soul-jazz and hard bop at the historic Hampton House, in Miami, in his early set Friday, July 27, that honored the masters that once passed through the place. That’s the way to celebrate a rebirth.

Jones, who as he reminded the audience, not only played the Hampton House as a youngster but met his wife there, suggests an old-style jazzman, strong as a player but also an entertainer. He has a round, muscular tone and can, in the span of a solo, go from abstraction to church and back. His playing suggested a crooner or a soul singer one moment (he also sang vocalese at various times throughout the set) and unspooled probing boppish lines the next.

Clearly at home, he didn’t need much encouragement to turn the set into a house party.

Jones set the tone early, paying tribute to Ft. Lauderdale native Cannonball Adderley, Jones’s inspiration and once a House regular, with a scorching “Del Sasser,” before moving on to pianist Horace Silver’s “Song for My Father” and bassist Oscar Pettiford’s classic “Bohemia After Dark,” another Cannonball favorite — and we were off.

The show was part of the first jazz series of the newly reopened House, and the restored multipurpose room, set with tables and a simple stage space, was nearly full. In fact, by the look and sound of it, more than a few old customers seemed to come by to check the place, enjoy the music and perhaps relive good times.

I can’t remember when was the last jazz show in which I heard the audience giggling, holding a conversation with the artist on stage and in fact, actively engaging both the players and the music. It seems so long ago, but jazz was once popular music — and fun.
More, please.